ToolGuyd > Power Tools > Cordless > World’s Second-Ever Cordless Table Saw: Metabo 18V x 2 with 10″ Blade and Built-in Stand
If you buy something through our links, ToolGuyd might earn an affiliate commission. 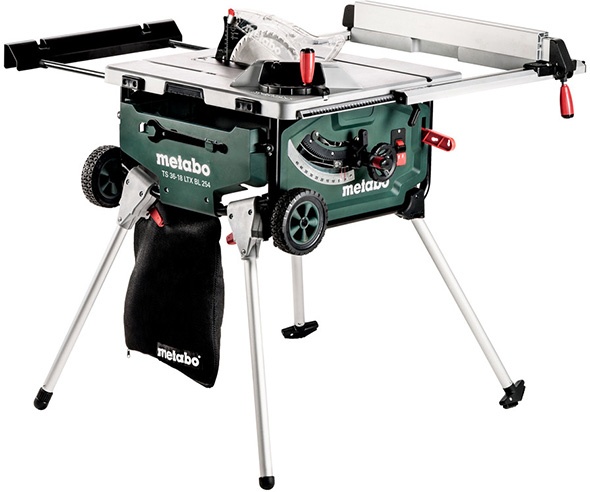 Metabo has come out with their TS 36-18 LTX BL 254 cordless portable table saw. It features a brushless motor and is powered by 2x 18V batteries, operating at 36V.

All that alone makes for a convincing tool, but that’s more. 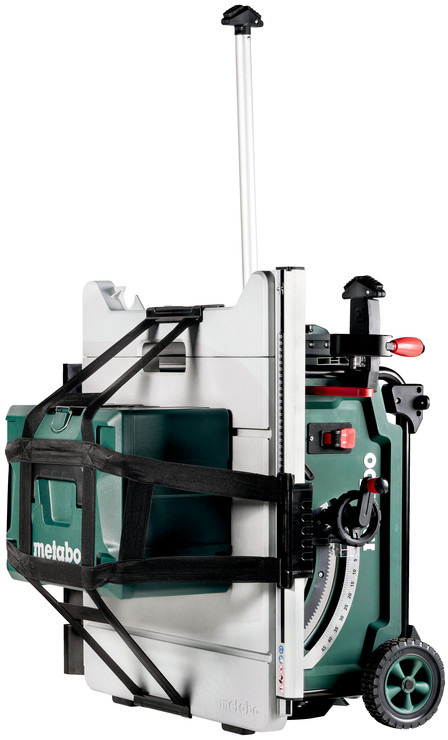 It has a built-in handle and wheels, not unlike the Ridgid R4516 that I recently posted about in a pre-holiday season table saw deals post. 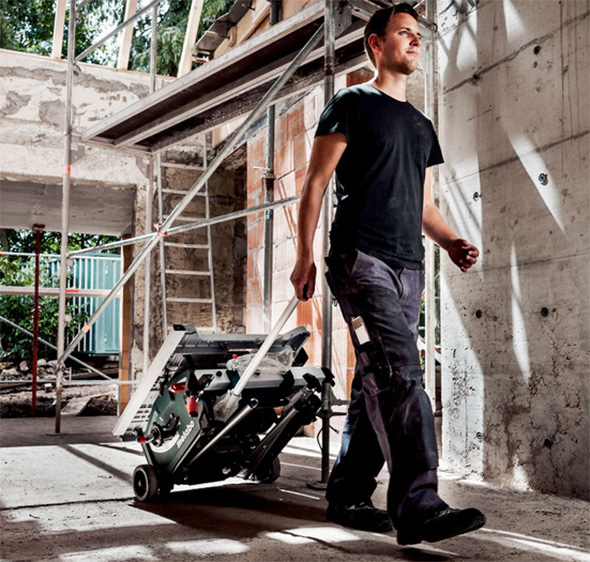 That built-in handle I was talking about? That’s one of the legs. Well, actually, it’s either of the front legs. Both have T-shaped feet that double as handles.

But you don’t have to extend the legs – the table saw is designed for use with or without the folding stand deployed.

Quick change between sawing at ground-level or when standing up thanks to integrated, folding stand.

Oh, and one more thing – it has some form of integrated dust extraction:

A miter gauge is included, as is a push stick, dust bag, and “fixation strap” for MetaLoc case, and a MetaLoc case.

The MetaLoc case is a Systainer-like case, which is likely intended to house your batteries and chargers. The kit ships with (2) quick chargers and (4) 18V 7.0Ah LiHD battery packs.

It weighs 34.5 kg, or around 76 pounds. It doesn’t look like the integrated base can be removed, but at least it looks very compact and neatly stowed within the saw’s enclosure.

Right now, the saw is only described for international release, and we’re waiting to hear back about USA availability. The only price I’ve seen so far was from a Netherlands retailer, who had the saw kit listed for a little over 1400 Euros excluding tax, or around $1650 USD.

This would be the second-ever cordless table saw that I’ve heard of, with the first being the Dewalt 8-1/2″ FlexVolt table saw.

I find myself both excited about the new Metabo cordless table saw, and very hesitant.

I like the idea of a 10″ saw blade, integrated dust collection (anything is better than nothing), built-in roller wheels and handle, and the built-in collapsible stand. But all that contributes to cost and complexity, making this a very pricey saw.

The saw, plus the portable power station, plus 4 of Dewalt’s highest capacity battery packs will set you back $1296. You’ll need an extension cable to use the power station as a charger, or a separate charger or two. You can save a bit of money if you shop carefully during sales.

It’s obvious that Metabo engineers achieved a lot, but I’m a little concerned about how competitive this saw will be in the USA, if it makes it here.

Dewalt is surely working on another FlexVolt cordless table saw, perhaps a 120V Max model with 10″ blade and hybrid AC compatibility. By perhaps, I mean almost definitely. I’d bet it’ll cost a lot less than $1600. At that kind of pricing, I’d like to see SawStop-like active injury mitigation technology built-in.

Thoughts? Is this something you would buy?