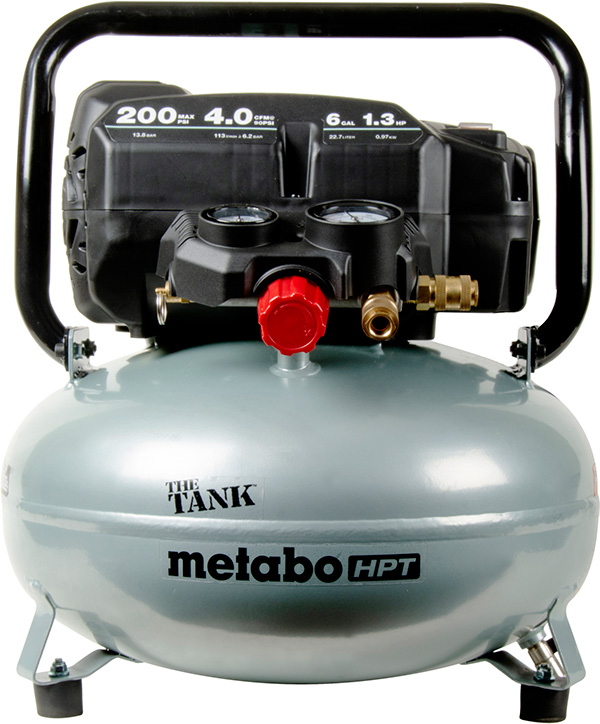 Metabo HPT, formerly Hitachi Power Tools and known as HiKoki internationally, has introduced a new corded pancake-style air compressor, which they are calling “The Tank.”

The most important thing to know about the Metabo HPT “Tank,” model EC914S, is that it features a 6 gallon air capacity with 200 PSI max pressure rating.

This higher pressure rating allows The Tank to deliver 4 CFM at 90 PSI.

Basically, the higher pressure rating means that you can fit more air inside its 6 gallon air tank. Given the same volume air tank, and the same set outlet pressure, a higher pressure compressor will deliver air for longer. Or, as seen with the CFM rating, it can deliver a greater airflow to power more tools and potentially greater power.

Simplifying things (air is not an ideal gas), the ideal gas law says that the pressure (P) and volume (V) are proportional to the amount of substance (n), and temperature (T). R is a constant.

So if you have two 6-gallon air compressors, and ignoring any temperature differences, the one with the higher pressure rating will hold more gas.

Got it? Among 6 gallon air compressors, a higher tank holding pressure means more air in tank.

Metabo HPT says that The Tank, with its specs, will deliver 30% more airflow than other compressors.

It has 2 quick-connect couplers, a metal handle, low maintenance oil-free design, and it weighs 41 pounds.

The 41 pound weight is said to be 22% lighter than Metabo HPT’s traditional EC99S twin-stack compressor, model, although it is unclear why this comparison is being made. 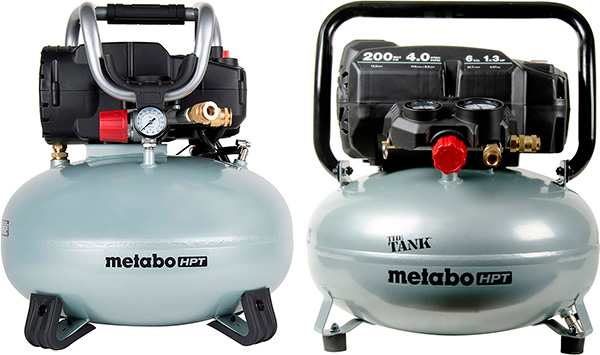 Metabo HPT says that this new air compressor delivers 25% greater PSI than their basic pancake compressor, which is true, but if you look at the new model compared to the basic model and its 150 PSI pressure as the reference, the difference is actually 33%.

What all this comes down to is the new air compressor being designed to handle greater airflow and thus greater simultaneous loads from multiple nailers.

For individual users, the higher pressure rating could potentially allow for longer work between air pump cycling, but it could also mean longer fill-up times, depending on motor speed. Fill-up time, cycling pressure, and duty cycle were not discussed in press materials.

New Craftsman V20 Cordless Air Compressor (CMCC2520M1), and How it Compares to Dewalt FlexVolt and Others