ToolGuyd > Power Tools > Cordless > New Milwaukee 2018 Heated Jackets Include their USB Charger and Power Source
If you buy something through our links, ToolGuyd might earn an affiliate commission. 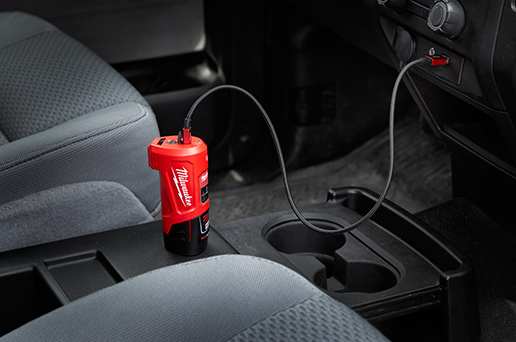 Milwaukee is including the M12 Compact Charger and Portable Power Source, with select items in its line of heated gear this season,  allowing users to charge their batteries the same way the charge their phones, tablets and other electronic devices, instead of having to use the usual M12 battery charger.

On the surface, this probably isn’t a big announcement, especially for tradesmen and women who likely have an ample supply of fresh batteries or easy access to a charger on their job sites.

But for the many users — like myself — who use the heated gear as their everyday winter attire, this is a pretty cool feature. I’m fortunate to have several chargers, so I keep one in the house, one in the garage, one in the basement, and so on – there’s always a charger where I might need one.

Still, if I’m heading out on an assignment — like, say, a high school football game — I’ve got to make sure all of my batteries are charged and to remember to pack them all in my bag. Dragging along a charger is impractical, and most times I can’t even find some place to plug in my computer, let alone a typical M12 charger.

The same goes for when I’m driving. Yes, Milwaukee offers a car adapter for their heated gear, but while available online, they’re hard to find in stores, and those are the kind of things you don’t think about until you need them. There’s also an M12 DC charger, but that little number is pricey, not to mention even more difficult to find on store shelves.

Now, with the new M12 power source, you can just plug it into a wall outlet – or USB post – just like you would with your phone, tablet, or other USB-powered gizmo or gadget. Obviously, it’ll take longer to fully charge a battery pack — around three hours for a 2.0 battery, according to Milwaukee — compared to the usual 30-minute charger, but if you’re sitting at the office all day, you’ll be at full strength for the commute home.

The new M12 charger and power source will be included with all Milwaukee Toughshell, Quietshell, and the new-to-the-line Axis heated jackets, while heated hoodies and heated vests will continue to ship with the standard M12 battery holder. That’s for the bare tool options, the kits also come with a battery pack and AC adapter.

Of course, you can also pick up the “travel charger,” as I like to call it, on its own if you’re just looking to upgrade your existing collection of M12 heated gear. When you buy it separately, the 48-59-1201 comes with the USB cable and AC adapter.

To clarify, when bundled with a 2018 heated jacket, the new M12 charger and power source doesn’t come with the USB cable or AC adapter when you buy the “bare tool” version. The AC adapter and USB cable are only included in the kits, or if you buy the device separately. But the beauty of it is that you can use standard MicroUSB charging cables or adapters without issue.

Since this item has already been available for awhile, I’m sure some of you are already using it, and so I’d love to hear your thoughts in the comments below.

The new MicroUSB M12 charger and power source comes with its own AC adapter and USB cord, but can work with others.

Milwaukee emphasizes that it is compatible with any USB output, including in-vehicle USB ports.

It can also be used to power or charge other USB devices, with a 2.1A max output. There’s also an on-board battery fuel gauge.

I’m really excited about this – perhaps too excited, to be honest. But small things like charging a battery via USB can make a big difference, especially when freezing your rear end off during yet another Polar Vortex.

As I write this piece, I keep flashing back to the day before Christmas last year when I had to make the trek from Milwaukee to Green Bay to cover a Packers game at Lambeau Field. Earlier that week, I saw the DC adapter at a local Farm & Fleet, but passed on it, thinking I had more than enough batteries. But about 20 minutes into the two-hour trip, the heater on my truck finally died, and because I was already late, I had to keep going, figuring my coat would suffice.

It did (though my legs and toes were another story), but I had burned through the two batteries I brought for the trip before I even arrived in Green Bay, and since every hotel in Wisconsin is booked solid when the Packers play, I had no choice but to make the drive back that night… after dropping $250 on a long-sleeve shirt, hoodie, and socks (especially painful since I’m *not* a Packers fan in any way, shape or form.)

That drive was probably the coldest I have ever been in my life. I looked up my game story from that night, and the temperature at kickoff was 10 degrees, with a wind chill that dipped well below zero and only got worse in the overnight hours.

Now, had I paid better attention, I would have discovered this product on shelves when it came out last fall, but I didn’t. Same goes for NPS; maybe because it was my group’s last rotation of a long day; maybe I was still having fantasies of using the table saw to build my new kitchen cabinets, or maybe I was just mesmerized by the sweet, sweet trucker hat (I’m a sucker for hats, with my collection at over 300 hats and growing, so bear with me), but I completely missed it when the product manager mentioned this addition to the 2018 line.

Needless to say, this is one Milwaukee M12 upgrade I’m definitely making before winter hits. Since it can also be used with an M12 battery as a USB power bank, chances are I’ll be able to use it throughout the year too.