ToolGuyd > New Tools > New Milwaukee 52″ Mobile Workbench
If you buy something through our links, ToolGuyd might earn an affiliate commission. 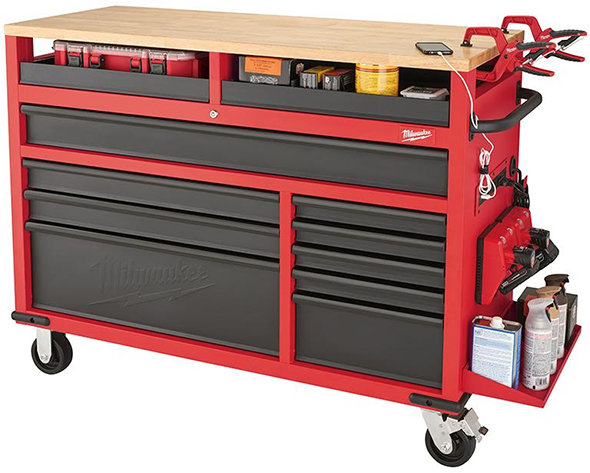 Milwaukee has come out with a new 52″ mobile workbench, 48-22-8522, which features a raised work surface and pull-out shelf-drawers.

Husky recently came out with an updated 60″ mobile workbench, and it had me asking “why would I buy Milwaukee’s?”. I love the Husky’s added benchtop and drawer depth.

When the press release for this 52″ workstation came in, I was practically bouncing. I find some of its new features, despite its 8″ shorter length, to be highly appealing.

Update: The worktop and cabinet depth is a respectable 22″ deep. 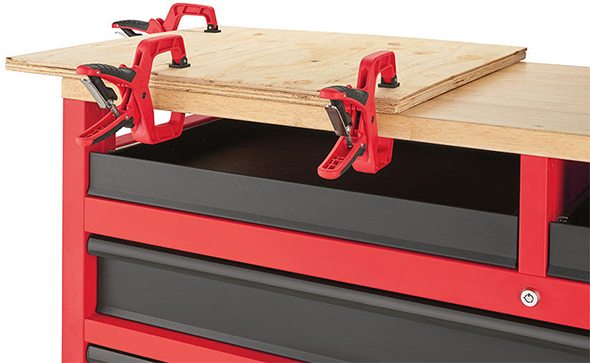 First, there’s a raised work surface, meaning you can clamp things down. You get this under-the-benchtop clamp clearance under the front and both sides. The back is fully enclosed.

This should also make it easier to mount things to the benchtop, such as if you wanted to mount a vise with through-bolts instead of lag screws.

Then there are the pull-out trays. I like to call them shelf-drawers. They’re basically drawers with short fronts and extra tall clearance. 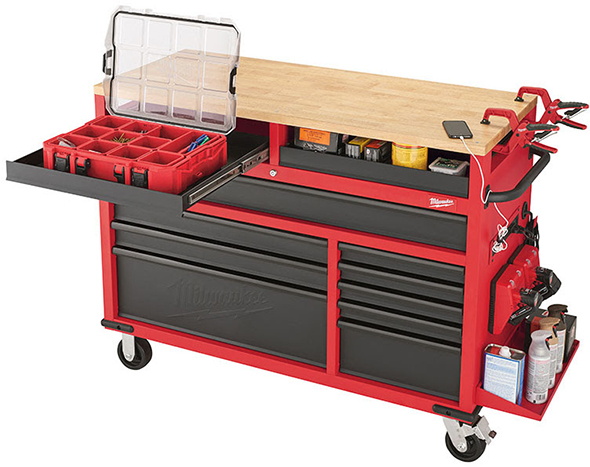 The box wouldn’t be complete without some of Milwaukee’s standard side-panel details, such as a tray, mounting points for M18 chargers, a power strip with USB charging ports, and a tubular handle.

I’m liking the configuration too – a full-width drawer and 2 banks of drawers for a total of 9 drawers and 2 pull-out trays. So let’s say 11 drawers. 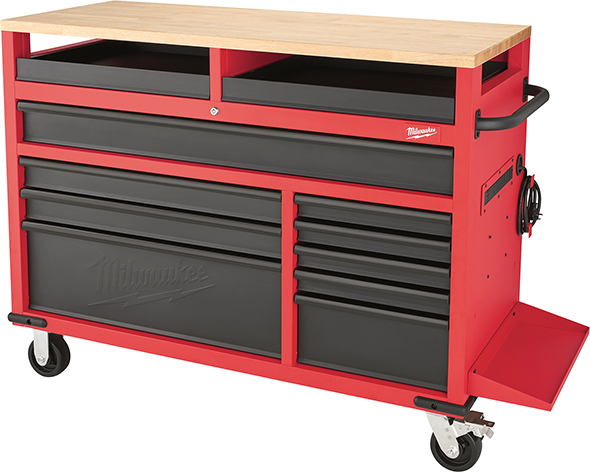 This is what you get. No clamps, tools, or supplies are included, just in case you were hoping. 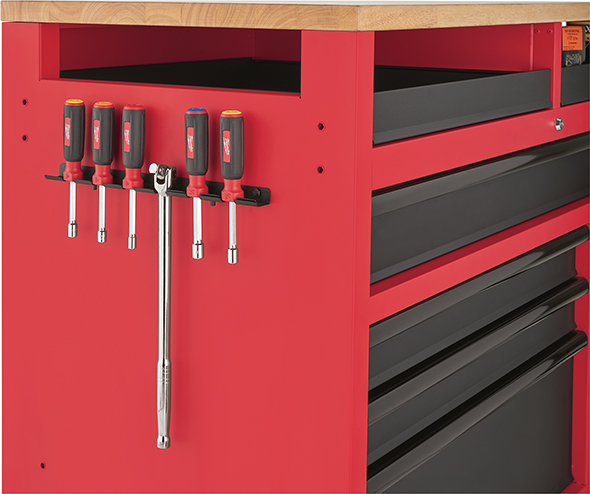 There’s an included screwdriver and like-shaped tool holder, but there are 2 other things to see here.

First, it clearly shows that the back panel is enclosed, meaning you have open access at the front and both sides, but not the back.

Second, you can reverse the side handle to the left side if you choose to. It looks like there are mounting holes for the side panel shelf as well. 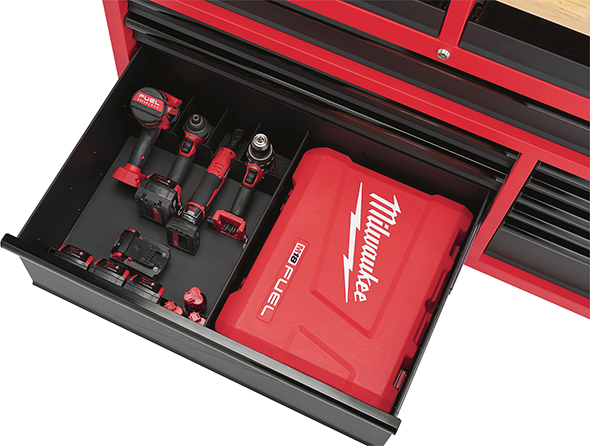 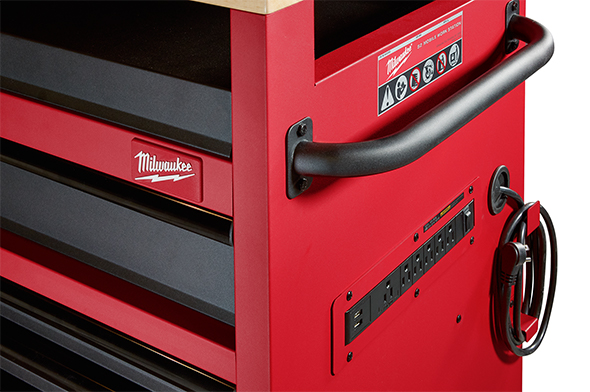 The power rail has an on/off button, and Milwaukee’s usual cable wrap. I have yet to install the cable wrap on a test unit – I instead push the power cord slack back into the box through the grommet, nesting it behind the drawers. 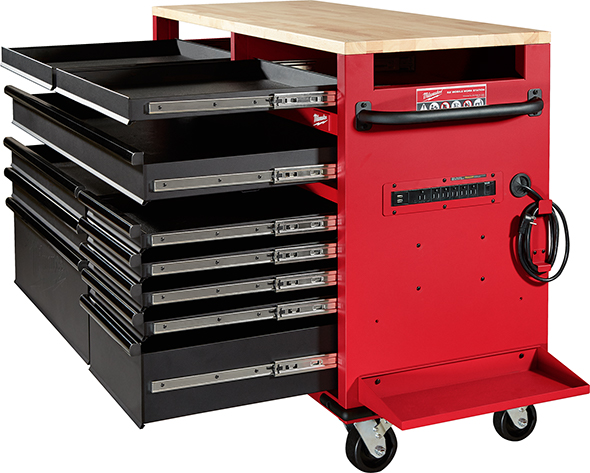 Never do this to a tool box – I’ve seen them topple forward. The left bank of drawers aren’t shown, but it’s safe to say that none of the drawers on the right have doubled-up drawer slides. Not even that full-width drawer, which I’d guess (and hope) has a third slide on the bottom at the center.

Is it me, or does it look like the drawer slides are attached crookedly and off-level on those drawers? If so, and the drawers are level but the slides are slanted downwards a little, that would help them self-close a little bit.

Here is the Milwaukee 60″ mobile work center, for comparison.

The new 52″ mobile work station offers a different featureset, but also looks simpler. It’s smaller, and has 1 lock instead of 3. It looks like perhaps the 2 pull-out trays are not lockable.

I wish that Milwaukee equipped the new 52″ workbench with 4 lockable swivel casters, instead of 2 swivel casters and 2 fixed casters. That would make this a far more mobile work center in my opinion. But I suppose one could always build a mobile base with 4 swivel casters if they wanted it to be more mobile.

The 52″ workbench is 8″ shorter than the 60″ model, but since the 60″ model’s cabinet is longer, this should mean that the drawer banks are wider. It looks like it’s the drawers on the right side that are wider. This is one more thing to like about this model.

I like that there’s a full-width drawer, and hope that Milwaukee went with a third drawer slide underneath the drawer at the center.

The pricing is fair too. Milwaukee could have made it cheaper, but I’m happy that they instead chose to make this shorter model more functional.

Thank you to Nick for the heads-up!