ToolGuyd > Power Tools > Cordless > Hands-on: Here are Some Things I Learned About Milwaukee’s Cordless Nailers!
If you buy something through our links, ToolGuyd might earn an affiliate commission. 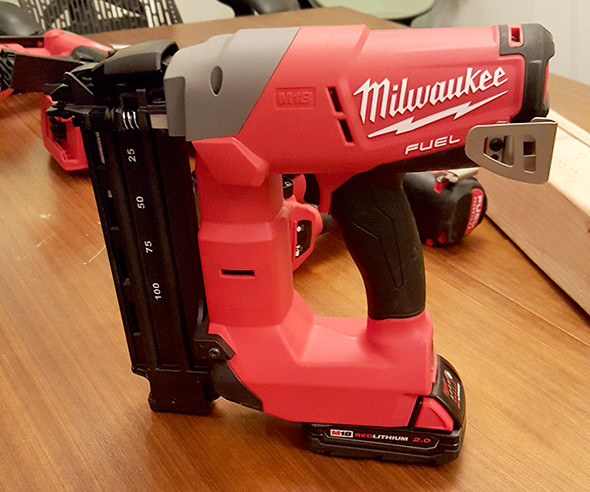 In case you missed the news post, Milwaukee is coming out with a new line of M18 Fuel brushless nailers!!

We had the opportunity to take a quick first look at Milwaukee’s new M18 Fuel nailers! Woo!

First off, they’re a little large, and a little heavy, but we expected that. Frankly, I don’t think most users will mind, due to the power, speed, cordless convenience, and runtime. Oh, and the lower noise from not having an air compressor nearby.

But really, the most surprising part is this: Milwaukee M18 Fuel nailers have a built-in nitrogen spring mechanism! That is what makes them so fast and powerful. Well, that and a lot of time and effort by Milwaukee’s product engineers.

No, it’s not a fuel cell. No, it shouldn’t require any user actions. It’s a sealed self-cycling nitrogen actuator.

So although Milwaukee doesn’t use this particular language, it might be safe to say you will likely get air-like performance.

I drove in 2 nails with the Milwaukee 18 gauge brad nailer. I don’t recall what the target material was. It was either solid oak (laminated from several smaller pieces), or a thick piece of oak attached to structural wood.

The brad nailer can sink 2″ nails into solid oak. That’s what it says on Milwaukee’s product page.

There was a diagram, showing how the Milwaukee M18 Fuel can out-drive competing cordless nailers. I believe it – the brad nailer did a great job driving the 2″ nails flush with the worksurface. Well, very nearly flush. The first slightly caught my nail as I scratched over it, the second didn’t.

Once I have a sample in-hand, I’ll be in a better position to tell you how powerful the brad nailer is. From what I saw, it’s at least as powerful as the air nailers I’ve used in the past.

The brad nailer stands up! Try that with an air nailer!

The jam-release lever is huge (that’s a good thing) and easy to use.

Some might not like the placement of the belt hook, but it makes sense to me. I hung it off my belt – not a tool belt, but regular pants belt – and it felt alright. It’s not a featherweight tool, but it was nicely balanced, which helps.

Keep in mind that it hung off my belt for a total of maybe 20 seconds. Ask me again how I like the weight and balance after I use it for a lengthy project. Although, I’d probably stand it upright or on its side more than I’d wear it on my belt. The finish nailers can all be placed down on their sides too. I believe the straight finish nailer can also stand upright on its battery.

Question: Do you hang your nailers from your belt, or do you place them down somewhere when taking a brief pause?

Milwaukee engineers worked to make sure that the non-marring pads are securely fixed to the nailers’ noses, but you can still pop them off if needed, or when it’s time to replace them.

Come to think of it, yea, some of my nailers have these little vinyl non-marring pads that have fallen off at times. Has that ever happened to you?

The non-marring nose pads of the finish nailers were larger than I’ve seen on other finish nailers, but nail placement visibility is still excellent. They were angled, so they shouldn’t get in your way as you use the nailers.

Hmm, this is in contrast to the Bostitch Smart Point nailers that Clayton reviewed for us last year. Nail-placement accuracy is definitely something I plan on testing once I have more time with these nailers.

I popped off 2 nails with the brad, and then asked the product manager to fire off 3 nails as quickly as he could. There was no lag, no waiting, no delay.

If I recall correctly, the cycle time is said to be something like 0.08 seconds. And I believe that the product manager also said that the fastest a user might drive nails in at, is typically 3 per second.

So when Milwaukee says zero ramp-up time, what they mean is that M18 Fuel cordless nailers will always be waiting for you, and that you will never be waiting on the nailers.

Assuming I’m not mistaken about the 0.08 second cycle time – and I don’t believe I am – you would have to drive in at least 13 nails per second before outpacing any of the nailers’ cycle times.

Update 1: Yes, the actuation time is 0.08 seconds for a single nail to file. The full cycle time, including reloading, is 0.3 seconds. So the fastest the nailer can drive nails is ~3x per second.

Update 2: There is a limit as to how fast you can fire the nailer. If you bump-fire many nails as fast as you can, you will hit a thermal overload protection scenario. Milwaukee says that this should not happen in real-world use.

Even in bump-fire mode, that’s just not possible to do hand-held.

Can you tell that I was impressed?

Questions? What else do you want to learn about Milwaukee’s new M18 Fuel nailers?