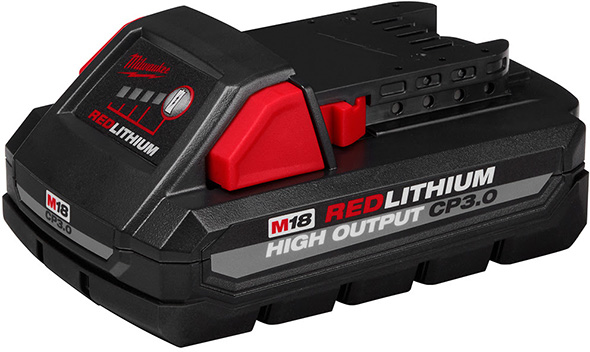 A reader brought up a good point in reply to our post on the new Milwaukee M18 dual port Rapid Charger.

As with all Li-ion batteries I’m familiar with the charge cycle rate seems to effect the actual battery life span.

Has anything changed with all these newer power tool commodity cells?

I touched upon this in my Milwaukee M18 Super Charger post, as it came in the comments section. I also followed up with Milwaukee, who provided the following insights:

This [super] charger does not have a negative impact on battery life. This is why packs outside of High Output will not charge faster vs rapid. The high output packs can handle this faster rate without degrading life due to the chemistry and mechanical design of the cell tech.

I would assume that the same considerations were made when they designed the Rapid Charger, which preceded the Super Charger, and this dual port Rapid Charger which came later.

They also provided the following:

No, there won’t be a difference in lifespan of batteries between standard, rapid, and super charger. Packs outside of High Output have a ‘cap’ where they simply will not charge faster on this charger. That ‘cap’ is comprised of many things, like cell chemistry. The high output packs can handle this faster rate without degrading life due to the chemistry and mechanical design of the cell tech.

How do they know? How can they be sure?

Here is where a smile comes to my face. A couple of years ago, my visit to Milwaukee HQ, as part of a past new tool media event, we toured the battery lab. I looked around and took note of all the testing setups and battery charge-discharge stations.

Then, for the NPS19 tour of Milwaukee Tool headquarters, we got to visit the battery lab again. Unfortunately, we didn’t see the battery failure and explosion-proof lab, which was moved to the other building. Maybe that’ll be a treat for next time.

I asked (begged) for permission to walk around the lab during the usual “intro to Milwaukee M18 battery pack technologies” presentation, which was at the front of the room, and with my wish granted I did a few laps through the room with my hands firmly down at my sides or behind my back.

I asked a couple of questions about what I saw, and filled in other details based on prior knowledge and familiarity with lab and test equipment.

I can’t share details, out of concern that some of what I saw could be construed as industry secrets they’d like to protect from competitors. Well, I could, but I’d like to be invited back, and brands are more likely to lift curtains if I am discreet about what I see and how much of it I understand.

But I can say this – I was not expecting the level of sophistication that I saw.

Some readers have argued in the past that they believe cordless power tool brands all order some off-the-shelf cells, slap them in a plastic box with a circuit board and call it a fancy battery pack that’s priced a lot higher than the sum of their parts.

Nope. They have ability to control and test the performance and capabilities of their battery packs, down to the finest details possible.

Milwaukee’s cordless battery engineers and product managers would only need a fraction of the floor space to run the equipment needed to verify their charging rates don’t diminish battery pack longevity.

Is it still possible that their faster chargers might affect cell longevity? Sure. But will it be measurable or perceivable to the end user? Batteries are consumable and charge capacity will be diminished regardless of charging rate. But, let’s say there is a slight but measurable different that becomes apparent or even compounded over time. Would all the cycles of faster charging have been worth it? For someone buying a faster charger, the answer is most likely “yes.”

And for the users that receive faster chargers in their combo kits, that’s usually because they’re being paired with higher capacity or next-gen High Output batteries that were designed and launched in tandem with or following the chargers.

One might argue that while smartphone batteries have evolved over the past few years, the Li-ion cells in Milwaukee battery packs have not, at least not the 18650-sized cells in most of their non-High Output batteries. That’s true, but keep in mind that it’s still all about controlling the heat and thermal dissipation.

The same designs that help to keep batteries cooler during discharge as they’re put to work will help keep them cooler during charging, and charger tech, sensors, and cooling can aid in this.

Heat is usually the biggest enemy to Li-ion battery cells. Control the charging rate, and you control the heat. I’d bet they worked to dial things in and with a large enough safety margin to ensure that the faster chargers can improve performance without sacrificing battery pack longevity.

Milwaukee Tool knows their stuff when it comes to cordless power tool batteries. If Milwaukee says their faster chargers won’t have negative impacts on battery life, I trust it’s accurate and true.

There’s also the absence of anyone here (or in other online communities and forums that I’ve seen) complaining about Rapid Chargers killing their M18 batteries. There are enough M18 users and enthusiast users that wouldn’t we have heard of any issues with battery longevity by now?

There are downsides to the faster chargers. I came across a battery or two that were neglected for some time and drained too far. The Rapid Charger dismissed them as defective and wouldn’t charge them due to the voltage being too long. But, the voltage sensor in the standard charger has a lower threshold and was able to refresh the batteries, bringing them back up to full capacity and regular use.

The charging rates, safety measures, thermal sensors – everything that goes into these battery packs and chargers are deliberate. Milwaukee knows how far their batteries can be pushed, and they fine-tuned their chargers and batteries accordingly.

Taking Milwaukee at their word (they’ve never given me reason not to) and the lack of of anecdotal complaints has me believing their stance on the Rapid or Super chargers not negatively affecting battery life. And that’s ignoring the level of attention I know they put into their battery pack development and testing, thanks to what I saw during NPS19.

Sure, we *could* verify this for ourselves, but lower-cost testing would involve years of daily A vs. B testing, and accelerated charge-discharge cycling would involve a sizable investment in test equipment, at the least. We don’t exactly have an industrial space where I can build an automated set-and-forget lab bench, let alone the capital needed for the necessary equipment.

I am all for experimentation and third party verification of facts, but I have visited the idea before and high-performing 18V-class battery packs are simply too powerful for the equipment I have available or can reasonably budget for.

It seems contrary to what has been true in the past, that faster charging rates won’t negatively affect battery life, but in the absence of users who have experienced otherwise, it seems fair to take Milwaukee’s claims at face value.

If anyone has ideas on how to test for this without an inordinate time commitment, or a 5-figure test bench, I’m open to ideas.