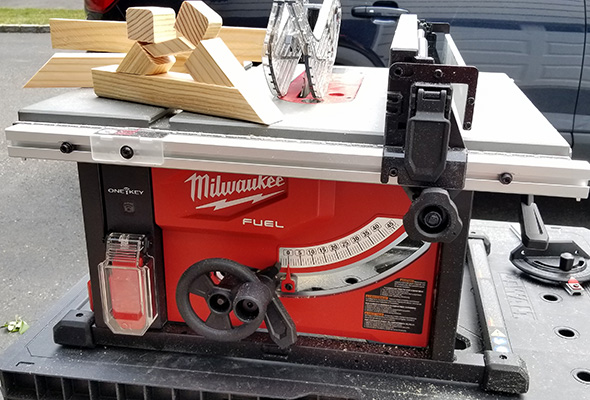 My heart skipped a beat when I took my kids to preschool this morning. There, on our front steps, an early morning delivery of a shiny new Milwaukee M18 cordless table saw.

As soon as I published a quick post this morning, I went out and unboxed the saw. The stand is still on the way, and so I secured it to a workstand (ideally it should be screwed or strongly clamped down), and started familiarizing myself with the features and accessory placements.

The M18 12Ah High Output battery pack was still charging, so I equipped it with a partially charged 5.0Ah battery that I had been using with the M18 7-1/4″ sliding miter saw.

The blade was perfectly aligned out of the box, although I did have to find a Torx key (which I also borrowed from the miter saw) to adjust the angle marker.

I’m still not sure where the blade guard docks when it’s not being used, but everything else was more or less easy to swap around.

The riving knife locking lever is on the underside of the left side of the saw, which isn’t quite as easy to toggle as if it were within the blade compartment, but the placement does mean that I don’t have to squeeze my hand into tight spaces.

I didn’t try the One-Key functionality yet.

It ripped 2x material quite easily, and crosscut it just as well. I wasn’t ready to push it through a lot of project work, but I liked what I saw so far. Early signs suggest that it’ll be every bit a capable portable table saw as Milwaukee claims.

The included 8-1/4″ framing blade cuts fast, and rough. I’ll have to think about what I will want to replace it with.

There’s a lot more I need to do before I can put together a formal review. But so far, I’m excited. And this was all based on how it performed with a 5.0Ah battery pack. I can’t wait to see what it can do when paired with the 12.0Ah pack that it was designed for.

Thank you to Milwaukee for providing the review sample unconditionally.