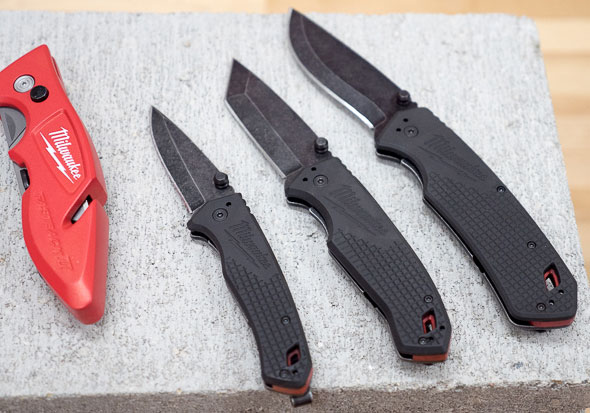 While one could consider a utility knife to be an EDC knife, such as Milwaukee’s FastBack series, EDC – or everyday carry – more often pertains to the type of pocket knife that one would carry with them wherever, even outside of the jobsite.

EDC is very loosely defined, but for Milwaukee it seems to pertain to a finer style of folding pocket knife.

Milwaukee previously came out with a line of FastBack pocket knives, and while they are quite handy, they’re not quite the types of knives one might take with them after work or on weekends. They’re more aptly to be used as heavy duty work knives. 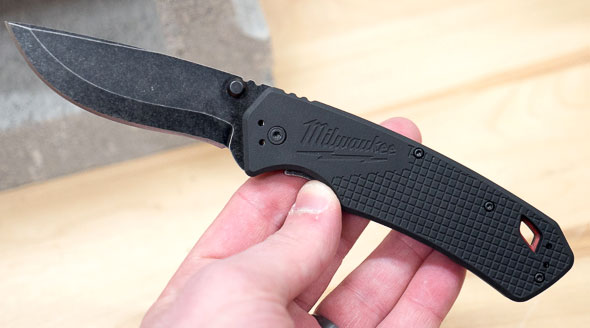 I caught a glimpse of the new Milwaukee EDC knives, and had to know more.

First, it looks like much more care is put into the shape of the blade, the grind, and the coating. The knife blades are made from D2 tool steel, which is strong, very tough, and wear resistance. It only offers some corrosion resistance, which is why you’ll see these knives with a black (DLC?) finish. 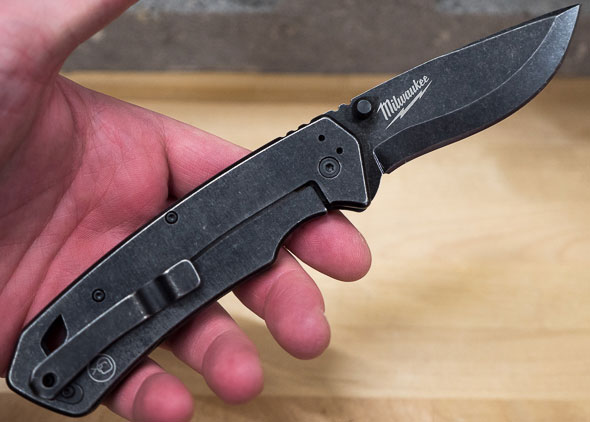 Although these are prototypes, I was very impressed with what I saw. They have deep-carry pocket clips, frame-lock locking mechanism, and a very solid feel. There’s not much shape to the handle, but for these knives I see that as a good thing.

Milwaukee designed the new series of EDC knives with assisted opening mechanisms. I didn’t like that you can only open them via the thumb stud, but these are only prototypes. I urged for a flipper opening design, and maybe it’ll be put on the roadmap.

The blade of the drop point knife has a subtle recurve, where there is a slightly concave outwards belly and then a convex inward section as you move towards the handle. This has somewhat of a Ken Onion influence to it, as with the Onion-designed CRKT Shenanigan Z, and CRKT Foresight, but I was told that Ken Onion as not involved with the designs.

Lots of knifemakers work a recurve into their knife blades, and so seeing a potential connection with Ken Onion was merely my wishful thinking.

In any case, I am very excited to see how the designs evolve over the next few months as they near production, and even more excited to see how well they perform. I hope that Milwaukee keeps the colors as they are – a black handle with red accent spacer works better than all-red knives. Then again, I have at least one red-handled knife in my EDC rotation.

I was told that pricing would be at the ~$80 mark. The Milwaukee product manager I spoke to made it clear that they’re aiming for the new EDC knives to be very competitive in what I know to be a highly saturated market. We’ll see if these knives, with their heavy duty D2 steel blades, meet those claims.

There will also be a new FastBack III, which improves upon the FastBack II utility knife by offering more internal blade storage – 1 in the blade, 4 in the handle.

I believe I spotted a new smaller FastBack knife as well, and also a camouflage-handled FastBack folding knife, but don’t have any photographs to show you – sorry about that.

ETA: March 2016 for the FastBack and EDC pocket knife expansion