ToolGuyd > Hand Tools > EDC, Pocket, & Multitools > Milwaukee FastBack Knife 2 for $15 Deal
If you buy something through our links, ToolGuyd might earn an affiliate commission. 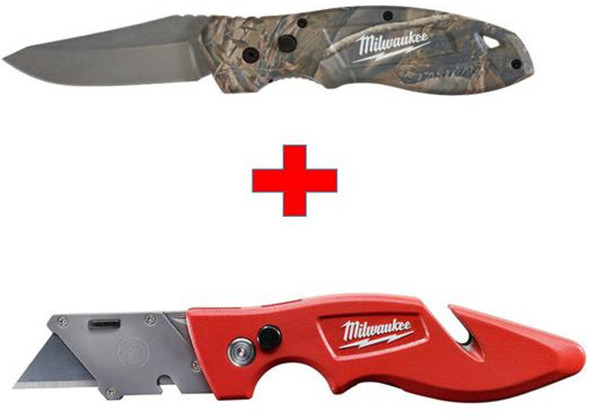 Over at Home Depot, there’s a new Milwaukee FastBack knife deal for the 2016 holiday shopping season.

You might have spotted this deal in my Home Depot holiday tool deals center haul post. I had bought it on the spot, because I had accidentally thought that the included FastBack was Milwaukee’s newest “III” model, which has greater built-in blade storage than the FastBack II.

I’m not too impressed with Milwaukee’s FastBack pocket knife, but it’s decent. Decently usable? Well, decent enough where I was willing to buy this bundle.

No, the FastBack folding pocket knife is nowhere near as good as Milwaukee’s new Hardline EDC knives, but it’s good enough for the money.

I wasn’t too broken up after realizing I was mistaken, and that the included FastBack is the basic no-blade-storage model.

Something Similar: Here is a decent no-frills Irwin folding knife, for $10

I suppose that retractable folding knives have their place, and I do have a few around here somewhere, but for regular use I prefer the one-step deployment of other knives.

Okay, so you get a great utility knife and a “beater” folding knife that won’t draw any tears if it chips, breaks, or is lost.

You probably won’t want to do any outdoors work with the camo-handled FastBack folder. Can you imagine if it fell into a leaf pile?!

This deal is identical to one from 2014’s holiday shopping season, and better than last year’s 2-pack FastBack deal, where the bundle was 2 of these FastBack utility knives for $15.

The deal sounded better when I thought I was getting the FastBack 3, and when I saw the $15 price tag for the folding knife on the shelf. Looking online, each retails for $10, although that’s for the red-handled version of each.

Would I buy it again? Absolutely. I might even pick up a second set.