ToolGuyd > Hand Tools > EDC, Pocket, & Multitools > New Milwaukee FastBack Knife and Multi-Tool (“5-in-1”)
If you buy something through our links, ToolGuyd might earn an affiliate commission. 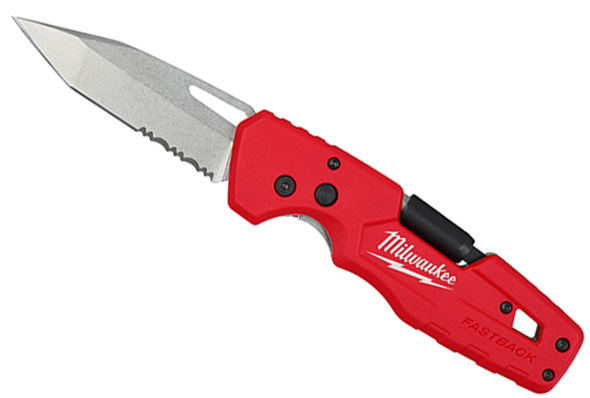 Milwaukee has come out with a new FastBack multi-tool, 48-22-1540, which they describe as a “5-in-1″ folding knife. It features a partially-serrated knife blade, 1/4” hex screwdriver bit holder, and a bottle opener.

We’ve seen knife-based multi-tools before, and Leatherman recently came out with their new Free multi-tools, but this is still an interesting addition to the Milwaukee FastBack lineup. 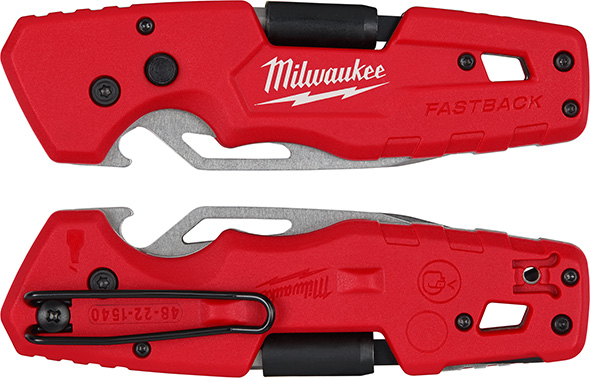 The new Milwaukee FastBack 5-in-1 folding knife has a similar form factor to their other knives. Here you can see the new style of pocket clip, which Milwaukee says is more durable and reduces pocket-tearing. It also has a lanyard hole for tethering. 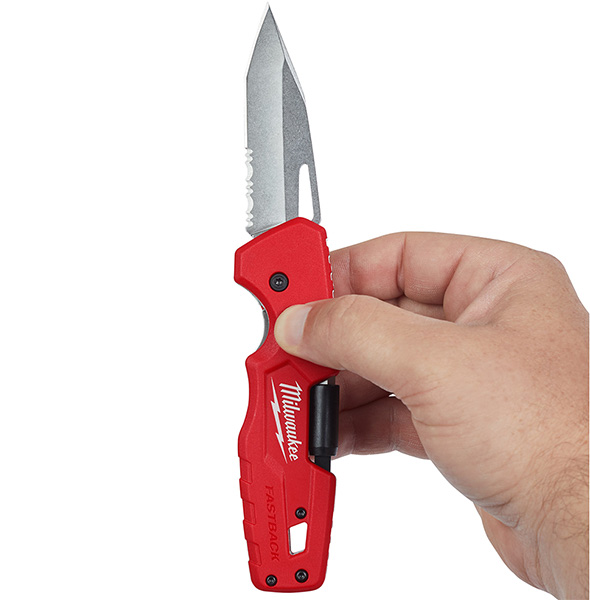 The 5-in-1 FastBack knife blade has a combination blade, meaning it’s plain or straight-edged towards the front, and serrated at the rear. It also has what looks to be a tanto-style profile, with sharp tip and pointed belly.

Basically, it’s a do-a-little-of-everything kind of blade, a safe choice for a utility-focused folding knife. 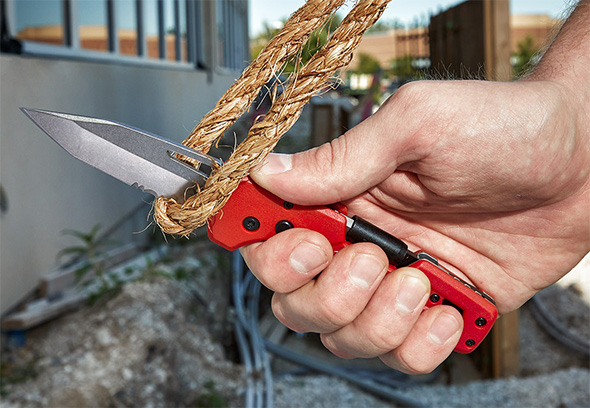 While many users prefer plain knife blade edges for easier sharpening, serrations are exceptionally well suited for cutting fibrous materials, such as rope. 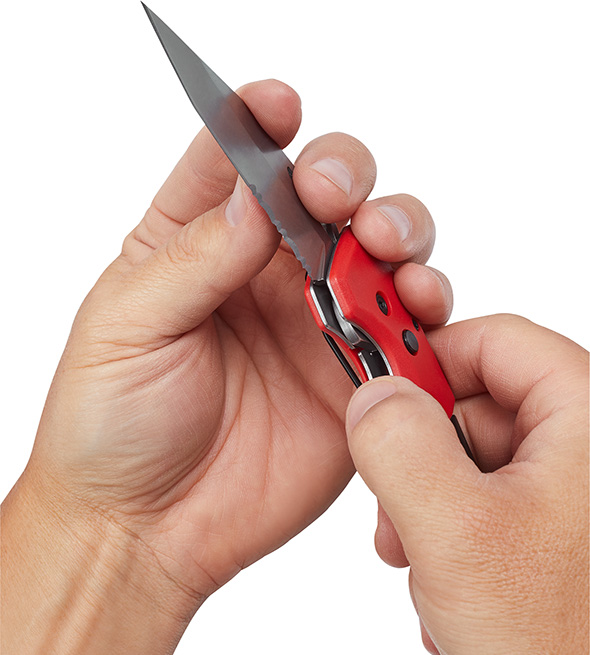 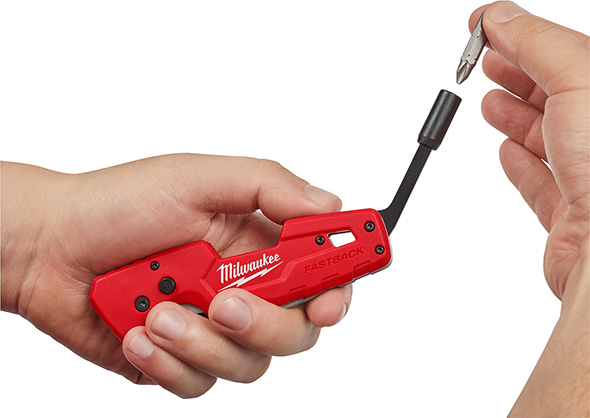 It comes equipped with a folding 1/4″ hex bit holder and a single reversible Phillips and slotted screwdriver bit.

We’re waiting to hear as to whether the screwdriver locks into position and the number of such positions. It would be convenient if you could use the screwdriver at multiple angles.

Update: The screwdriver locks open with a liner lock mechanism.

You could of course use the screwdriver in an inline direction. The closed knife doesn’t look like a very comfortable screwdriver handle, but pictures can be deceiving. 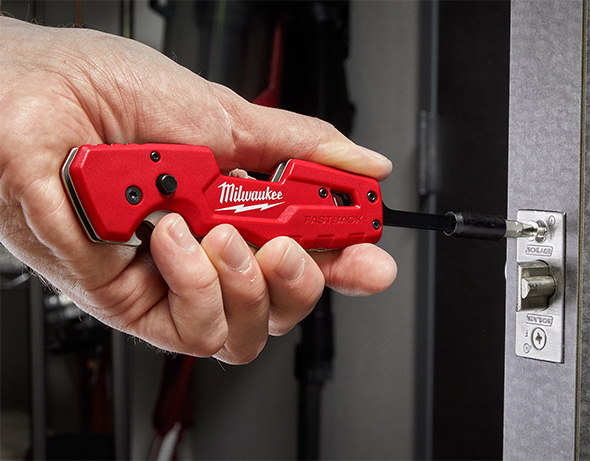 It looks like you can use the new FastBack multi-tool knife with standard 1/4″ hex insert screwdriver bits, greatly increasingly its versatility. It comes with a 2-in-1 reversible bit so that you can have 2 tip sizes/styles without having to dig around for loose bits. But, you can probably load it up with a single standard bit if you’re so inclined. 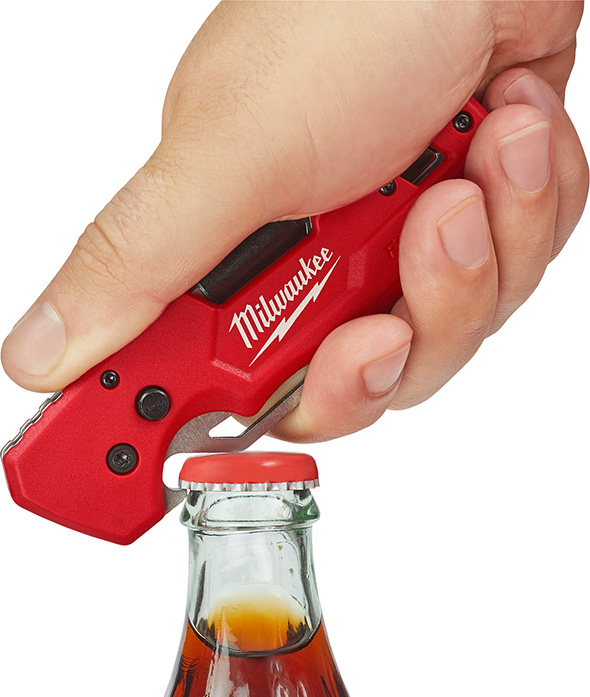 The back of the blade has a cutout that serves as a bottle opener.

Can we just call this a FastBack multi-tool? While technically it can be a 5-in-1 tool, I see it as having 3 tools and maybe 5  or 6 functions.

Maybe we can call it the Milwaukee FastBack 3-in-1 folding knife multi-tool? That way there’s the blade, the screwdriver bit holder, and the bottle opener. I personally wouldn’t include the screwdriver bit in the numbering, but most brands do and would.

Sorry, this is all nitpicking, but I rarely like x-in-1 marketing.

I kind of wish this was a utility knife instead of a folding knife, but I suppose then it would be thicker and possible lose the bottle opener. I could do without the bottle opener, and could possibly be okay with a thicker handle.

The blade looks like to have a good utility profile, although I personally don’t care for the tanto-style tip.

I’m more of a drop point knife blade kind of person, but I think I’d get a lot of use out of this knife if it were in my tool bag or garage. I wouldn’t consider it an EDC knife or multi-tool though, at least not by itself.

Although not for me, I think Milwaukee got the design right. What changes would I make to this tool? What might I do differently? I don’t know, and that’s usually a good indication that my hesitations are preferential. In other words, I don’t really like the way it looks, but for personal preferential reasons.

Maybe I will end up liking it. Look for a review here on ToolGuyd in a couple of months once it hits the market.

I wonder… might Milwaukee one day make a folding screwdriver? I mean, consider the Fastback multi-tool, but without the knife. It could have a couple of slots for insert bits, and the same folding bit holder. Maybe the screwdriver shaft could lock in place at 90° and inline. Am I the only one who would want a FastBack screwdriver like this?

If you’re looking for something different, Milwaukee came out with a folding lockback knife two years ago. Their other FastBack utility knives are being updated, and we’ll report more on them another time.