ToolGuyd > Power Tools > Cordless > First Impressions: New Milwaukee Heated Hoodie
If you buy something through our links, ToolGuyd might earn an affiliate commission. 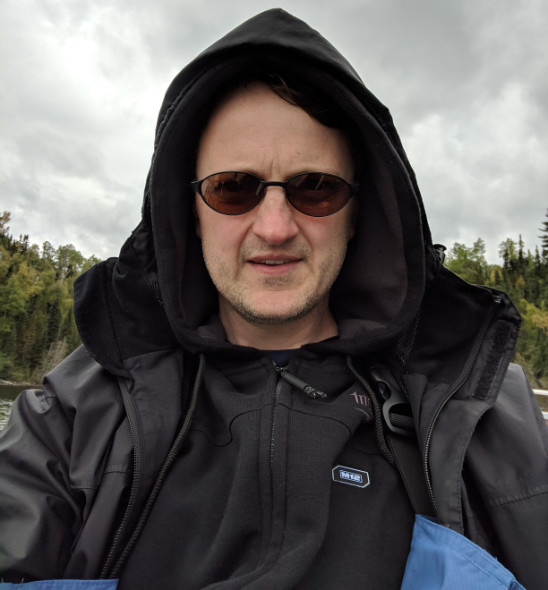 A month ago I had the opportunity to try out the new Milwaukee heated hoodie a little earlier than normal. My friend and I took a late September fishing trip in Northern Minnesota. It wasn’t exactly warm at home, but going up near the Canadian border only made it that much colder. It rained most of the trip and temps never got out of the high 40’s. Just about perfect weather for testing the hoodie.

Before I get into my experiences, let’s talk about the Milwaukee heated hoodie and the improvement they have made in this new generation. 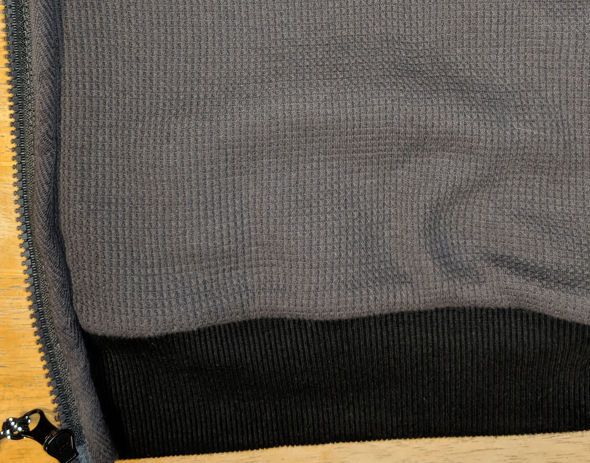 The heated hoodie has a “waffle weave” thermal lining, covered by a cotton polyester blend exterior. Inside the hoodie there are carbon fiber heating elements that heat your back and chest. The hoodie is machine washable — I washed the previous generation hoodie more than 20 times on the regular cycle with the rest of our clothes and dried it on medium heat. 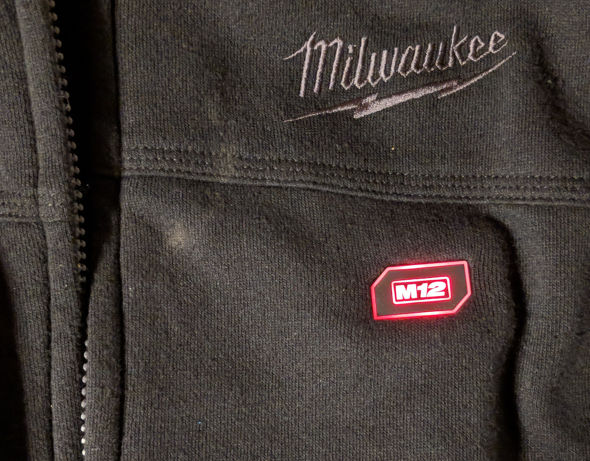 The heat is controlled by a rubbery switch on the left breast. You hold the switch for a few seconds to toggle the heating elements on and off. To cycle through the different heat settings, you press and release the button. The switch displays the current setting by showing three different colors: red is high, white is medium, and blue is low. 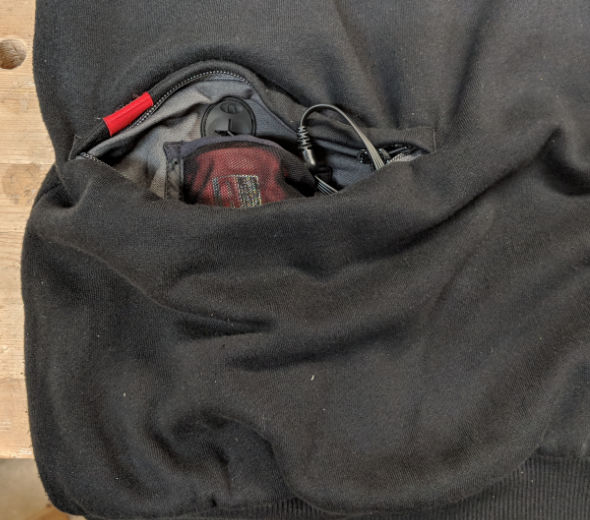 The battery and power source live in a pocket on the rear left side of the jacket. 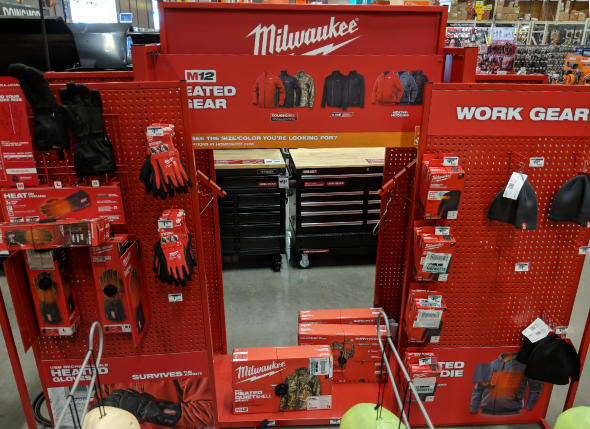 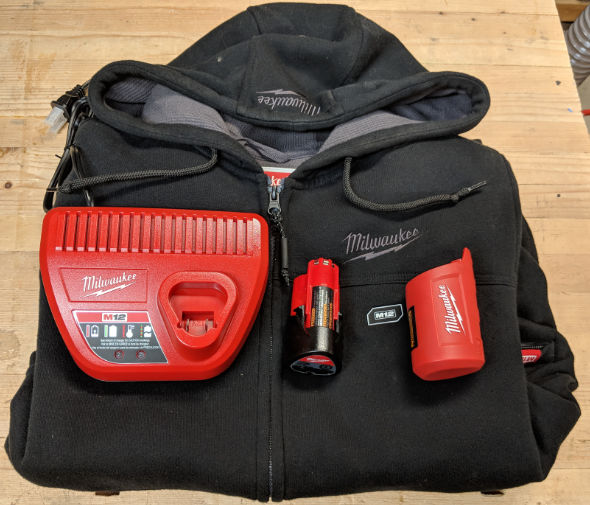 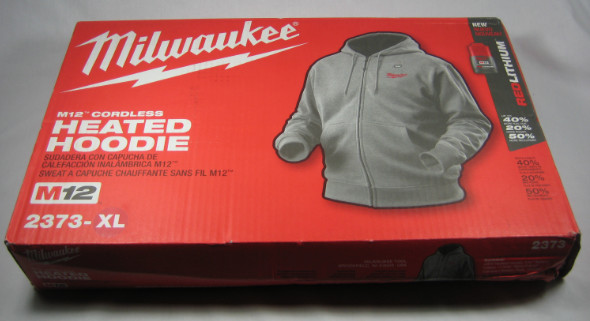 I’ve tested three different Milwaukee heated hoodies. My first experience taught me that sizing makes a huge difference in the performance. Back in January 2015, I was looking for a heated hoodie and the smallest one I could track down in my area was a grey XL one. At that point I was wearing somewhere between a medium and large.

I was really disappointed with the over-sized hoodie, as it didn’t seem to do anything extra to keep me warm. I could feel the jacket heat up if I touched it with my hand, but it really didn’t feel like it was keeping me any warmer with the heat turned on than without the heat, so I ended up returning it.

The next year, after attending NPS2016, Milwaukee sent me a red heated hoodie. When I asked about fit because of my previous experience, they told me to get the smallest size that would still fit. When I put on the new properly-sized hoodie and turned on the heat, I could actually feel it. After that I was hooked. I pretty much wore it whenever I could.

What I really liked about the hoodie was that it allowed me to dress lighter in cold weather than I otherwise would have been able to. I was so pleased about this that I posted on instagram after a wearing it under my jersey at a hockey game. I didn’t have to deal with a thick jacket at a sporting event and when I really needed the extra warmth when I got outside in the cold, I was able to power on the hoodie.

Stealth @milwaukeetool heated gear. The hoodie worked really well after the hockey game last night. Everybody was shivering while standing and waiting for the shuttle. I turned on my hoodie and was comfortable. I also found it was easier to see the light underneath while it was low (blue), I couldn't get a photo to show it clearly while it was on high (red) #toolsample #heatedhoodie #hockey #minnesotawild #winterweather

The hoodie is pretty warm on it’s own compared to other non-heated hoodies. There were times when I thought the heat was on because I was feeling warmer than I thought I should, but I’d check and find the heat wasn’t even on.

After wearing the red hoodie for 2 years, I was finally getting around to doing a review when I found out it was being discontinued. So following NPS 2018, I received another sample of the black heated hoodie with the “quick heat” function. This brings me to my recent camping experience.

The weather was cold and rainy, so during the day I was wearing the hoodie under my rain suit. Most of the time I wasn’t using the heating function, but when the wind would start blowing, I’d turn on the heat and it definitely felt like I was feeling the heat faster than the old hoodie. Once I felt warm, I’d turn down the heat to medium or low for a while until I got too warm.

Each day I was using a freshly charged 2.0Ah battery which never ran out of charge. It definitely seemed like the battery lasted longer on this hoodie than the previous one.

I have a “sub zero” mummy sleeping bag, but I swear they meant 0°C and not 0°F. It’s never been very warm when the weather gets cold. I was prepared this time and slept in the new hoodie every night. I was really thankful that I did too. After 1am or so in the morning I found myself switching the hoodie on to low to keep myself warm.

This worked out really well, it was just enough heat to keep me comfortable, but not enough that I was sweating. Come morning 7 hours later, the hoodie was still going strong, blue light still glowing — again I was using a 2.0Ah battery though, not the 1.5Ah included in the kit.

The last night we were there, temps dipped to freezing overnight and I found myself turning on the hoodie as soon as I got into the sleeping bag. I still woke up with a blue light shining, although I had purposely loaded in the 3Ah battery. 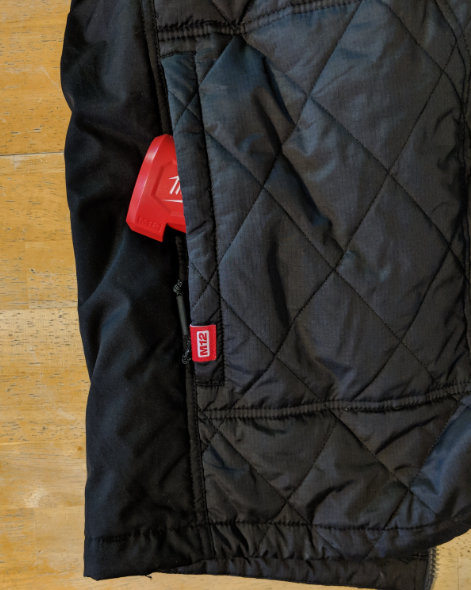 While the location of the battery doesn’t bother me that much the pocket is still oriented the wrong way. Newer Milwaukee heated jackets, like the Axis, have a vertically zipped pocket that is way easier to access than the horizontally zippered pocket on the heated hoodie. I’ve found changing the battery on the Axis jacket to be much less of a contortionist act while wearing the jacket. It’d be nice if they updated the hoodie with a vertically zipped pocket.

While I found that the new heated hoodie seemed to heat up faster than the older generation, I’m not really comfortable with that subjective comparison. I’ve been working on a way to objectively test the heating time of both generations of hoodie, but I’m waiting for a colder day to see if I can get more dramatic results. My tests so far do show a slight improvement, but not enough that I can rule out experimental error.

I’d also like to do some longevity testing, as it seemed the battery lasted longer in the new hoodie than the previous hoodie, but maybe the older hoodie has degraded with repeated washings and abuse.

I really like this hoodie, both with the heat on and without. Its construction and ability to retain heat are excellent. If I could go back a few years I’d tell myself to try and find a properly sized hoodie online rather than giving up after getting discouraged.

Thank you to Milwaukee Tools for providing these Heated Hoodie samples.