ToolGuyd > Power Tools > Power Tool Accessories > How Milwaukee Hole Saws are Made
If you buy something through our links, ToolGuyd might earn an affiliate commission. 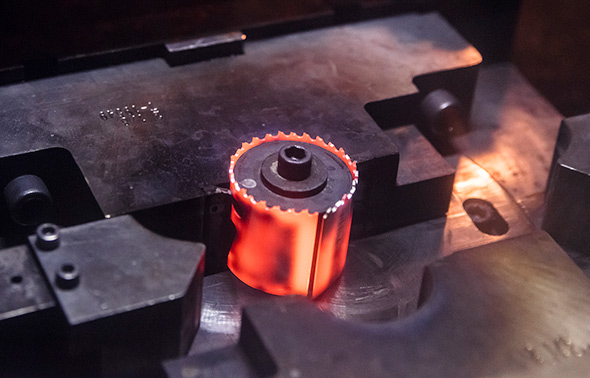 In the second installment of my Milwaukee USA factory tour, I talked about the differences between how bi-metal Sawzall blades and carbide-toothed Sawzall blades are made.

Here, in the last post of the series, we’re leaving Sawzall blades behind and I’m going to walk you through the process of how a Milwaukee Hole Dozer hole saw is made.

Milwaukee Hole Dozers are bi-metal hole saws, meaning that the teeth are made from a hardened metal that’s different from what the rest of the cup is made from.

Milwaukee says that the bi-metal hole saw is “the workhorse of the industry,” and is used by many different trades, and so it needs to be able to cut holes in clean wood, nail-embedded wood, and in different types of metal.

Milwaukee has two different lines for producing hole saws: an automated line capable of producing high volumes, and a “high flex line” for quickly responding to demand. Below, we’ll follow the journey of how a hole saw is made in high volume line, because that’s what we were allowed to see.

Have you ever wondered why hole saws are described as linear edge products alongside reciprocating saw blades? 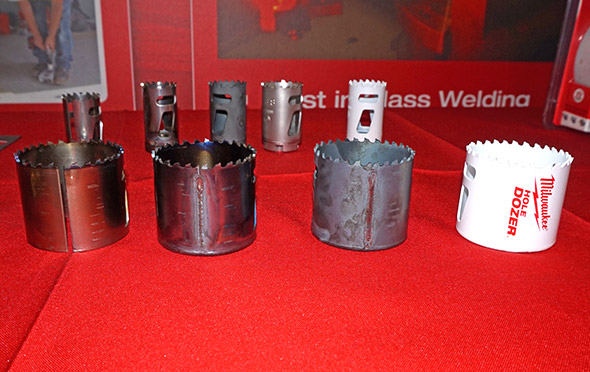 In this factory they make hole saws from 5/8″ to 6″ in diameter. Above, you can see some of the stages of making a hole saw: from hot forming the flat stock to a round blank, to welding the seam and the cap, tempering the hole saw, and painting/pad printing the branding.

Making a hole saw involves many of the same steps as making a Sawzall blade. The steps that are noticeably different are the hot forming and welding processes that turn a flat blade into the cup-shape that makes hole saws recognizable.

The hole saws start out as a coil of bi-metal flat stock with the “rip guard” teeth already formed. From the roll, the strip of metal goes into a straightener and then gets fed into their presses.

There are four different presses on the high volume line. One stamps the size markings onto the blank. Another cuts the slots for removing the plug. The last one cuts the strip into shorter lengths for bending into hole saws of the specified size. The fourth press isn’t used in production, it is used for prototyping — they gave us the example of testing new types of slots.

The blank gets heated red hot and then is fed into the hot forming machine. The hot blank gets dropped in place between the cylindrical center die and the rear concave die.

Stuart’s Note: I could watch this all day!

From the cooling tunnel, the round blank gets loaded into the welding station. It uses three robotic arms that work in concert to pull the round blank off the conveyor, weld the seam on the side, and weld the cap to the bottom.

Below you can see a closeup of one of the robotic arms placing a hole saw into a fixture to weld the seam. 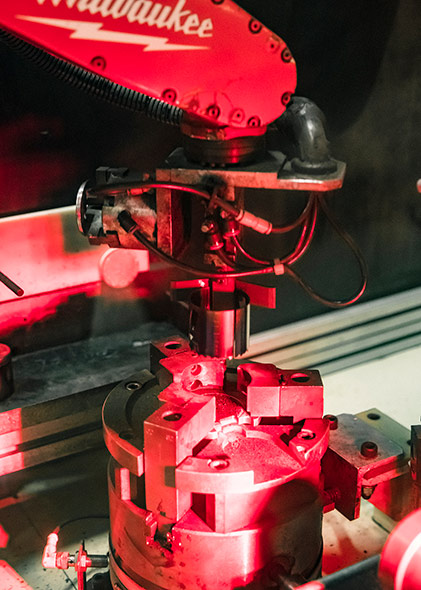 Next, we were taken through the room with the tempering ovens. This is where the hole saws would go after heat treating to be baked for several hours to get to their hardened state. We were not allowed to take any photos of the tempering process and were hustled to the painting/printing part of the line.

Milwaukee recently switched over their hole saw coating lines to a thermoset paint. Unlike the old paint, this new paint doesn’t gum up when the hole saw heats. This change in the type of paint results in faster cutting times and longer battery life.

You can see workers loading and unloading holes saws from the conveyor on the coating line. Once the hole saws go through the paint booth and oven, the hole saws are removed from the line and pad printed. In the background of the video you can see the carousel for the pad printer. They have two different pad sizes, one for larger hole saws and one for smaller hole saws.

Once the saws are printed they are inspected, and placed on a collection tray. 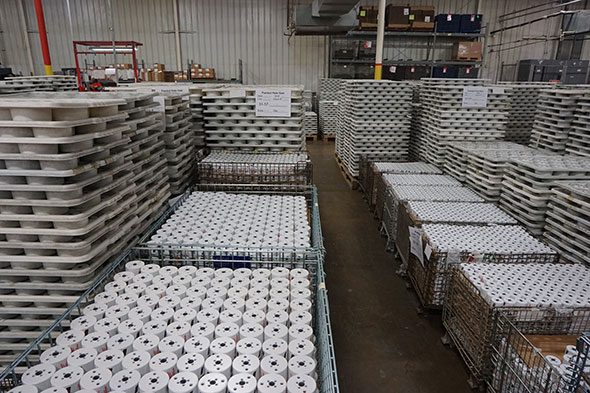 Earlier in the tour they showed us a staging area for hole saws that are ready to be packaged and shipped. They wait as long as they can to package them so they can respond to demand for the type of product they need to ship, whether it’s single cups in clamshell packaging with no arbor, packs of 2 shrink wrapped together, single cups with arbor, bulk boxes, or sets. 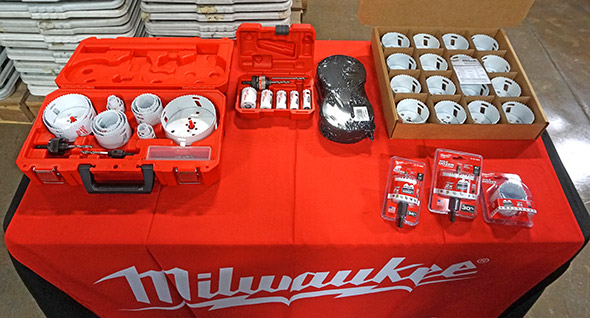 But Milwaukee has a lot more capacity at the Greenwood plant. All of the manufacturing we saw was in a single building. There is also a second building, where most of the space is walled off with controlled access. They didn’t even hint at what we would see if we went into that part of the factory, so we’ll just have to wait and guess.

I’d like to thank Milwaukee Tools for inviting me down to Mississippi to tour their plant. Having worked with manufacturing before, I know there’s always more to building products than most people realize, but I was still surprised at how much I learned. I’ll never be able to walk by a hole saw or reciprocating saw blade again without a new appreciation for the people and processes involved in making them.

Milwaukee USA Factory Tour: How a Typical Sawzall Blade is Made

How it’s Made (in the USA): Milwaukee Carbide-Toothed Sawzall AX Blade