ToolGuyd > Tool Science 101 > Milwaukee “Iron Carbide” Cutting Tools – What Does This Mean?
If you buy something through our links, ToolGuyd might earn an affiliate commission. 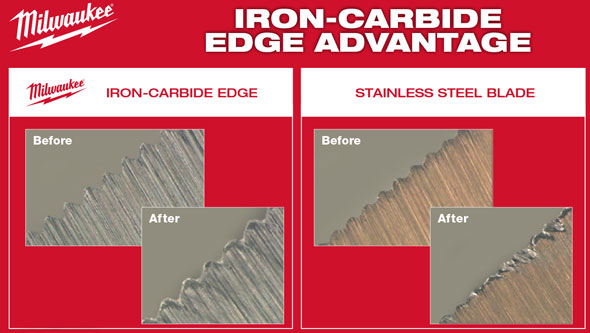 Milwaukee’s snap-off blade utility knives and new heavy duty scissors all have iron carbide cutting edges. My first instinct was to dismiss this as marketing fluff. Iron carbide sounds cool and fancy, but most users won’t know what to make of this. They might be impressed without even knowing what this means.

When you hear carbide, it’s mostly in regard to tungsten carbide cutting tools. Iron Carbide is, as you might have guessed, an alloy that consists of iron and carbon. You’ve heard of low- and high-carbon steel, right? Iron carbide typically has a much greater weight percentage of carbon than high-carbon steel.

I reached out to Milwaukee, asking if they had some high-magnification images to show the differences between iron carbide and regular steel or stainless steel cutting blades.

In the comparison image above, an iron carbide blade (left) and stainless steel blade (right) were used to cut through a tough and abusive material, such as a metal pallet banding strap. As you can see, the cutting edge on the iron carbide blade is a little worn, but still sharp. The edge of the stainless steel blade is heavily worn and dulled down.

When Milwaukee engineers designed their new scissors, they kept in mind that most pros were using scissors with stainless steel blades, and that stainless steel blades quickly dull when used to cut tough materials. No, jobsite scissors aren’t often meant for cutting things like metal pallet straps, but they’re used in such a manner anyway.

Milwaukee’s iron carbide-edged blades have harder cutting edges than stainless steel blades. This means that edge retention will be a lot longer, and that the scissors won’t dull as quickly or easily.

Since iron carbide is a very hard material, it’s also going to be more brittle, compared to stainless steel. I’ve been using a Milwaukee iron carbide-edged snap-off utility knife, but haven’t noticed any unusual chipping of the blades. I did notice that the blades do last longer than other brands’ blades.

To sum it up, an iron carbide cutting edge means such tools will stay sharper for longer. Yes, iron carbide is an attention-grabbing keyword, but it’s one that translates to real-world benefits.