ToolGuyd > Hand Tools > EDC, Pocket, & Multitools > New Milwaukee Lockback Knife
If you buy something through our links, ToolGuyd might earn an affiliate commission.

Milwaukee has come out with a new Lockback pocket knife, 48-22-1940, to meet the needs of users who prefer traditional manual folders.

The Hardlines are decent EDC knives, and the FastBack folding knives decent “who cares if I destroy it” beater knives.

The new lockback knife features a 3″ stainless steel blade, glass-filled nylon body, a formed wire pocket clip (which looks to be reversible), and a lanyard hole. 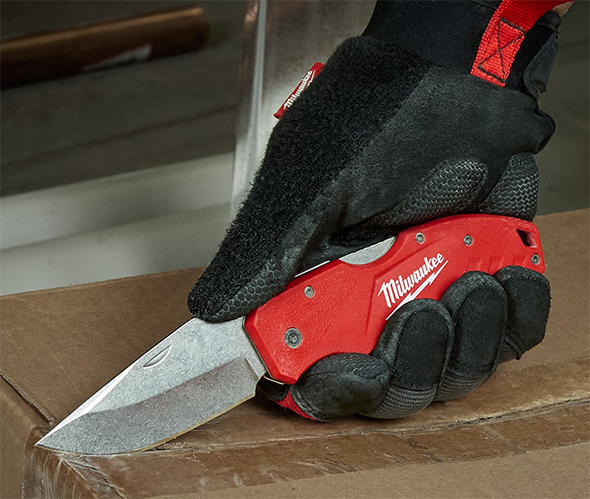 A liner lock knife can take some getting used to. I’ve given or showed some of my knives to friends or family members who have handed them back open, saying something like “I don’t know how to close it.” And it can also be hard to get a good grip on a liner to release the blade.

I find lockback knives to be inherently simpler to use.

Deployment is done via nail nick, which means two-handed opening. (You should always be aware of your local knife laws and regulations.)

I wonder if the absence of a thumb stud is to cut down on unneeded added costs, or to purposefully make this a slower-opening knife.

Does that mean it can be sold in NY and other areas? Home Depot says that they cannot ship the FastBack knife to AK,GU,HI,NY,PR,VI, presumably because of the button release and one-handed wrist-flick opening. They don’t the same about the Hardline.

I don’t like cheap knives. Well, most cheap knives. Some brands have been able to put together usable knives at lower prices. Others put together knives that look good, cost little, but perform terribly. And it’s not just the performance, but the user friendliness. A lot of cheap knives simply suck.

Milwaukee’s similarly priced FastBack folding knife, which you can buy for just $10 via HD? It’s okay. It’s usable, inoffensive, and not bad at all, meeting or even exceeding my expectations for what a $10 to $15 knife should be like. I expect the same from the new lockback knife, but maybe it’s even better, as Milwaukee product engineers had years of feedback to draw design inspiration from.

Thoughts? Are you in for one, or does the nail nick and lockback design not appeal to you?

In case you’re not too familiar with lockback knives, scroll back up and look at the photo. Do you see that grey part that’s exposed in the handle cutout at the spine? Push that to release the lock, and then pivot the blade back towards the handle to close the knife.