ToolGuyd > Power Tools > Cordless > Hot Deal: Milwaukee M12 Cordless Drill and Impact Driver Kit, Plus Bonus Battery, for $99
If you buy something through our links, ToolGuyd might earn an affiliate commission. 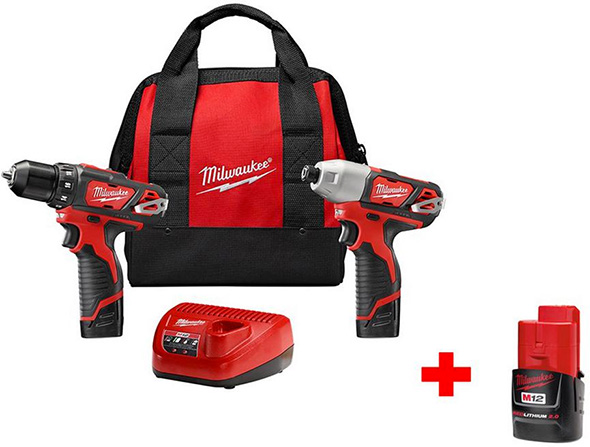 Over at Home Depot, there’s a Father’s Day deal that simply screams “BUY ME!” This Milwaukee M12 cordless drill/driver and impact driver combo kit is a good buy when it goes on sale for $99. But throw in another battery? It’s hard to pass up.

This is the kind of deal that interrupts my breakfast and leads me to ask whether anyone I know could use a compact cordless drill and impact driver kit. Can I use a kit like this? I can’t just not take advantage of it, right?

There’s no telling when the deal expires, or whether supplies are limited, but it’s an online-only promo as part of Home Depot’s Father’s Day promos.

Note: Last year’s promo included a 6.0Ah XC battery as the free bonus. Meaning, this deal could be a teeny bit better, but this is a fantastic deal nonetheless. I mention last year’s deal for historical purposes. Last year’s deal also sold out very quickly once it became publicly known.