ToolGuyd > Power Tools > Cordless > Milwaukee M12 Cordless Inflator Review
If you buy something through our links, ToolGuyd might earn an affiliate commission. 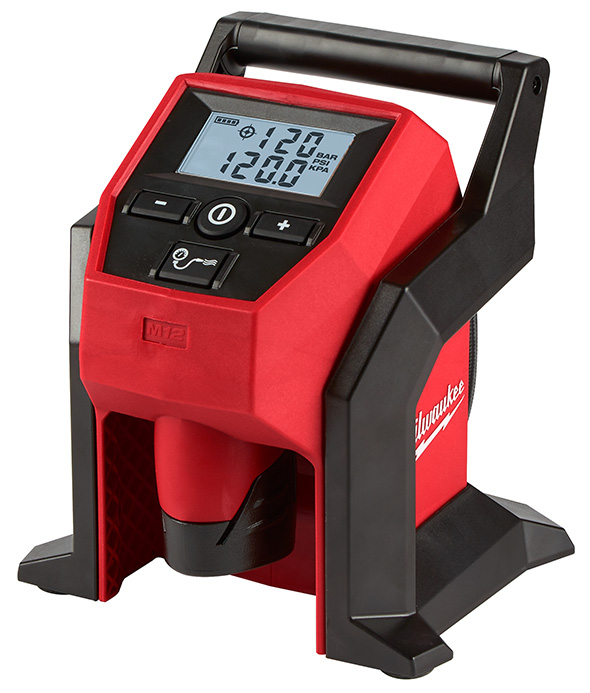 Back in March, Stuart first wrote about Milwaukee’s new M12 inflator and, not long after, he offered a follow-up in which he offered some thoughts on why Milwaukee introduced the inflator to its M12 platform instead of the more powerful M18 line.

I’ve had the inflator for about two months now, and absolutely love it. In fact, I probably use it more often than any other tool in my workshop, though I wish I didn’t need to.

Until recently, I had two vehicles — a 1999 F150 and 2002 Ford Focus — and both had some major tire issues. The truck had a number of problems, but a slow leak in the front driver’s side tire required daily attention until I was able to get it fixed.

Because of incidents like that, I travel with an inflator at all times. I used to rely on a Husky 120V corded model, which I used at my old place with a heavy-duty, all-weather extension cord I ran from my back door, across a giant patio and down two stories to my parking spot. It worked great for the car, but when I was traveling, it was hard to find power if I couldn’t find a gas station.

When I added a small Stanley two-gallon air compressor to my workshop, that became the tool of choice for my truck tires and I added Ryobi’s 18V inflator when I purchased my Ryobi garden and lawn tool set. The Ryobi did a fine job, but was worthless with the truck and now starts rattling violently when I get it over 20 PSI.

So, when I saw the Milwaukee inflator sitting all by itself on a promo stack at Home Depot — and bundled with a 2.0Ah battery — I figured I’d take a chance. At the very least, I figured, I’d have another battery for my growing collection of Milwaukee heated gear. 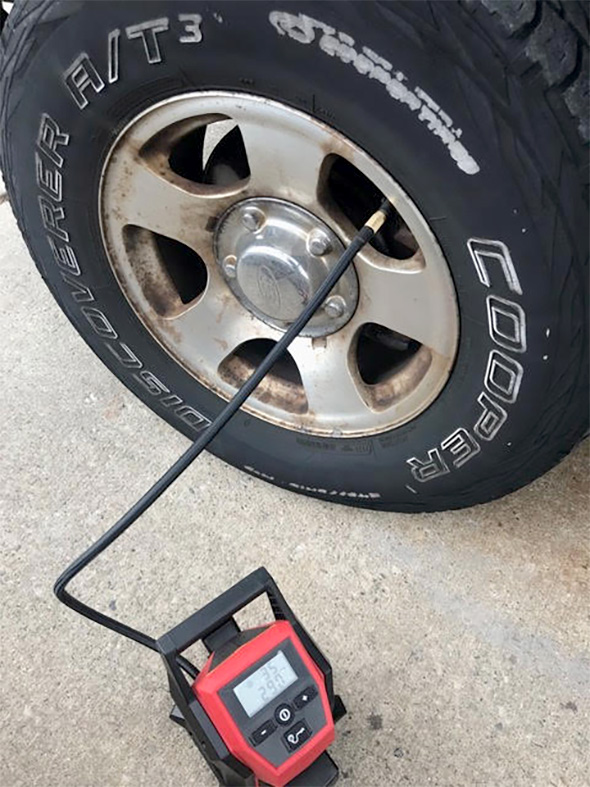 As luck would have it, my truck tire was flat again. About 21 PSI. I had planned to stop at my favorite gas station to fill it up, but with the inflator in my cart, I popped it out and filled it up right there in the lot. The battery was only partially charged — a little over a half — but in a little under three minutes, my tire was back to 35 and I was on my way home.

I fully charged the battery, and checked the tires on my car the next day. One was at 16 PSI and the other at 22. Again, I hooked up the inflator and filled them both up in no time.

But the battery drained quickly. I had about 1/4 charge capacity left after filling the two tires. So, remembering my neighbors across the alley have had a car sitting in their driveway essentially on its rims for the last year, I grabbed a fully-charged 4.0 and got to work. All four tires filled from flat to 35 PSI with plenty of battery to spare. For good measure, I drained air from my front truck tires to about 25 PSi and filled them up again.

No issues, no drop out, no stalling, no rattling.

It’s a winner in my book, and I’ll be adding a second one soon so I can keep an inflator in each vehicle.

Stuart covered most of the nuts-and-bolts in his earlier post, so here are just a few more quick thoughts from my own observation and use:

The display is pretty basic. You press the power button and it shows the current PSI and the target PSI. You use the easy-to-read plus and minus buttons to set the target, press the inflate button and that’s it. The inflator runs until it hits the target. No more, no less.

There’s really nothing notable here. It’s small and compact, and really, it’s kind of a miniature version of the M18 radio (without the bottle opener, though…).

If I have one complaint, and I use the term loosely, it’s the lack of a corded option, or at the very least, a DC option for the vehicle. It would be a nice touch and add an extra level of functionality but in no way is it a deal-breaker.

I’ve seen a number of them on display stacks at the Home Depot stores in my area, still priced at $79 with a battery (but again, no charger).

A Note About Leaks

If you step inside a store and come out to find a flat tire, you’re probably going to need to swap the tire for a spare, or use the emergency patch kit that some cars come with in lieu of a spare. Slow leaks might not require the same immediate attention, but should still be fixed as soon as possible.

If you only drive locally and notice a 5 PSI loss over 3 days, for example, you *might* be able to wait until the weekend. But if you fill up a tire and it’s flat again in minutes, don’t drive on the tire. Each situation is different.