ToolGuyd > Power Tools > Cordless > Milwaukee M12 Cordless Rivet Tool
If you buy something through our links, ToolGuyd might earn an affiliate commission. 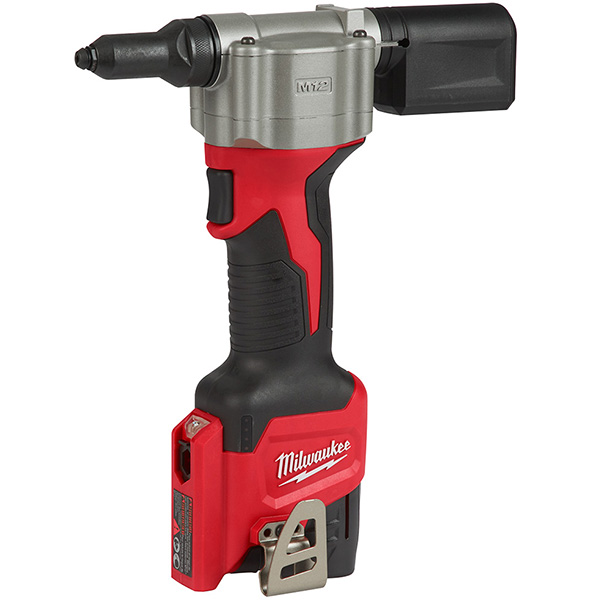 Milwaukee says that their M12 rivet tool is an industry first, for using a scotch yoke mechanism instead of a ball and screw mechanism featured in other rivet tools. They say that this allows for the tool to deliver a lot of force in a more compact and shorter package.

They provided a handy chart that shows off more of the M12 rivet tool’s advantages: 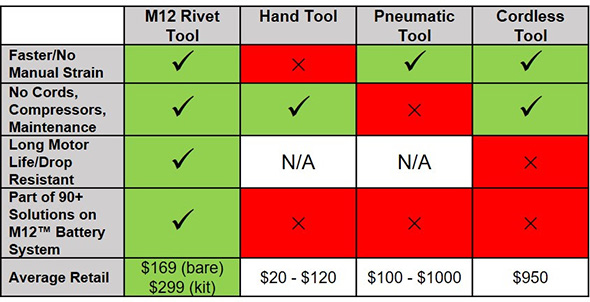 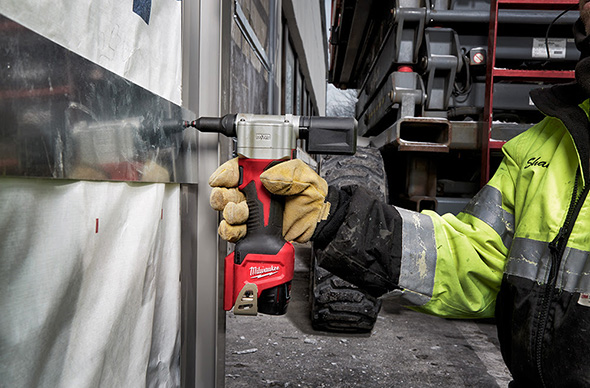 Here’s an application image, to get a sense of the tool’s size. 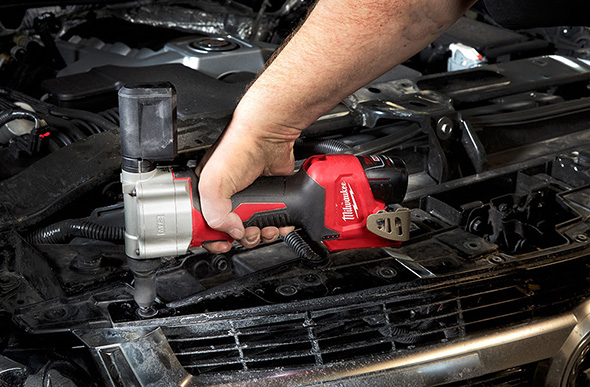 Another product photo shows the rivet tool being used in an automotive application.

The kit will come with (2) M12 battery packs, a charger, belt hook, contractor bag, and the 3 nose pieces.

$169 for the bare tool? That’s significantly less expensive than other cordless tools on the market. I’d never considered air tools because I don’t work in a production environment and end up in settings where there’s no access to an air line.

Using a hand tool to pop 1/8″ aluminum rivets is one thing. But 3/16″ stainless steel rivets? My pop rivet tools would likely requite a few grunts and groans. They make heavier duty hand rivet tools that require less effort, but they’re large – too large for many types of applications.

I have a project in the works that this might be perfect for. 1/8″ rivets are too small, and I didn’t think stepping up to larger sizes would be easy on my hands, given how many fasteners or rivets it will require. I tend to love using button head and socket cap screws, but there would be too many holes to thread. Self-threading sheet metal screws? Maybe. Machine screws with nuts? That was the current plan, but I think that the M12 tool could quicker work, and with easier effort, not to mention lower fastener costs.

I won’t throw away my rivet tools anytime soon. While this one is pretty compact, especially compared to other products currently on the market, there might be times when the smaller size of a hand tool could be advantageous.

Overall, the Milwaukee M12 cordless rivet tool looks to be a very welcome surprise to their compact tool lineup.

Their new M12 stapler was one of my favorite new tools from their NPS17 media event. It was a nice example of what Milwaukee has been working towards – M18 tools that provide corded tool performance, and M12 tools that take the place of hand tools, for quicker or easier work. Some tools are outside of this, with some M12 tools being lighter and more compact cordless power tools compared to M18 versions, such as their rotary hammer and band saw.

I never would have guessed that Milwaukee would come out with a compact cordless rivet tool.

While I use my pop rivet tools regularly – an Arrow pivoting-head tool (~$26 at Amazon), and a Stanley Pro – it’s mainly for custom fabrications or repairs. I didn’t think this was a construction or professional trade type of tool.

Where have you used pop rivets before? Would you buy a tool like this?