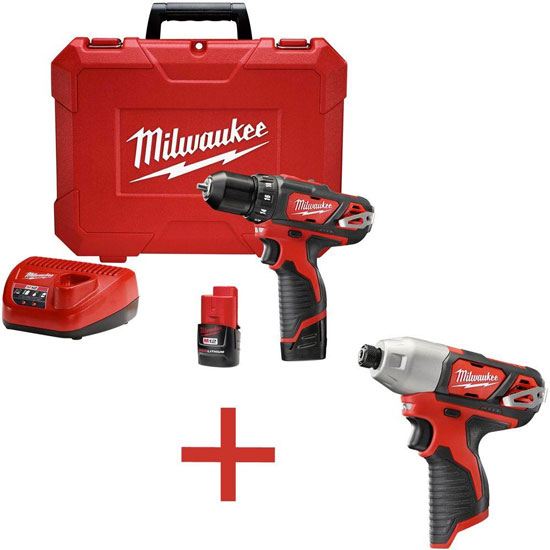 Milwaukee’s free tape measure and bonus tool promo is still ongoing at Home Depot, but there are also a bunch of separate promo deals worth highlighting.

We have already said that Milwaukee’s updated M12 2407 drill/driver is a great bargain at $99 for the 2-battery kit, and gave it value runner up standing in our 2014 best cordless drill recommendations. That kit is still a great bargain, but now Home Depot is running a special promo where you can get the drill, 2 batteries, AND their refreshed impact driver for the same $99 price.

There are a couple of other bonus combo options as well, all of them also priced at $99. If you have been looking for a non-brushless 12V-class drill/driver or entry into Milwaukee’s M12 lineup, these deals are worthy of close consideration.

This is such a good deal that I find myself tempted to order a combo for personal use. If it comes to that, I would flip a coin between getting the drill and impact bonus combo, or the drill and hackzall bundle.

Thanks to Matt for the heads-up! Matt actually wrote in about a Bosch 12V clearance deal at Menards stores, but something he said prompted me to see what kind of promo Home Depot was running on the M12 drill and impact combo.

Update: Matt’s tip was about the drill, impact, radio, and L-Boxx deal which is $132.61 at Menards (after mail-in rebate). It’s a clearance item and only available in-stores. There’s also a 2-tool combo for $112.14 (after mail-in rebate). The lowest I saw the 3-tool and 2X L-Boxx combo kit for was $160 during the 2013 winter holidays. $160 was great, $133 is even better. But since these are in-store-only clearance items at Menards, which is not a nationwide retailer, I couldn’t really justify a deal post.