ToolGuyd > Power Tools > Cordless > Milwaukee M12 Fuel Brushless Drills and Drivers
If you buy something through our links, ToolGuyd might earn an affiliate commission. 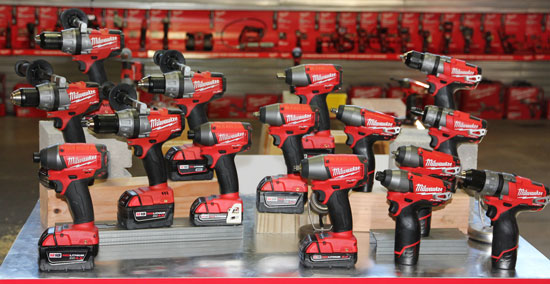 A couple of months ago Milwaukee kicked off the brushless tool race with their new generation of M18 Fuel tools. The initial line included a heavy duty drill and hammer drill, was recently expanded with an impact driver and impact wrenches.

Milwaukee is again expanding their Fuel lineup of brushless tools, this time right into their M12 lineup. While we predicted that Milwaukee would be the first to come out with brushless 12-volt drills and drivers, we had not anticipated that it would be so soon.

At a recent new product media event, Milwaukee engineers touted how the the new M12 Fuel drills and drivers were so much more powerful and longer-running that current and competing models. What they didn’t – and should have – emphasized was how much better the new tools feel in-hand.

Due to the M12 battery packs’ form factors, current M12 drills and drivers have somewhat bulky handles. There’s also the fact that most if not all of the current drill/drivers are first-generation 12-volt tools.

It seems that Milwaukee engineers worked diligently to redesign and optimize the M12 handles and drill/driver geometries. While not quite as svelte as Dewalt’s 12V handles, the new M12 Fuel handles feel far more comfortable than prior M12 pistol-grip tools. It’s wondrous how a few angular tweaks here and there can make a difference. 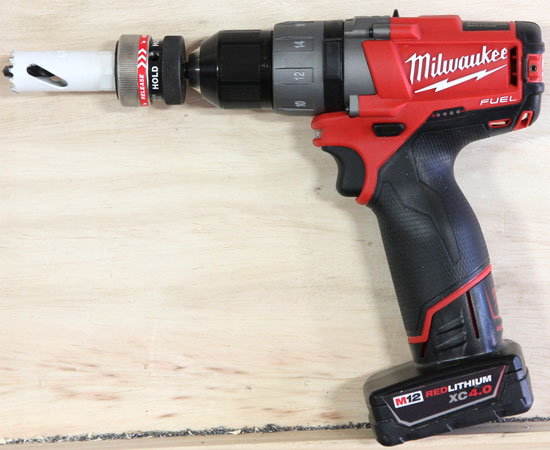 The new drill/driver strongly resembles the 2410 model, which is not too surprising. It is slightly more compact and tightened-up, but not drastically so.

Milwaukee’s M12 hammer drill is only 2-years old, but since they’re already upgrading the drill/driver, why not come out with a new brushless hammer drill/driver as well. Not that the brushed hammer drill could use any more power, but extra runtime is always appreciated. For heavier-duty usage Milwaukee’s new 12-volt rotary hammer will probably be more effective and comfortable to use. 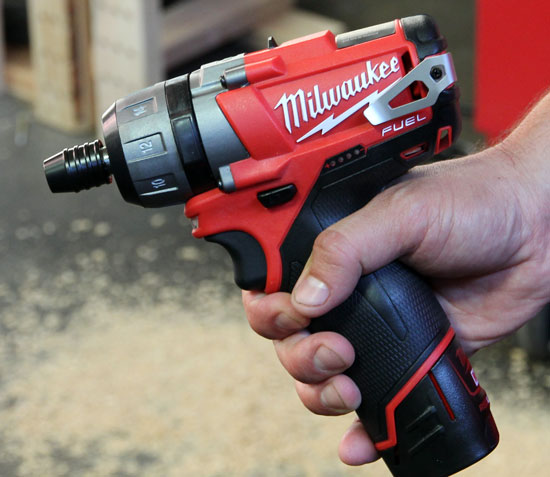 It’s about time! Milwaukee’s brushed screwdriver is very well liked, but its design and specs are dated. Heavier users will probably strongly consider upgrading to the new more compact design. 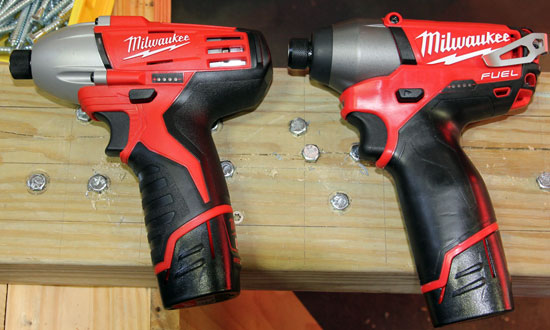 Since only a prototype was on-hand, we’re not sure what the final impact driver will look like. But as-is, the new impact was very comfortable to hold and powerful to use. A shift in gearbox and anvil design means that the new Fuel 12-volt brushless model is more compact and low-profile than the original brushed driver. 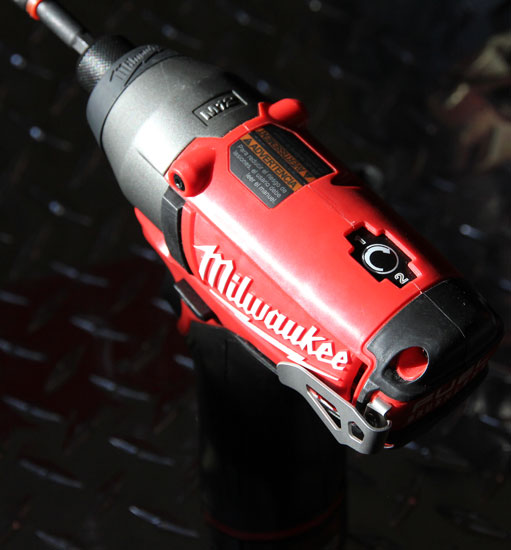 At the top of the tool is a new electronic speed and torque-control switch.

There were so many new Fuel drill/drivers to check out that we didn’t even peek at the 1/4″ and 3/8″ impacts. Even so, automotive users especially will be glad to see that Milwaukee will include impact wrenches with the initial M12 Fuel launch.

Official specs for the new M12 brushless tools have not yet been released, but we know that Milwaukee intends to power them with new RedLithium 2.0Ah battery packs. These packs are said to offer up to 2X more runtime, 20% more speed, and 20% more torque. They can endure twice the number of recharges and have been designed to operate below 0°F (-18°C).

As of now, the new M12 Fuel drills and drivers are due out this winter.

It was difficult to get a good feel for the tools in the 5-minutes we had to demo them at the media event, but they felt very well balanced. Compared to the brushed-motor M12 tools, the motor and gearbox assembly are shifted slightly more rearward.

We will need to test the new drills and drivers first-hand on our own terms to be sure that the tools are as comfortable as we initially felt, but we doubt our final impression will be too different from our first.

The new M12 brushless drills and impact drivers will definitely be worthy upgrades based on their improved ergonomics and Milwaukee’s runtime claims. They are also expected to be more powerful than the current-generation of 12V drills and drivers as well, making them quite future-proof.

We don’t know what other brands are planning, but suspect that they are working on next-generation high capacity batteries of their own. Will Bosch, Dewalt, or Makita release 12V brushless drills and drivers of their own? Possibly, but we’re guessing that they’re at least 6-months to a year or more behind Milwaukee, meaning a mid-to-late 2013 launch at the earliest.

(Please note that all of the M12 Fuel tools shown above are pre-production prototypes. The final versions might have subtly different textures and appearances.)