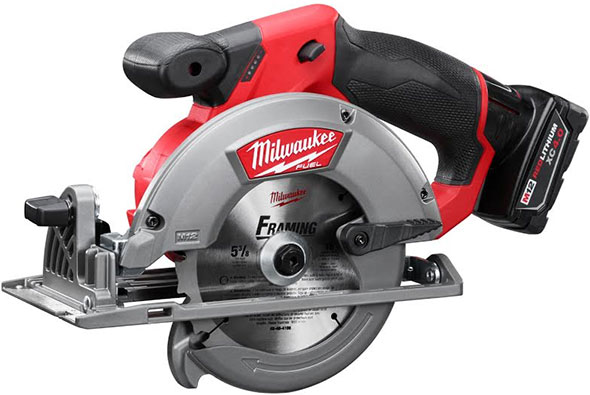 Well, you’ve asked for it, and Milwaukee made it happen. They have officially announced their new M12 Fuel 5-3/8″ circular saw.

Milwaukee softly previewed the new M12 saw a couple of months ago, and we mentioned it as part of our 2014-2015 new Milwaukee tool preview. But now that the saw is nearly ready to launch, full features and specifications have been released.

Milwaukee is not shy about their claims for this saw. It’s a Fuel model, and so it’s built with a brushless motor for high performance and runtime. In fact, Milwaukee says that it rivals 18V tools on the market today. 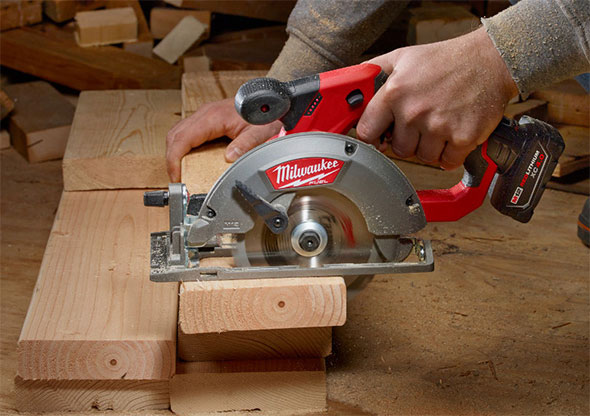 The M12 Fuel circular saw has a cutting capacity of 1-5/8″, which means it can cut 2x dimensional lumber. Milwaukee says it can complete 170 cuts in 2×4 boards per battery charge, presumably with an XC 4.0Ah pack.

It is built with an all-aluminum shoe and aluminum blade guards. There is also a built-in battery fuel gauge.

The new circular saw was engineered to deliver powerful cutting capacity and is capable of cutting most frequently used jobsite materials, from sheet goods to 2x dimensional lumber.

In the past it has been hinted that a 12V circular saw would be somewhat underpowered, which is why many brands haven’t even dreamt of releasing one. Makita and Bosch (internationally) both offer small 12V 3-3/8″ trim saws, but none are capable of working through thicker construction materials. 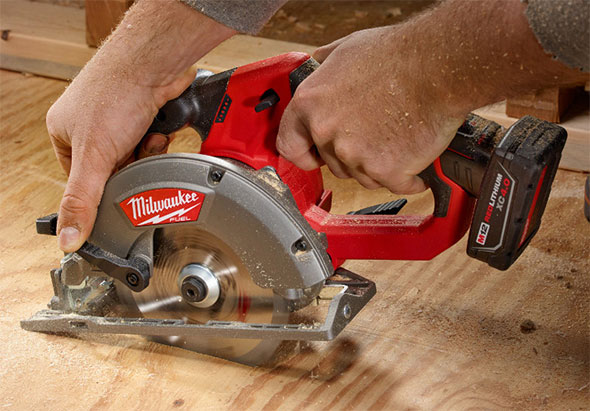 The M12 FUEL 5-3/8″ Circular Saw provides performance and run time that is comparable to a much larger tool, at a fraction of the size and weight.

These claims are along the same lines of what they’ve said about some of their other high performance M12 tools. Tools such as Milwaukee’s M12 rotary hammer, and their M12 band saw do offer great performance in a smaller form factor, and can often handle a majority of the tasks one might use an 18V tool for.

Milwaukee’s moves aren’t at all surprising. In their M18 lineup, recent tools such as their M18 Fuel brushless circular saw, which features a full 7-1/4″ blade size, are described as delivering corded-like performance. The same has been said about their recent M18 Fuel band saw.

Milwaukee’s M12 tools are positioned as compact cordless tools for lighter or specialty applications, and their M12 Fuel brushless tools are higher performing tools that can tackle some if not many of the tasks non-brushless M18 and 18V tools are typically used for.

Although the M12 circular saw, with its 5-3/8″ blade size, doesn’t quite reach the capacity of 6-1/2″ 18V saws, it offers enough capacity to cut through dimensional lumber, which is a big thing.

It would definitely be understanding if some users abandoned their 18V circular saws in favor of this M12 model, at least for many applications that involve sheet goods or dimensional lumber.

The pricing is a little steep – $149 for the bare saw, $229 for the 1-battery kit, but this isn’t unexpected for such a premium M12 Fuel brushless tool. I would like to see a non-brushless tool at a lower price point, but there are reasons why Milwaukee hasn’t come out with one before now.

I think that this saw will become quite popular, and if so it will be easy to see why. The ability to efficiently cut through dimensional lumber and sheet goods with a smaller and lighter tool – who wouldn’t want that?