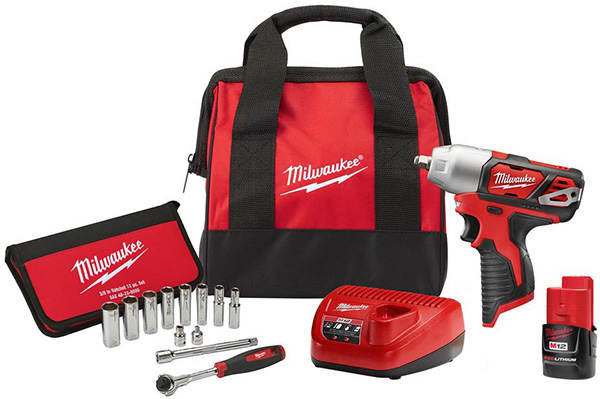 Over at Home Depot, a 2017 Milwaukee M12 special buy has returned, or at least this is the first time we’ve seen this deal since around Black Friday 2017. For $99, you get an M12 cordless 3/8″ impact wrench kit, plus a 3/8″ drive ratchet and metric socket set.

While the M12 cordless impact wrench doesn’t have a brushless motor, it can still deliver up to 1200 in-lbs (100 ft lbs) of max torque, which should be enough for the type of tasks you might want a compact impact for.

The bundle also comes with Milwaukee’s swivel-head ratchet and metric deep socket set. Ben discusses and shows off Milwaukee’s socket set in more detail here. Milwaukee’s mechanics hand tools are pretty decent, and although this is a small set, it gives you a good balance between drive tools and sockets. The socket set is typically priced at $69 by itself.

It’s a good deal for the price.

Thank you Tom for the heads-up!

If you want something with a brushless motor and a little more power, consider this deal featuring Dewalt’s 12V Max brushless impact wrench.

Also, please note that the sockets in the set are not impact-rated, and as such we don’t believe they’re intended to be used with the impact wrench.

According to my 2017 deal post, this special buy was actually a “deal of the day.” Right now, this Milwaukee M12 impact wrench and socket set bundle is a special buy, and not a deal of the day, but there’s no indication as to when it might expire or if supplies are limited (they probably are). If you’re on the fence about the deal you probably have some time to think it over, but you might not want to take too long.