Milwaukee is constantly expanding their M12 lithium-ion compact cordless tool lineup, and their new M12 3/8″ right angle drill is one of the most anticipated of the new offerings. While demand for the tool won’t compare to that of their pistol-grip driver, this right-angle driver will definitely find its way into many homes and jobsites.

We were very interested in this drill when we first found out about it, and with much excitement we received one for review.  This hands-on review focuses on the tool’s features, handling, and overall design. We will continue to push the tool to its limits for an upcoming follow-up review, which will focus more on the tool’s real-world use.

You can read on, or skip ahead to the summary.

A right angle drill is one of those tools that many DIYers and professionals do not realize they need until they NEED it. With long bodies and short chucks, right angle drills can be used in work areas too narrow or out of reach for conventional pistol-grip drills and drivers. Milwaukee’s new offering is no exception, with a very short head height of 3 3/4″.

To start, the drill is slightly heavier than we had expected. This is not a bad thing, just an observation. The size of the drill is as we expected, but it is far easier to grasp than had been anticipated. With its textured and soft rubbery grip, the drill feels quite comfortable in our hands. All switches, moving parts, and features have a feel and build quality that all professional tools should have. 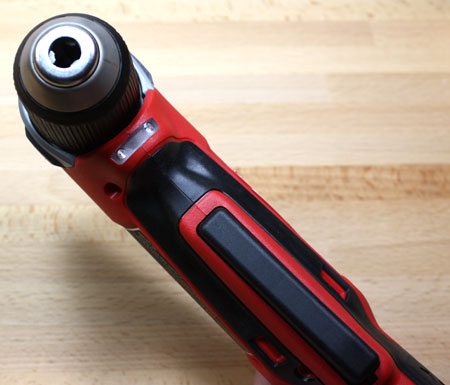 Featuring a 3/8″ chuck, the drill/driver can securely grasp both drill bits and 1/4″ hex power screwdriving bits. The single-sleeve ratcheting chuck lets you really clamp down onto bits, and feels remarkably secure. As the chuck is tightened and the jaws close in on a bit, a very satisfying “click” can be heard and felt as the ratcheting mechanism engages, followed by the reassuring sound of the ratcheting action. 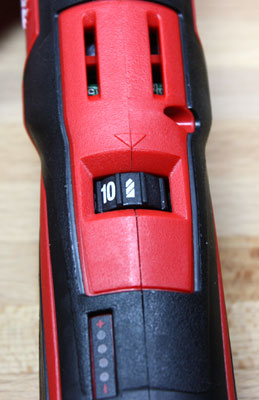 The variable speed control paddle switch works well and is comfortable to reach from various grips. Just below it, the control toggle switch is also easy to reach and engage, and has the expected forward, reverse, and center locking positions.

On the back of the drill, a knobby clutch adjust wheel is easy to adjust, and has 11 settings plus a drilling mode. During the drill’s operation, an LED will indicate when the set torque is reached as the clutch slips and the motor stops.

While not overly spectacular or extraordinary, the molded and textured grip make the drill very comfortable to hold. Even after extended drilling and driving until the battery gave out, our hands were in good shape. The drill is designed to be used in tight work areas, so it is reassuring to find that it was easy to grip even with the most awkward of hand positions.

At the front of the drill, just below the chuck, there are two LEDs – a white illumination LED, and a torque LED. When the torque output for a given clutch setting is reached, the torque LED will flash red, and releasing the paddle switch will reset the circuit.

At the rear of the tool near the battery is an LED fuel gauge. When the battery needs to be recharged, one light will flash for 2-3 seconds as the trigger is pulled. 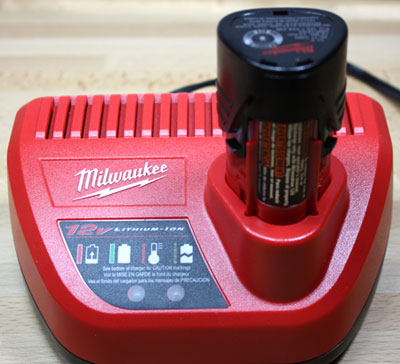 A single M12 battery and a 30-minute charger are included with the M12 right-angle drill kit. In our experience, the charger was true to its 30-minute claims. The battery can of course be used with Milwaukee’s other M12 tools, and includes quite a few protective features in case of overloading or high temperatures.

For those wondering why the kit only includes one battery and not two, consider that this drill is not exactly a “core” tool and that it will typically be used in conjunction with a pistol-grip drill or driver, M12 or otherwise. 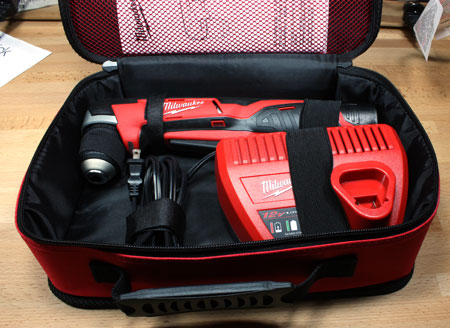 Included with the drill kit is a soft case that does a good job of securing and protecting the tool and charger. On the inside of the case are elastic and velcro straps that hold the drill and charger separately for transport or storage. While the case has a little bit of padding, it won’t offer the same level of protection as a hard case could. Then again, the soft case is much smaller and more manageable than a hard case.

As mentioned, the tool is very comfortable to hold and use. We were surprised by the amount of power that the tool could output despite its modest specs, and at no time did we ever feel it was underpowered. We’re quite impressed with the drill, but are currently putting it through a more rigorous evaluation to see if that changes.

Although it is intended as a special-purpose drill for drilling and driving in narrow or constrained spaces, we found that the tool can handle ordinary drilling tasks with relative ease as well. Actually, there were a handful of instances in the past week where we reached for this driver when our 18V drill could have been used instead. In those circumstances, we found that this drill’s shorter head height provided for greater stability and precision than our 18V drill would have allowed.

Also worth mentioning is that the drill has a spindle lock, meaning that when the tool is off, you can manually turn the driver. Because of this, you can easily confirm the tightness of a fastener or tighten/loosen one that require more torque than the tool can output.

Milwaukee’s M12 right-angle drill/driver is a very capable tool, not to mention comfortable to use and very well built. Based on our initial hands-on assessment, we most definitely recommend it. As mentioned, we are currently giving the tool a longer and more in-depth evaluation to determine if our original impression is accurate, but from the looks of it we will not be disappointed.

Thank you to Milwaukee Tool for providing the review sample.