ToolGuyd > Power Tools > Cordless > Quick Review: Milwaukee M12 Soldering Iron
If you buy something through our links, ToolGuyd might earn an affiliate commission. 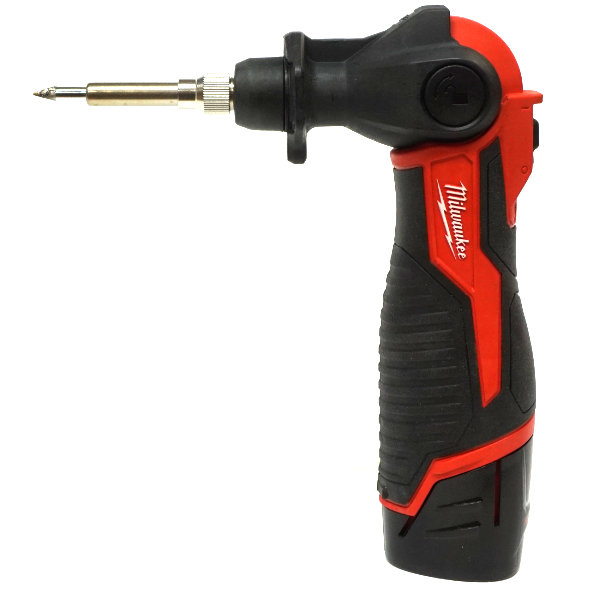 The other day I was installing some low voltage under-cabinet strip lighting in the kitchen and I had another opportunity to use the Milwaukee M12 soldering iron.

A portable soldering iron isn’t a tool I use every day or even every week. When I have serious soldering to do I, usually fire up my Metcal station at my workbench. If I have to take my soldering on the road so to speak, I’ve previously used an old Radio Shack butane soldering iron. While it is smaller and lighter, the biggest problem I have is that it’s hard to light.

Since I received the M12 cordless soldering iron sample from Milwaukee, when I need to solder away from my bench, I’ve been trying to use it, instead of my butane iron.

Before we get into the review, you might want to go back and read the preview to see all the features, but here are most of the relevant specs: 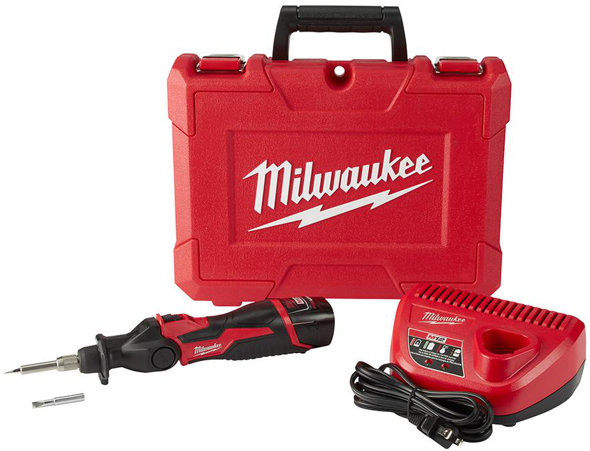 When I saw the Milwaukee cordless soldering iron at NPS17, my first question to the presenter was, “can it solder a penny?” This was a trick that an old engineer I studied under showed me. If the soldering iron you were trying to sell him couldn’t do this, he wasn’t interested.

Why is this relevant? Because you don’t melt the solder with the tip of the iron, you heat the material until it is hot enough that it melts the solder. Sometimes you need to solder to a large wire or ground plane. Surfaces like that can soak up the heat faster than the iron can keep up.

Of course nobody at the NPS show had a penny I could try to solder, and so this was one of the first things I tried when I received a test sample of the M12 soldering iron.

It took about 30 seconds to get the penny hot enough to melt the solder. I posted the video to Instagram last November 2017.

Soldering a penny with the @milwaukeetool M12 Soldering iron. Why solder a penny? Basically it shows that the iron can not only heat itself up to a high enough temperature to melt solder, but that it can bring a significant chunk of metal up to solder melting temperature. Most any cheap iron can melt solder, but there's more to soldering. You need to heat up the material hot enough to melt solder to get a good solder joint. Sometimes this is easy like when you are connecting a couple or stranded wires, but if you are trying to solder a ground pin to a PCB with a very large ground plane, it will carry the heat away. You won't be able to solder the pin until the ground plane in the area heats up hot enough to melt solder. Many corded soldering irons can't do this, let alone a battery powered iron. I'm impressed so far! #toolsample #toolguyd #milwaukeetools #milwaukeetool #cordlesssoldering #m12 #m12solderingiron #nbhd 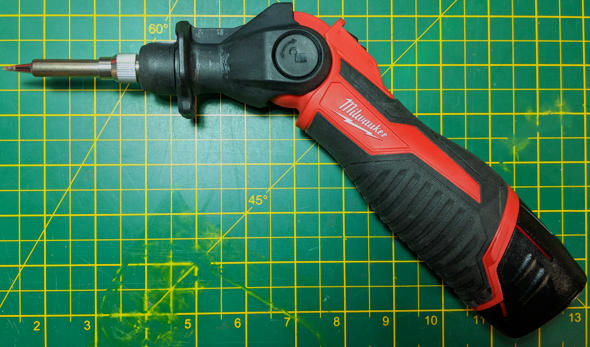 With a bench soldering iron, you have a dedicated stand that you return the iron to when you aren’t using it. Portable soldering irons have to be set down in uncontrolled environments. Some portable irons have a built in stand, but that’s just one more thing to get in the way.

The M12 soldering iron doesn’t need any sort of stand, as it is pretty stable in all of its configurations. As long as you put it down on a level surface, the hot tip won’t contact the surface.

Something I found useful in some cases was to use a 6-cell XC battery. Not only did it extend the run time considerably, but the 6-cell M12 batteries provide a really stable base. The only disadvantage is that it adds half a pound to the weight of an already heavy soldering iron. 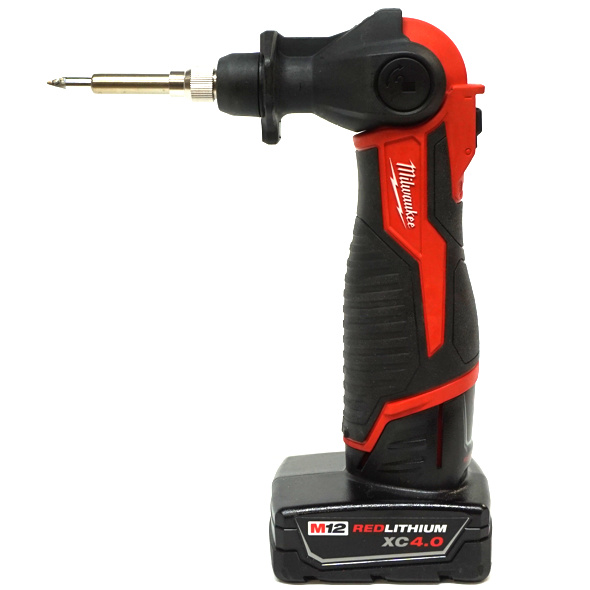 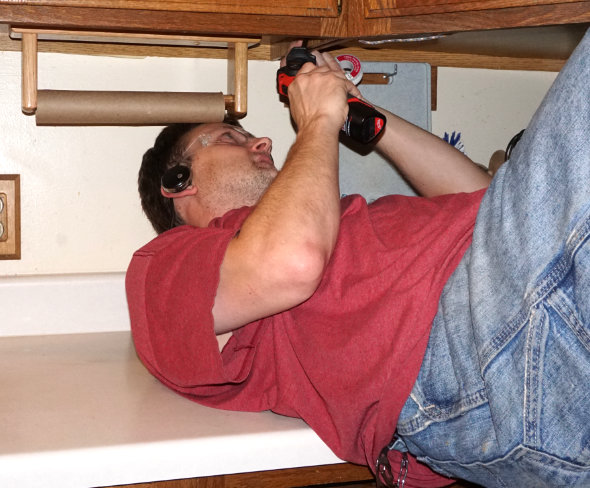 That brings me back to installing the under-cabinet lighting. I wanted the installation to be invisible when you are standing at the counters. I couldn’t run a continuous LED strip because the lighting was going under three different cabinets. So I needed to cut three different strips, and connect them with wire fished through holes in the bottom of the cabinets.

There was really no way I could pre-assemble the strips. I suppose I could have used connectors, but that would have required drilling larger holes through the cabinets.

Connecting the strips together required me to get on my back on the counter top and solder above my head. 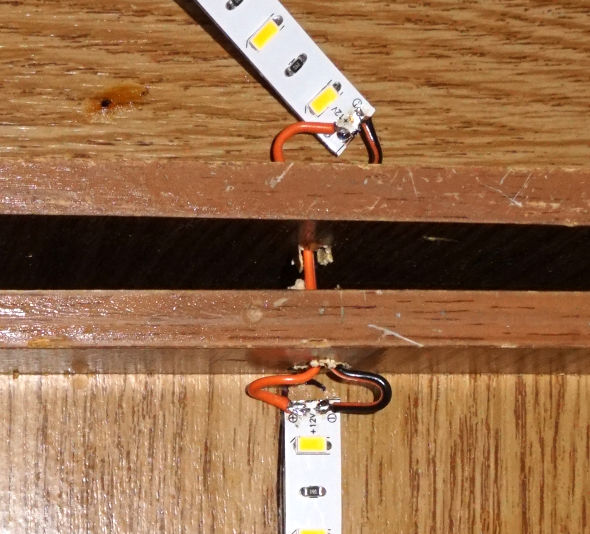 In this case, even though the M12 soldering iron is bulky, it worked pretty well. When I wasn’t using the iron, I was able to put it down safely and pick it up again without looking because I wasn’t afraid it was going to tip over and burn something. 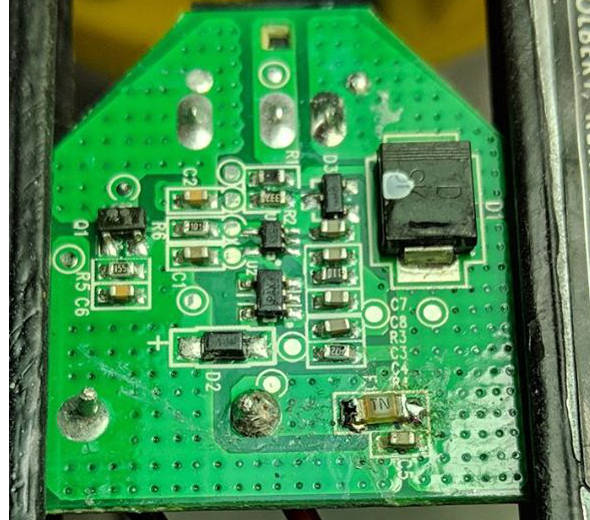 Besides soldering wires, I’ve tried soldering components on printed circuit boards. Above is an example at one such attempt. I blew out the fuse on an M12 power source. You can see it in the lower right (marked TN). You can also see my attempt to solder the new fuse back in place with the M12 soldering iron – not my greatest work again.

To be fair, Milwaukee designed their M12 cordless soldering iron for automotive installers, field techs, and other such users. It’s more meant for soldering wires than small components like surface-mounted fuses.

With the bulky iron, I found it really awkward to position the tip of soldering iron on the component pads where it needed to be.

And no, I didn’t touch those other resistors and capacitors, that’s how I found them. It almost looks like this board was hand soldered.

Would I recommend the M12 soldering iron? The answer is it depends. I find it easier to use than a butane soldering iron. You don’t have to worry about burning something when you put it down, and it gets the job done just as well.

A smaller butane iron is cheaper, smaller, and more maneuverable, but if you are in the field quite a bit, you are already in the M12 system, and you don’t mind the large size, this soldering iron might be a good fit.

This soldering iron is definitely not a replacement for a desktop soldering iron. Instead, it’s what you can take where a traditional soldering station cannot go. 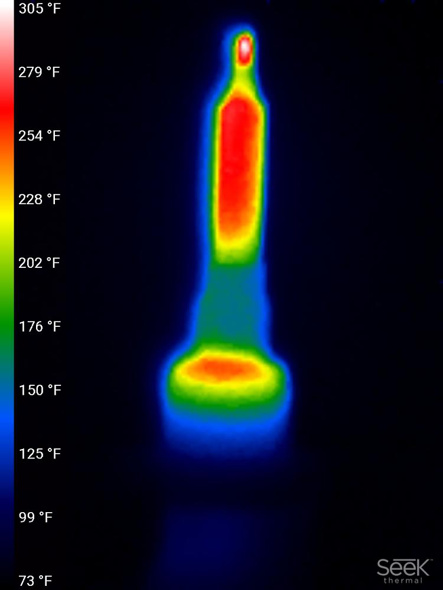 Here’s a thermal image of the tip after the iron has been powered on for about 5 minutes. The tip temperature isn’t accurate, but you can see which areas heat up relative to others. The tool itself remains pretty cool. 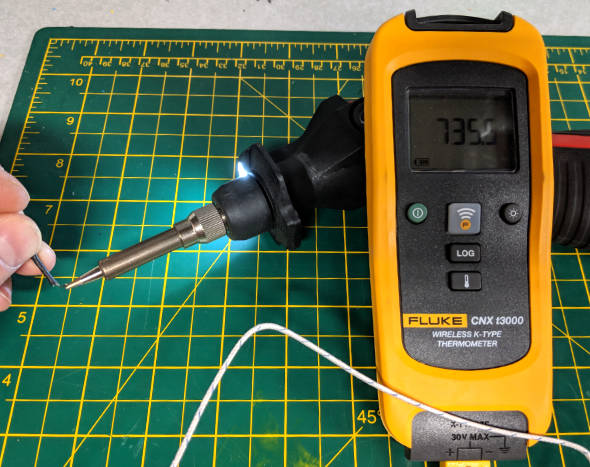 I tested the tip temperature with a thermocouple and measured it to be 735°F.

There could be a few reasons I didn’t get up to 750°F. First, I wiped the tip dry of solder because I was afraid of ruining the thermocouple, but the liquid solder might be necessary for proper heat transfer. Second, the thermocouple might be a few degrees off. Finally, Milwaukee might have been a little generous specifying a 750°F max temp. I’m not going to be too critical though, because I measured within 2% of their stated max temperature.

On my last M12 soldering iron post, @igdesignla told me that Hakko T18 tips also fit the iron. So I went to @micro_center and picked up a T18-D16 tip to try. I was really disappointed that the Hakko tip I picked up was just a hair shallower than the @milwaukeetool tips. I can still use it, but when I tighten down the collar, it puts pressure on the heating element rather than the metal wall. I tried soldering with the Hakko tip and it worked just fine, but I can't recommend it. It's possible off brand T18 tips fit better or other Hakko T18 tips might work. I could also either modify the iron or make a spacer, but that's an experiment for another time. #toolsample #toolguyd #hakko #replacementtip #soldering #solderingiron #cordlesssolderingiron #m12 #m12solderingiron @milwaukeetool #milwaukeetool

I was really excited when somebody told me that the Hakko T18 tips might be compatible with the M12 soldering iron, as this would open it up to a huge variety of tip sizes and styles that you could use for different applications.

But, I discovered that they were just different enough that they didn’t completely come in contact with the flair on the shaft. It turns out they are still usable, but I wouldn’t recommend them, because you might damage the heating element.

Thank you to Milwaukee for providing the review sample.