ToolGuyd > Power Tools > Cordless > Milwaukee M12 Thermal Imaging Camera
If you buy something through our links, ToolGuyd might earn an affiliate commission. 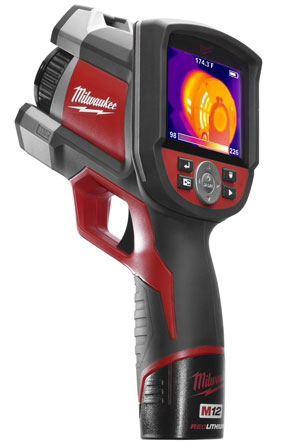 The M12 thermal imager is capable of simultaneously capturing a thermal map and a visual image, which can be viewed back-and-forth in-camera or side-by-side in a report. 2 LED floodlights help illuminate dim work areas visually and in the corresponding photographs. The camera is rated at IP54 for weather and dust resistance, and is designed to be comfortably operated with gloved hands.

On paper, the M12 version looks to have an edge against competing models, but competitors (e.g. FLIR/Extech and Fluke) have many more years of experience in designing and troubleshooting these types of tools. It will be interesting to see if Milwaukee can successfully encroach on their territory.

The tool is bundled with a 2GB SD card, USB cable, 1X M12 RedLithium battery, 30-minute charger, SD card reader, carrying case, and report creation software. MSRP is $2500, and a tool-free version (2260-20) may be available in the future.

(Video Preview by Tools in Action)

(This post is a revision of the preview post first published on July 25th, 2011 to include updated specs and product details.)