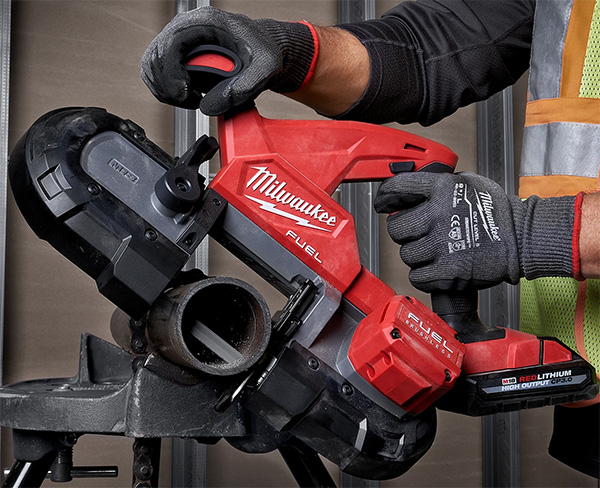 Milwaukee has announced a new M18 Fuel compact band saw, model 2829. Technically, there are two new models, one with a traditional design and another with a dual trigger safety switch.

The new Milwaukee M18 Fuel compact band saw is said to be the:

The new band saw is said to have the fastest cutting speed and largest cutting capacity of any compact band saw.

Additionally, there will be an optional/separate tool-free pipe reamer attachment that mounts to the back side of the tool. The reamer can deburr 1/2″, 3/4″, and 1″ electrical conduit.

The dual-trigger compact band saw comes with a blade cover accessory that can be purchased and added to the single-trigger model.

Blade covers help to protect the blade track from damage and also minimizes blade exposure to the user.

Dual-Trigger Band Saw Kit (2829S-22): Nearly identical to the 2829, the 2829S features a dual-trigger design that requires both hands on the tool for it to operate, and it also comes with band saw blade covers

Let’s recap what we know about the new Milwaukee 2829 compact band saws:

Milwaukee says this saw cuts faster than other compact saws, and has higher capacity.

On paper, the Dewalt saw has a higher FPM rating, but it could very well be that Milwaukee’s has a higher operating cutting speed. No-load speeds are one thing, application speeds are another.

The fact of that matter is that claims such as “the fastest cutting speed and largest cut capacity of any compact band saw” have to be backed up by repeatable data.

If you ask me, it seems quite reasonable that a 2020-generation Milwaukee brushless motor-powered band saw will perform faster and better than a brushed-motor band saw that Dewalt launched in 2013, regardless of what is said on paper.

The new Milwaukee band saw weighs 7.7 lbs without battery, and the Dewalt 8 lbs.

What’s also interesting is that a cordless power tool like this one would typically be kitted with XC battery packs. But here, Milwaukee is bundling the new compact band saw with their next-gen High Output 3.0Ah compact batteries. 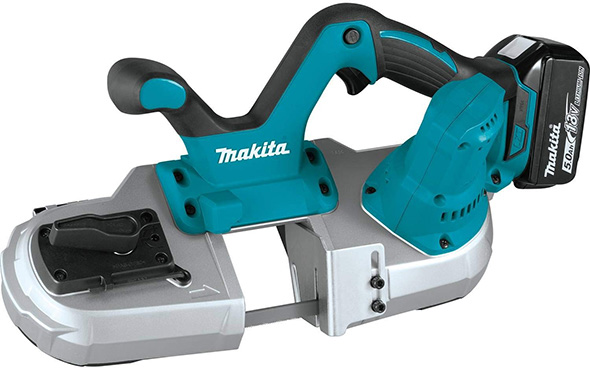 Makita came out with a new compact band saw in 2019. Compared to this new Milwaukee saw, the Makita XBP03 has a slightly smaller blade size, 2-1/2″ x 2-1/2″ max cutting capacity, and 630 ft/min no-load cutting speed. The Makita weighs 9 lbs with battery.

The Makita kit is discounted at the time of this posting, to $340, and it comes with (2) 5.0Ah batteries, an aluminum housing, and a rear-side blade cover. Makita designed their saw for one-handed operation (if or where needed).

Makita does also have another model with plastic wheel guard that weighs 7.5 lbs with battery.

So, compared to Dewalt and Makita compact band saws, Milwaukee increases the cutting capacity from 2-1/2″ to 3-1/4″, which is quite a big jump up.

On-paper, the new Milwaukee saw has a lower cutting speed compared to the other models we checked, but I would presume the saw delivers quicker real-world application speeds. Without proof of the matter, Milwaukee’s legal department couldn’t have cleared any claim that the saw delivers the fastest cutting speed of any compact band saw.

And again, we’re talking about a tool with a brushless motor vs. competing models with brushed motors. The Milwaukee saw features Constant Power Technology that maintains cut speed in the toughest applications for optimal performance. From all this, the takeaway for me is that the Milwaukee likely maintains cutting speed [in certain applications?], which would all for their claim to be true despite the disagreement of on-paper specs.

We’ll reach out to Milwaukee for more details and clarification about this.

If you are already a Milwaukee M18 cordless power tool user, the new compact band saw is considerably lighter than the previous model (24.9% if my math’s correct), and it has faster on-paper specs. Plus, the brushless motor is going to give you a boost in power and efficiency.

For the $50 difference in kit pricing, the new band saw is lighter and faster than the previous model (likely largely thanks to the brushless motor tech), includes a faster charger, and comes with High Output 3.0Ah batteries. That seems reasonable, but hopefully users will see some promos, rebates, or other incentives to upgrade.

Overall, this seems like a solid new offering by Milwaukee, and it seems like a great idea that they have separate single and dual-trigger versions.

The conduit reamer attachment also seems like a neat design. Some might gripe that it’s an additional purchase, but those that don’t need it will be happy that they’re not forced to pay for the functionality.