ToolGuyd > Power Tools > Cordless > New Milwaukee M18 Fuel D-Handle and Barrel Grip Jigsaws
If you buy something through our links, ToolGuyd might earn an affiliate commission. 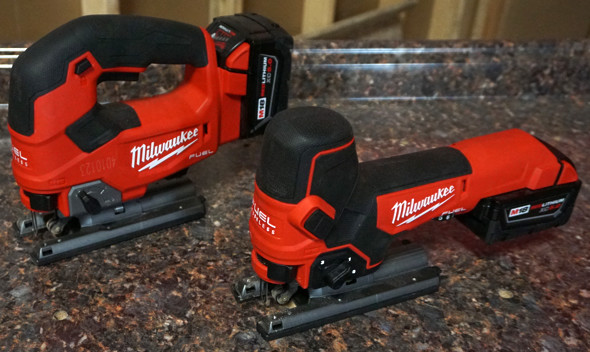 This year at NPS18, Milwaukee Tool came out with two new M18 Fuel jigsaws: a barrel grip jigsaw and a D-handle jigsaw.

Both saws are driven by a brushless motor that can deliver up to 3500 SPM (strokes per minute). Milwaukee talked about the fast blade speed being important not only for cut quality, but for control. To make even more aggressive cuts, each saw has several orbital modes actuated by a lever on the left side.

Since these jigsaws bear the Fuel moniker, they are powerful enough to cut harder materials, like thick hardwood and metal. Milwaukee claims they can cut up to 105 linear feet of 3/4″ laminated counter top on one 5Ah battery, or about 17 sink openings. 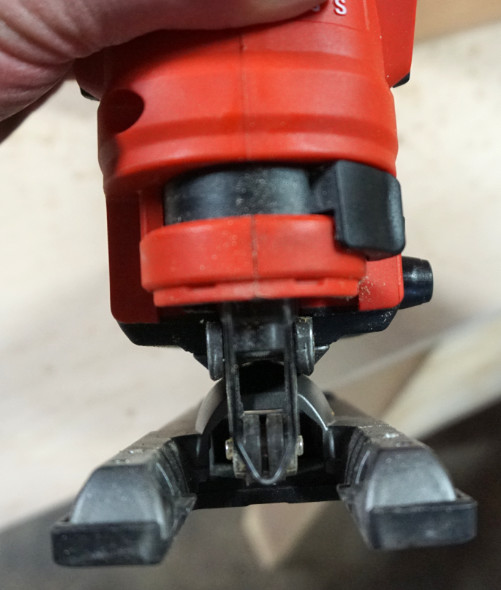 To make changing blades easier, both jigsaws have a tool-less blade change lever on the front of the tool. Each saw also has a built in blower to keep debris from obscuring the cut line and a built-in LED to illuminate the area.

Both jigsaws feature a dust collection port on the rear of the shoe. We were assured that each saw will actually ship with the dust port connector, it won’t be an additional item you’ll have to purchase. 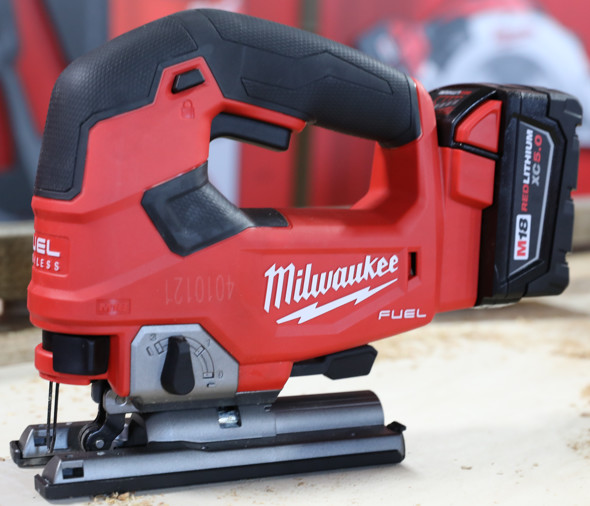 The D-handle jigsaw has a variable speed trigger with a safety lock above the trigger to prevent accidental activation. 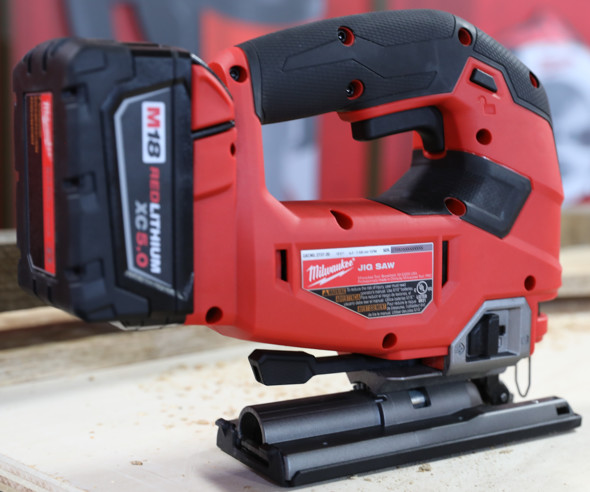 The lever underneath the D-handle saw allows for easy and tool-free adjustment of the shoe angle. 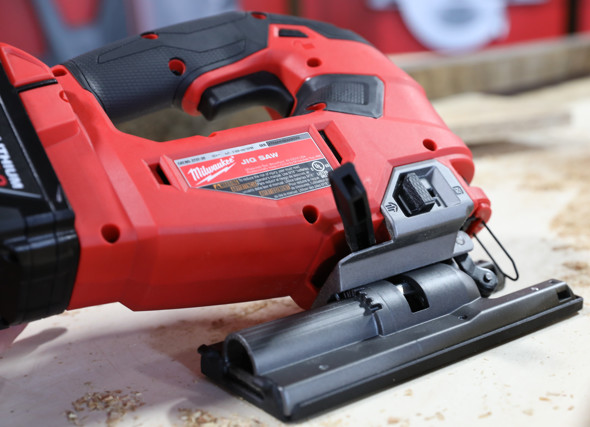 With the bevel angle lever actuated, you can see the positive angle stops on the shoe. 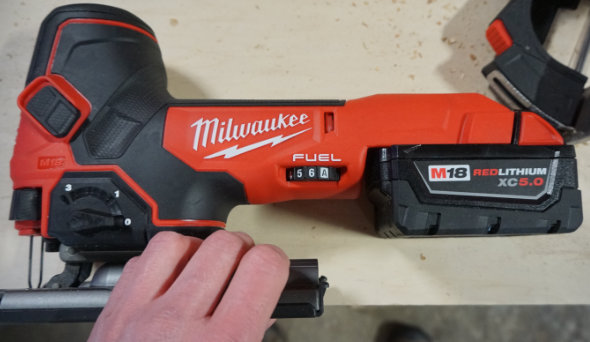 On the barrel grip jigsaw, rather than a variable speed trigger, there is a speed selection dial for controlling the cut speed. The dial has 6 different speed settings plus a 7th auto-controlled start setting. This setting allows you to enter cuts more accurately by starting the saw at a low SPM and ramping up to full speed once the saw senses you are in the material.

Above is an example of the auto controlled start in action, notice how the jigsaw starts out slowly then speeds up as it engages the wood. 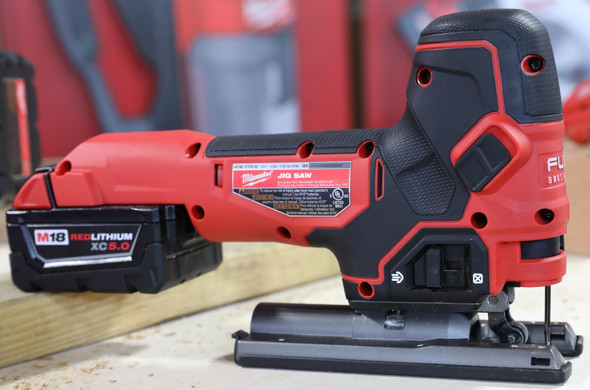 The barrel grip has ambidextrous on/off switch (one on left and one on right). The way you turn on the barrel grip jigsaw is a little different. You push forward on either spring-loaded switch until the jigsaw turns on — once it turns on, you have to let it go, otherwise the saw will turn off again. This is to prevent the saw from staying on in your bag or toolbox if the switch is accidentally actuated.

Due to the positioning of the battery on the barrel grip, we were told that if you want to use a battery larger than 5Ah, it might interfere with the dust collection port. 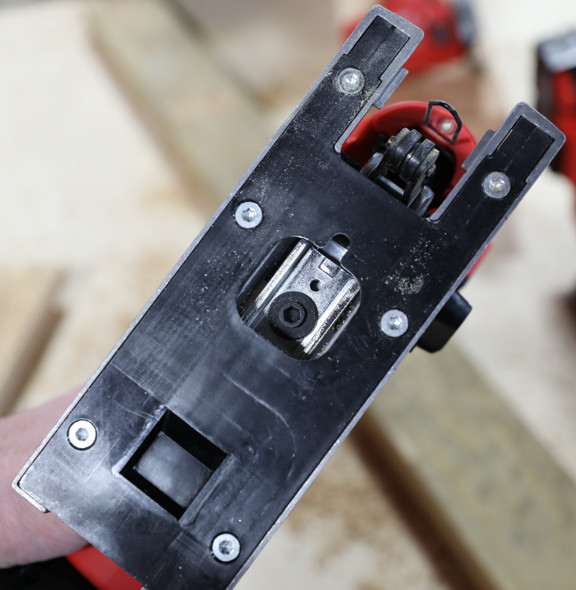 Because of the low profile design and the position of your hands on the barrel, they did not want to put a tool-less bevel angle adjustment lever on the saw. To adjust the bevel angle, you need to remove the plastic shoe and access the screw on the bottom of the shoe. At least the required hex key stores in the shoe so you don’t have to go looking for it.

The M18 Fuel barrel grip jigsaw will launch a little later than the D-handle. Milwaukee says it’ll be out November 2018.

I was really excited for the new barrel grip jigsaw — so much so that I pretty much forgot about trying the D-handle saw until I had to switch rotations. Unfortunately I never got back to it. So my observations are about the barrel grip jigsaw.

It took a few tries to get used to the power switch on the barrel grip jigsaw. I’d try turning it on and it would turn off right away. I had to ask the presenter what I was doing wrong and he explained that I had to let the switch go when the saw started. After a few tries it became intuitive.

The placement of the switch did seemed a little awkward for me, I needed to stretch my thumb and slightly change my grip to turn on the jigsaw. Ideally you shouldn’t have to change your grip at all when you turn the saw on or off. Maybe it’s just made for people with bigger hands.

The saw cut smoothly in non-orbital mode and the blade really didn’t deflect much when I was making turns in the 2×4. I’d still like to see how it performs in plywood or hardwood, but we’ll have to wait until the saws officially launch.