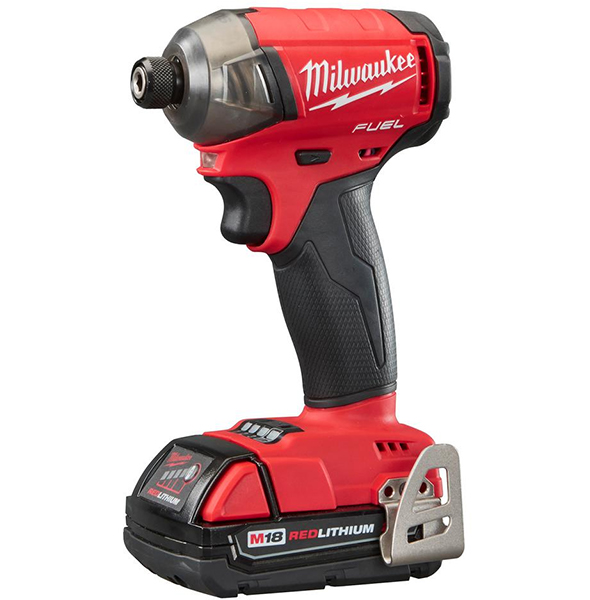 Milwaukee has officially announced the new M18 Fuel SURGE brushless oil pulse driver, and you might have even seen a few early reviews of it.

We’ve got a test sample in-hand, and also spent about 40 minutes chatting with Cole Conrad, a group product manager over at Milwaukee Tool. After he brought it up, I remembered our lengthy discussion of the M18 Fuel 2nd generation impact driver that was introduced back in 2015.

There are quite a few things to share with you about the new M18 Fuel Surge hydraulic driver, and yes a thorough review is also in the works.

1. This Tool is Special

To start, it has a name – the Surge. It’s not often that Milwaukee names their tools, although I’ve noticed they’ve started naming their LED lighting products to help make them all easier to identify.

The Surge is definitely not an impact driver, although it resembles one and does many of the same things.

Instead of a hammer and anvil impact-type mechanism, it works by means of a hydraulic system. It exerts torque as the oil is compressed, in a cycle of compression and relaxation.

Milwaukee is putting a lot of emphasis in educating the media and end users about the intricacies of the Surge, and for good reason. Its on-paper specs aren’t all that impressive, until you remember that it’s not an impact driver and cannot be compared directly.

Milwaukee cautions that, while the Surge is in a lot of ways similar to an impact driver, it’s really in a class of its own. Rather than boost numbers above the modest-sounding 450 in-lbs of torque, they optimized the design so that there wouldn’t be any tradeoffs in power or size. You’ll read my feelings about this in a moment.

There are currently 3 competing oil impulse drivers on the market that we know of:

Here’s what Milwaukee has to say about theirs. The bold emphasis was our doing.

*FLUID-DRIVE™ Hydraulic Powertrain- When paired with the exclusive technologies in M18 FUEL™, the SURGE™ is in a class of its own.

The “oil-impulse” options available today ask the user to choose between some pretty significant trade-offs. Some options focus on speed and torque at the expense of size and weight, while others focus on ergonomics at the expense of performance. With the new M18 FUEL™ SURGE™ ¼” Hex Hydraulic Driver users will experience the best of both worlds- all the holistic benefits of an oil impulse mechanism without the extreme trade-offs.

So not only is this a new product class for Milwaukee, they’re claiming the Surge to be better than competing models. 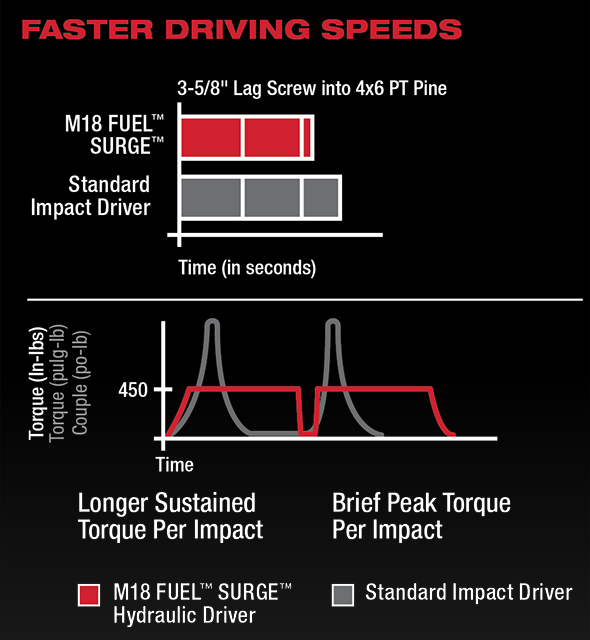 The Surge driver is said to deliver 450 in-lbs of sustained torque. So… what’s that?

Standard 18V impact drivers, whether equipped with a brushed or brushless motor, deliver around 1400 in-lbs to 1800 ib-lbs of peak torque. This torque is delivered in a quick and short burst.

So what you want to look at is the area beneath the torque curve. When you do that, the total torque delivery turns out to be higher, resulting in greater application speeds.

Milwaukee says that, according to their research, 90 to 95% of fasteners are small or medium in diameter, which is what the Surge was designed to handle.

This brings up a side question – how would the Surge hydraulic driver compare to a regular drill/driver, which has near-continuous power output?

Keep in mind that a typical drill is slower, and that peak torque ratings are often for the slower of 2 or 3 speed ranges.

And while in theory an oil pulse driver is not as reactionless as an impact driver, kickback or counter-rotation should still be less severe than when jamming or binding happens with a drill.

There’s less metal-on-metal contact, resulting in lower noise. In our phone call with Milwaukee, we were told that the noise output is rated at 76 dB, which is below the OSHA requirement that hearing protection be worn in the presence of noise 85 dB and louder.

Milwaukee’s field testing with contractors resulted in around 1/2 of the users complimenting the tool on being quieter than impact drivers, and the other 1/2 considered the primary benefit to be how much smoother the Surge feels in use.

Indeed, in my own tests so far, I have found that the Surge does not vibrate the work or my hands as much as a traditional impact driver would.

It’s speedy, noisy but less noisy than an impact driver, and even more comfortable to use.

To build upon what I mean by noisy. The Surge is quieter, not quiet. You don’t get anything like the shrill bang-bang-bang as with an impact driver. You might still want to wear hearing protection even if not required to by OSHA.

I don’t think I have its weight noted anywhere, but I’d say it’s comparable in size and weight to an M18 or M18 Fuel impact driver. Or any premium brushed or brushless impact driver.

I think someone asked this question. If that person was you, please speak up so I can give you credit!

So how well does the Surge work when the going gets cold?

Milwaukee said that down to -20°C, there’s no performance difference. That’s -4°F

Below -4°F, the tool will feel slow and sluggish in use. So what do you do? Hold the trigger for 5 to 10 seconds. The oil in the sealed hydraulic chamber will heat up, and warm to normal operating temperatures. After that quick warm up, it should work no different from at warmer environmental temperatures/

Milwaukee has tested the Surge to lower temperatures without seeing any performance issues. We’ll have to bug them for an exact number, but I’m told that it was tested to at least -20°F.

So… what will happen in a few years?

Still, time and use can be hard on tools, changing their operating parameters.

Milwaukee is still testing the Surge’s longevity. So far, the Surge has already exceeded their life target of 5 years. They’ve been testing it in a combination of hard and soft fastening applications, and thus far the Surge has endured more than 3 cycles of accelerated testing, meaning it’s lasted longer than 3x longer than 5 years of simulated use. They tests are still underway, and will continue until the point of failure.

While simulated testing isn’t the same as real-world use, it should put you at ease that the tool won’t pop seals or require heavy maintenance after a few years of regular use.

Similar to many premium brushless impact drivers, you get 3 speed and torque settings. There’s also a self tapping screw mode.

8. What’s that Rubbery Business at the Front?

It’s a rubber guard that serves 3 purposes. First, it helps to protect delicate work surfaces. Second, it shields air vents near the nose of the tool. Lastly, it provides some visual differentiation, so that it doesn’t look exactly like an impact driver.

There are lots of air vents, surprising me a bit, but it makes sense. Compressing and unloading a fluid can heat it up. And remember what was said about operating the tool in cold environments. Even with no load, the hydraulic fluid will heat up.

Milwaukee is targeting certain users and trades who work under certain conditions.

So you often work in occupied spaces? Offices? Homes? Hospitals?

When using an impact driver, you might forget all about the noise, especially if you’re wearing proper hearing protection. Your clients might not be as used to and accepting of the noise.

The Surge is also aimed at commercial tradesmen, where safety and user health are important and sometimes closely monitored.

And really, it’s for anyone who wants a quieter driver.

Keep in mind, though, that the Surge hydraulic pulse driver is intended for small and medium fastening applications. Don’t slap on a socket adapter and think you can remove rusted-on lug nuts. That’s a job for beefier tools.

As you might be aware, some of Milwaukee’s M18 drills and drivers will see small performance gains when you pair them with a higher capacity battery pack. This is best described as an XC bonus.

Compared to when using the Surge with a compact battery pack, you should see a boost in power of around 5-10% when using it with an XC high capacity battery pack.

I’m pretty optimistic about the Surge. Thus far it’s been a pleasure to use.

If you want a quieter fastening tool that will get most small and medium driving tasks done just as fast or faster than a traditional impact driver, the Surge is going to make a compelling case.

Do you have any questions I should consider when continuing to test the Surge for review?

Thank you to Milwaukee for supplying a review sample unconditionally.