ToolGuyd > Power Tools > Cordless > New Milwaukee M18 Radius Site Light with One-Key
If you buy something through our links, ToolGuyd might earn an affiliate commission. 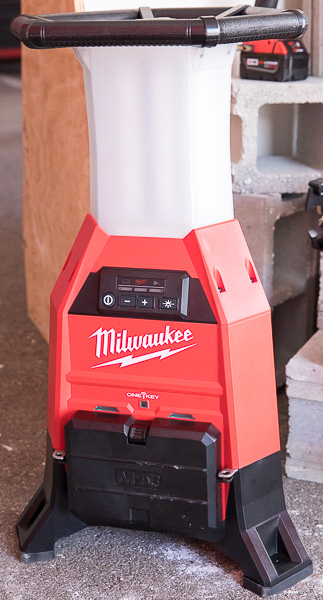 Milwaukee has officially announced their new M18 Radius Site Light, which made a debut at their recent NPS17 new tool media event.

I had very little hands-on time with the new M18 Radius Site Light, and I used that time to examine and photograph its features. I can’t tell you much about its user interface, or anything of the sort, at least not yet. 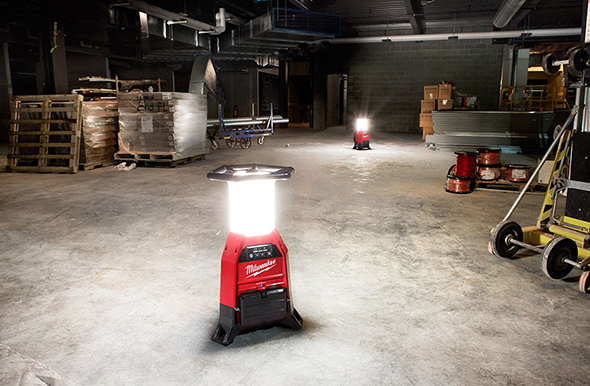 What kinds of use was it designed for? Good question. Short answer: I’d say larger commercial spaces and jobsites. It’s big, bright, and promises to be versatile, but it’s not going to be a good worklight for everyone, and that’s before we even talk about its price.

There will be 2 versions – with and without One-Key. The non-One-Key version is appreciably less expensive, but the One-Key version seems to be the one to buy. I’ll get into that later. 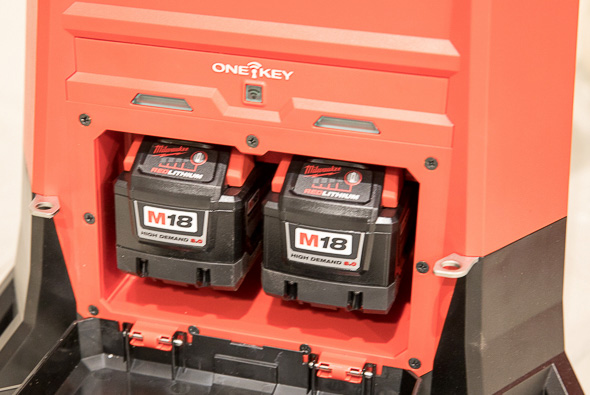 Milwaukee designed the new M18 Radius Site Light with a 2-battery bay. If you go with the One-Key version and plug it in, this becomes a 2-battery sequential charger. 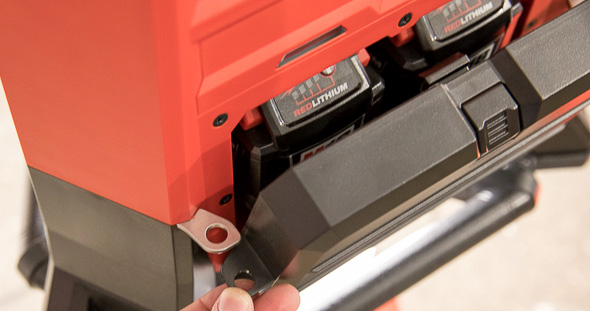 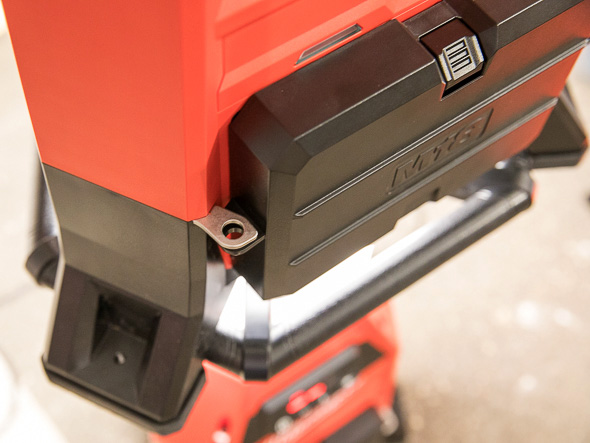 The battery bay is lockable. 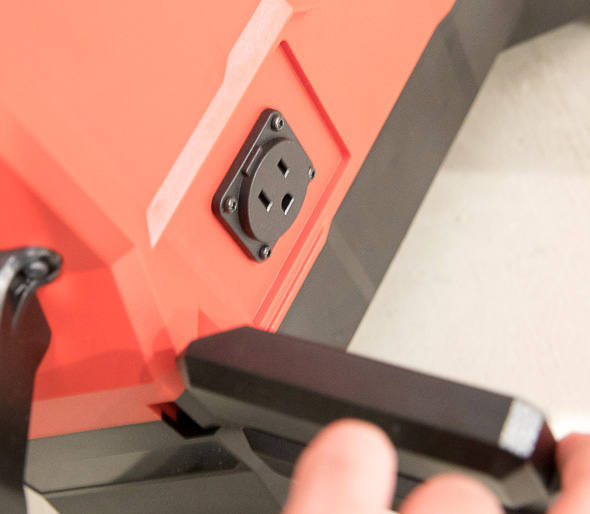 The Site Light can be daisy chained. You can have up to 8 lights on a single circuit. The plug compartment has a spring-action door, to keep out dust and other contaminants when it’s not being used. 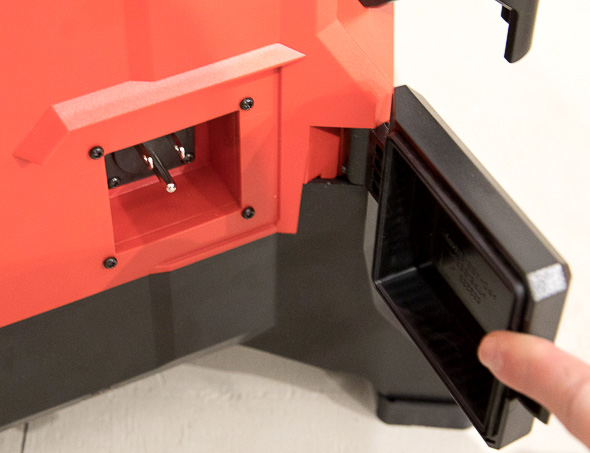 The male plug, for attaching a standard extension cord to for AC power, is also protected being a spring-action door when it’s not connected and actively being used.

The Site Light is large and heavy, but an abundance of large handles helps to make up for that. 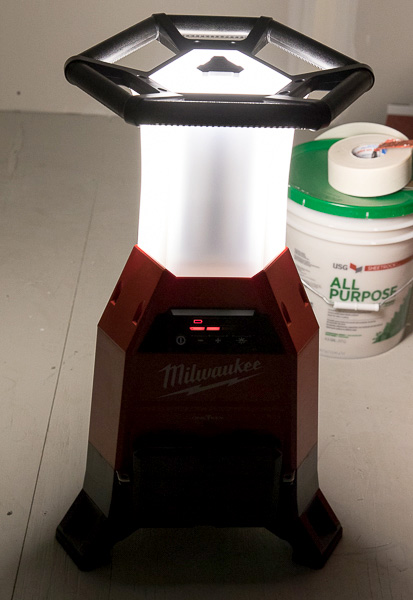 I don’t remember thinking about its brightness, but Milwaukee says that their M18 Radius Site Light is the brightest site light in the industry. It’s rated at delivering up to 9000 lumens.

With the One-Key version, you can:

Optimize Brightness to suit the job at hand. You can also view remaining battery charge and can tweak the brightness in response. In other words, you can dial bacfk the brightness if you need a little more runtime to get through the day.

Adjust Light Direction with control over front or back, 180 degrees through the app.

Program Automatic Schedules. There are presets for 30, 60, and 90 minute runtimes, or you can set a custom duration. You can program specific start and sop times.

You also get integrated tool tracking.

In addition to being daisy-chainable, the new M18 Radius Site Lights can give each other piggyback rides.

Milwaukee’s new M18 Radius Site Light looks to directly compete with the Dewalt 20V Max and FlexVolt DCL070 Bluetooth LED area light, which is currently $399 for the bare tool, or $499 for a 1-battery FlexVolt kit.

I didn’t have much time to form any sort of opinion on the M18 Radius Site Light, but it seemed to be solid, and I think I remember noting that its legs had very nice foot pads that allowed it to rest comfortably (and likely non-marring) upright or on its side.

The One-Key version costs $100 more, but has much greater versatility in the form of One-Key app brightness customizations, on/off controls (I’m assuming), directional aiming, and scheduling. There’s also the IP54 protection against dust, water, and other contaminants, and the dual bay charging feature.

With the One-Key’s dual-bay charging feature, you could plug in your lights daily or however often you need to. Not having to remove the battery packs and manage them separately might be a time-saver.

The directional aiming seems a little iffy to me – the 180° part suggests you have some controls, but coarse ones. You probably cannot, for instance, set it to have a 90° beam, 120° beam. or 270° beam.

This looks to be a strong but specialized addition to Milwaukee’s growing cordless LED lighting portfolio.

I had not anticipated there being such a large price gap between Milwaukee’s Site Lights and Dewalt’s DCL070.

Even if I’m wrong about Milwaukee potentially (eventually) enticing users with free promo battery packs, the non-One-Key version skips too many powerful features.

Commercial or institutional buyers might look at the non-One-Key version, but I think a great majority of users will only interested in the One-Key version – if they can get over the price.

Is this something you could use for your work? How or where would you use it?