ToolGuyd > New Tools > Milwaukee M4 Cordless Tools
If you buy something through our links, ToolGuyd might earn an affiliate commission. 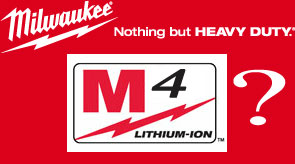 Update: Milwaukee has officially announced their new M4 line of cordless power tools, with the first M4 product being a pivoting-handle screwdriver. Following is the original discussion and predictions that we posted four months prior to the M4 announcements.

We have seen reasonably credible evidence that Milwaukee might be working on a line of M4 4-volt lithium ion power tools and accessories.

Craftsman released a line of 4-volt tools late last year, and it was a major flop. Home Depot carries a line of Ryobi 4-volt Tek4 tools, and every time we see them in store they’re covered in dust. So why would Milwaukee look to jump into such a market?

From what we’ve seen, it is suggested that Milwaukee is mainly focusing on M4 screwdrivers, a flashlight, and the battery system. With Milwaukee under the same TTI umbrella as Ryobi, there should be some valuable market data that could help Milwaukee ride into the fray without training wheels, but they would undoubtedly move slowly with an M4 line. It is logical that, if they are indeed working on an M4 line, they would kick it off with few tools to minimize the financial risk.

The way we see things, a compact 4-volt battery system might give Milwaukee engineers greater design freedoms when it comes to lighter duty tools that don’t really need the power output M12 batteries are capable of delivering. M12 tools are almost as compact and lightweight as can be, but there are inherent size, weight, and cost considerations that might have forced Milwaukee designers to back-burner certain new tool designs.

If the M4 line is ever realized, the tools would almost definitely be marketed as complimentary products. That is, there is no way Milwaukee would ever market them as 12-volt replacements. Instead of conventional tools, like drills and saws, we would most likely see new accessories and equipment in a similar spirit as with the M12 line (e.g. the M12 heated jacket). (We would totally go for some M4 heated gloves.)

While many power tool users might scoff at the idea of professional-grade 4-volt power tools, there’s definitely the potential for great success if Milwaukee does things right. We know Milwaukee is into developing game-changers, and so hopefully they’re working on the unconfirmed M4 line with a similar approach. And remember, many seasoned 18V users laughed at the “gimmicky” 12V “toys” that hit the market in recent years, until using them for the first time.

We know that some of you might not share our hopefully optimism about what we believe to be pending M4 developments. And maybe we’ll never see such tools because Milwaukee finds the risk too high and reward too low. But right now we’re keeping an open mind.

There was no mention of anything M4-related at Milwaukee’s recent new product media event, so a 2012 launch is definitely out of the question. Perhaps we’ll see something in 2013, at the earliest.

Right now, it would be best to treat all this is as unconfirmed speculation. We trust our sources, insight, and judgements, and our predictions come true more often than not, but we really don’t have many strong details to go by. We tried to choose our words carefully to reflect this. Now that we know there’s an M4 power tool line in the works – or at least on the drawing boards – we’ll be hunting for more information.