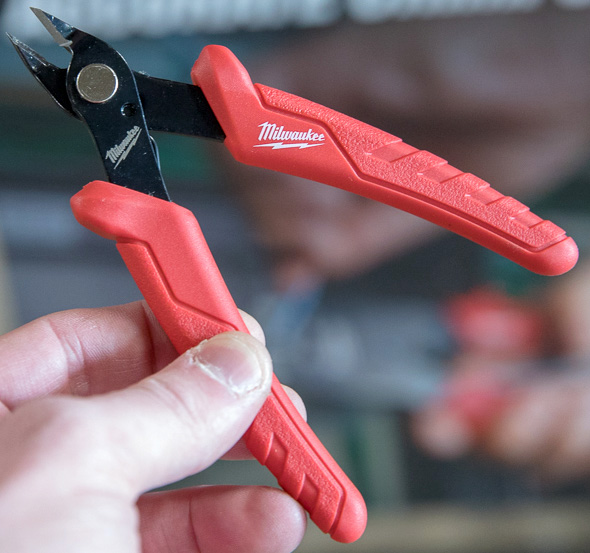 At Milwaukee’s recent NPS18 new product show, there was no shortage of “gotta have that!” tools.

There are awesome new cordless power tools, new Packout tool storage products, new ratchets (yes!), new circular saw blades, a 3-in-1 vac that was far quieter than I anticipated, and many other exciting tools.

There’s also this teeny tiny mini flush cutting pliers. It’s great to have something like this around when precision and cut quality matter, or maybe you just need to work in a tight space. I’m told that these cutters will have iron carbide blades, for greater longevity and very slow wearing.

I tested them out briefly on some 4 conductor pair network cabling. It looks like the new flush cutters will be joining the low-voltage tools that were announced last year and recently released, but they can be used for so much more than that.

See Also: How do you cut cable ties?

Mini cutters are great for cutting cable ties, for example. I also use them on electronic components and wire leads.

There was nothing surprising about the pliers, good or bad. They were comfortable to use, but these might be prototyped handles. There was a very slight offset of the blades, which helps produce clearer non-pinching cuts.

I’m told that they’ll be priced at around $9-10, which is fair for something like this.

This kind of tool doesn’t stand out very well, both at Milwaukee NPS shows, and on store shelves. But it seems like a solid offering, and is one more example of Milwaukee’s goal of being solutions provider. Well, they’re getting there.