ToolGuyd > New Tools > New Milwaukee Packout Slim Parts Organizers, Tool Bags, and Accessories
If you buy something through our links, ToolGuyd might earn an affiliate commission.

Milwaukee’s Packout tool storage system was introduced last year, and it seems to have been fairly popular. Yes, the tool boxes are a little pricey, but promos and holiday deals (such as Acme’s) can help with that.

I remember commenting about the original Milwaukee organizer at a Milwaukee NPS event (2015?) and I might have done the same last year when the Packout tools were showcased.

For example, a large bin, such as the smallest sized bin in the regular sized organizer, might be fine for holding dozens or even hundreds of wire connections. But what happens when I need to organize parts that take up a fraction of the space?

There are ways to use large bins if that’s all that is available, such as by bundling parts in small baggies or other small sub-containers. But most often, I opt for a different organizer.

I have a couple of Sortimo T-Boxxes, mainly the ones with trays that separate each organizer into 2 levels. I use the ~2″ x 2″ bin size most. That allows me to use 48 standard-depth bins in an organizer, or 92 half-size bins in two-level organizer.

I outgrew Stanley’s 25 compartment organizers, especially after it seemed they dropped in quality.

So, I really, really like low profile organizers, which has me especially excited about Milwaukee’s Packout organizer expansion.

There will be new low profile-style organizers in full-width and half-width sizes. 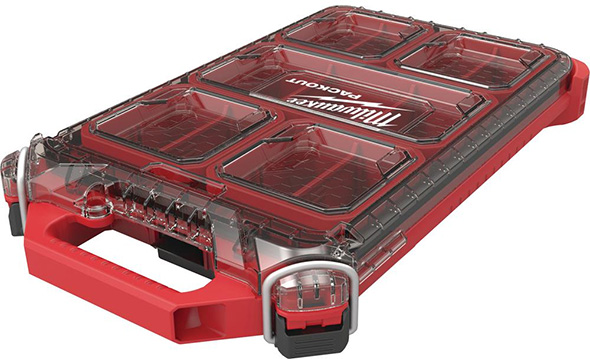 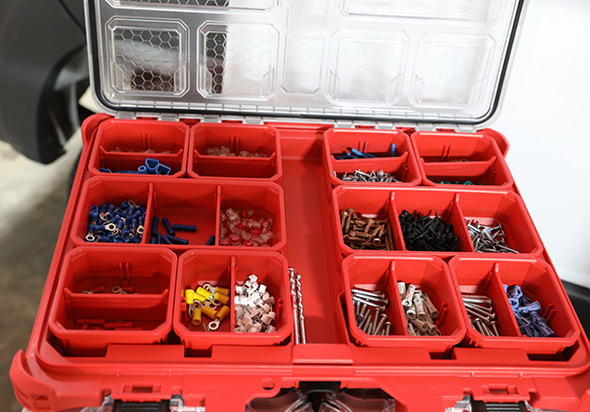 Inside, there are new bins, equipped with removable dividers. People were messing around with the bins all day, which is why the dividers are dislodged in some of them. 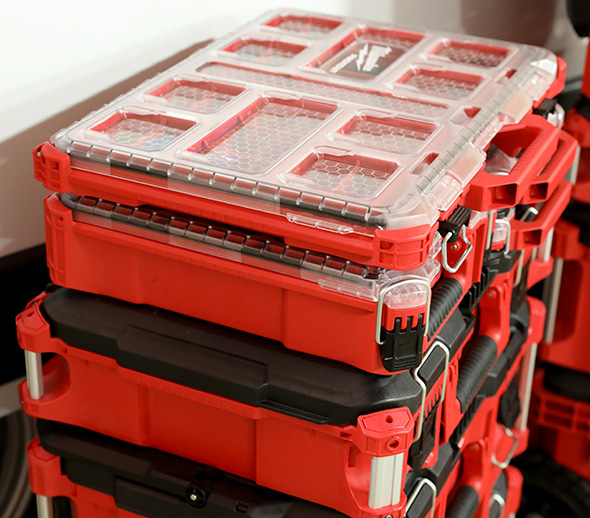 One thing to note is that the organizers are structured a little differently than the other Packout organizer and tool boxes. The latches appear to be a little smaller, and the handles are fixed, sticking outwards a little bit.

The full-width slim Packout organizer will be priced at $33, and the compact one will be $25, at least according to early listings. (Thank you to Mike for the links!)

The current expectation is that all of the Packout products will launch between September and December 2018. 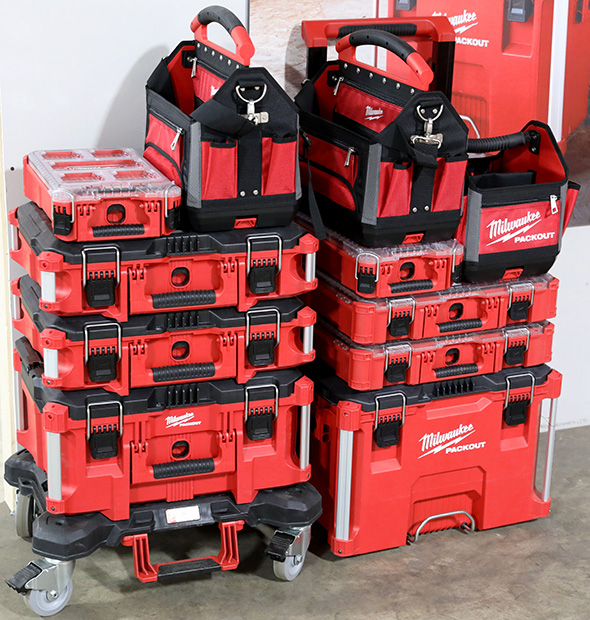 Here’s a look at the original Packout tool storage products, but with one new addition. Can you spot it? 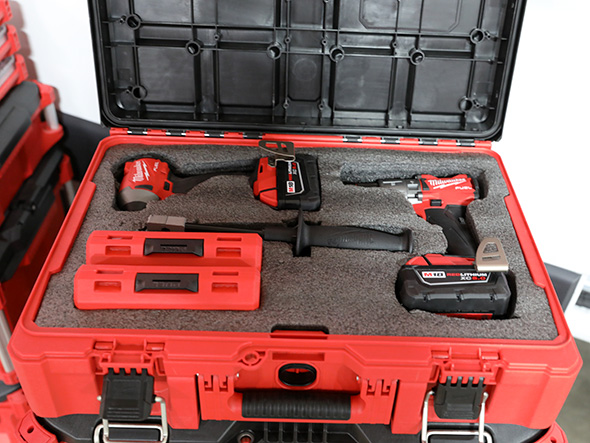 Also, a new Packout tool box case designed to hold a foam insert. The design is a little different, to maximize storage volume.

There’s also a new wall mount, which was shown off attached to a  wood stud wall, and the metal interior wall of a standard work van.

More on these new accessories another time. 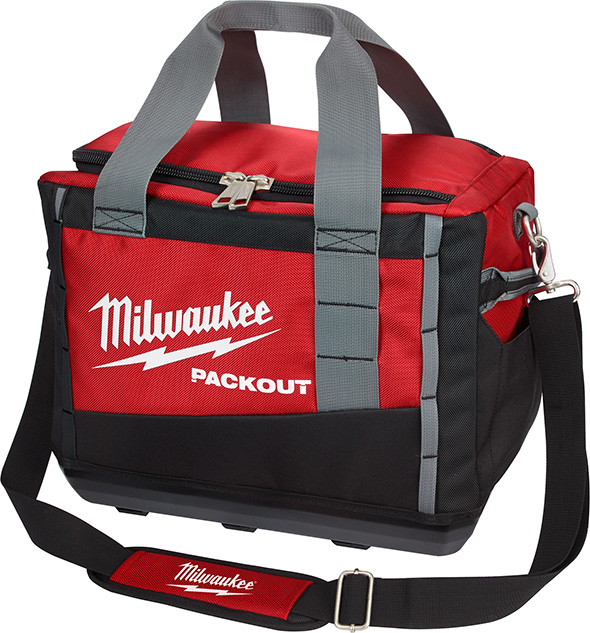 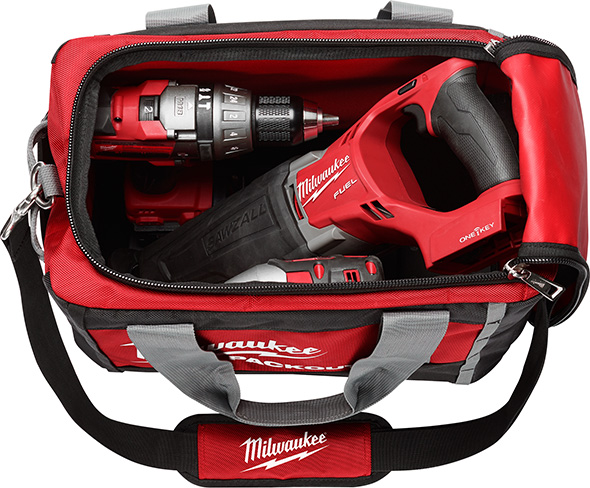 The 15″ Milwaukee Packout tool bag looks to be sized for holding a couple of cordless power tools, and maybe some boxes accessories. 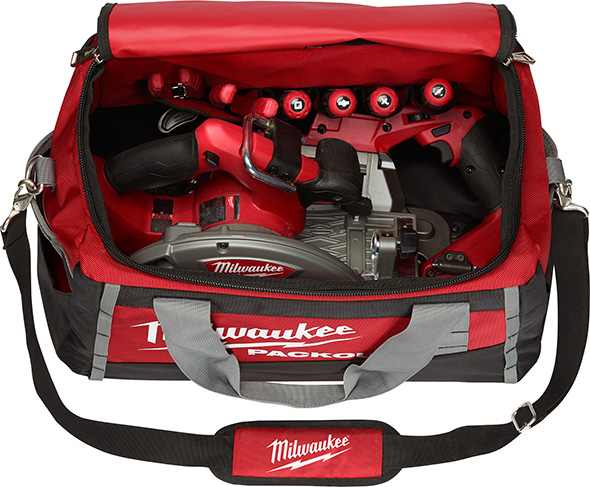 The 20″ Milwaukee Packout tool box has a little more organizational options, with pockets on the inside for holding hand tools.

Both have hard plastic bottoms, top handles, and shoulder straps.