ToolGuyd > Hand Tools > Pliers > Milwaukee PVC Pipe Pliers and Really Big Adjustable Pliers
If you buy something through our links, ToolGuyd might earn an affiliate commission.

Yesterday I wrote about Milwaukee’s new adjustable wrenches, and before that I posted about a lot of Milwaukee’s other new tools for 2015 and 2016. Today’s post will be shorter, and will look at two of Milwaukee’s specialty pliers.

Milwaukee came out with a whole slew of new pliers earlier this year, and I very briefly looked them over at the new tool media event. It looks like Milwaukee has brought a respectable number of pliers and locking pliers to their hand tool lineup. I wish I spent more time playing around with the new pliers, but we had to move to the next station before I could get around to it. 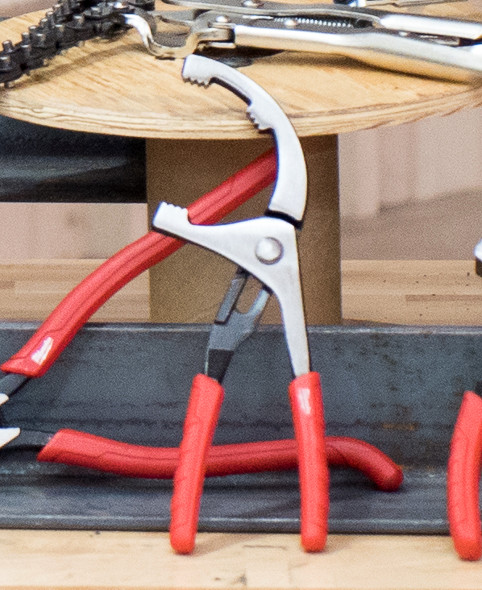 One of the interesting tools that I saw were these PVC pipe pliers. I don’t think they were mentioned at the event at all, and they didn’t really stand out until I looked over my photos from the event. Are these new? Current generation pliers? Last generation?

Am I even right in believing them to be PVC pipe pliers? They look like they could be oil filter pliers as well, but I don’t think Milwaukee designed them for such purposes, or to stand up to automotive fluids. So let’s just say they’re PVC pipe pliers.

The Milwaukee PVC pliers look like many of the other such tools on the market, such as Channellock’s 9-inch PVC pipe pliers ($16 via Amazon).

Maybe these aren’t new, or maybe there’s just not much to be said about it. Either way, it looks like Milwaukee’s got some PVC pipe pliers on the horizon. 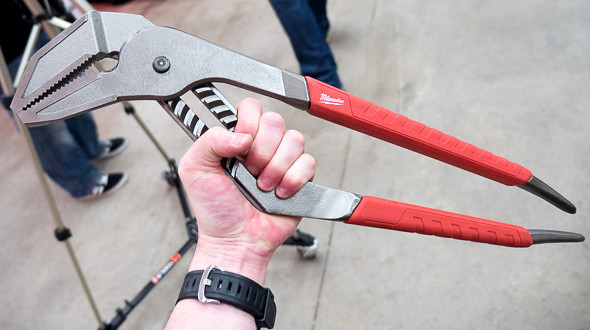 Another standout were the 20-inch straight jaw pliers. Yowzers, these are big pliers! They’re big and heavy, but other than requiring a two-handed grip, they adjust and work in the same way as smaller adjustable pliers.

I have used a huge adjustable wrench once – a 24-inch monstrosity that opened to about 2-1/2 inches. I used it to adjust a fastener or two on a Carver 25-ton hydraulic benchtop laboratory press, or something like that. It was a one-time thing, so maybe my memory is fuzzy – could have been a 30-ton press.

According to Milwaukee, these pliers can grip pipes up to 5-1/2″ wide. I can’t imagine that they’re comfortable to use, but it’s nice to see Milwaukee expanding their lineup with 16″ and 20″ models.

These are both somewhat specialty pliers. Would you have a place for either of them in your toolbox?