ToolGuyd > Power Tools > Cordless > Milwaukee M18 and M12 6-Port Rapid Charging Station
If you buy something through our links, ToolGuyd might earn an affiliate commission. 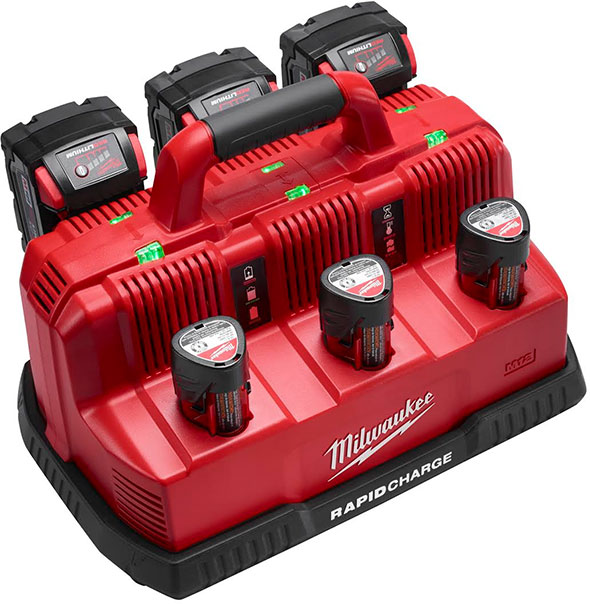 I reviewed Milwaukee’s Six Pack M18 battery charger when it first came out, and really liked its convenience. But despite its practicality, the Six Pack only charged batteries sequentially, meaning one at a time. Wouldn’t it be better if it could charge more than one battery at a time?

Others liked the idea of the M18 Six Pack, but a common desire kept popping up – where’s the M12 charging port?

Well, Milwaukee listened, and has come out with the new 48-59-1807 Rapid Charge Station.

AND… it can charge each battery FASTER. That’s where the Rapid part of the Rapid Charge Station comes into play.

Battery charge capacities are getting bigger, and so charging times are taking longer. With the new Milwaukee M18 and M12 Rapid Charge Station, individual packs can charge up to 40% faster!

Milwaukee says that the new charger can charge 1, 2, or 3 M18 XC battery packs in 37 minutes. On previous chargers, each battery would take 60 minutes to fully recharge.

We’re still waiting to hear back about the full charging times for more of Milwaukee’s current M18 and M12 battery packs. 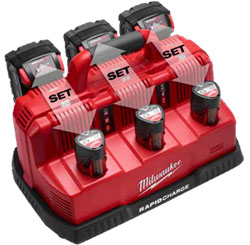 We asked Milwaukee about how the “charge up to 3 batteries simultaneously” functionality works.

Basically, this rapid charger has three separate charging systems that are split into “sets.” Each set consists of an M18 battery charging port, and an M12 port.

What this means is that you can charge any combination of 3 M18 and M12 batteries, as long as there’s just one battery per set of charging ports.

There are three things to keep in mind:

If you want to charge 2 or 3 batteries simultaneously, make sure you don’t plug any of them into the same set.

Here are the 3 main highlights about the new Milwaukee rapid charger:

I know what you must be thinking, because I’m thinking it too. When and where can I buy one?! The answer to that is next month for $169, presumably at all authorized Milwaukee dealers.

Milwaukee is calling this the fastest charging station in the industry, and that certainly seems to be the case. Bosch has also announced a rapid charger, along with a 6Ah battery pack, and it seems like other manufacturers might follow suit.

I think that Milwaukee’s M18 and M12 rapid charging station will be immensely popular with multi-battery users and at jobsites. Heck, it would probably be popular even if it was designed with just 2 out of the 3 main features.

Some users will probably now pine for an M18-only 6-port rapid charger, or maybe an M12-only 6-port charger. Those users who want 6 M18 or M12 charging ports might get what they want by buying two of these and daisy chaining them together. Remember, the power plug has a pass-thru connection, and so you only need one outlet for two rapid charger stations. And with two units, you have the ability to charge 6 batteries at once.

There’s somewhat of a waste if you don’t have need for M18 and M12 charging ports, but it seems unlikely that Milwaukee will come out with dedicated rapid chargers for both platforms.