ToolGuyd > Hand Tools > Mechanics' Tools > New Milwaukee Ratcheting Wrenches
If you buy something through our links, ToolGuyd might earn an affiliate commission. 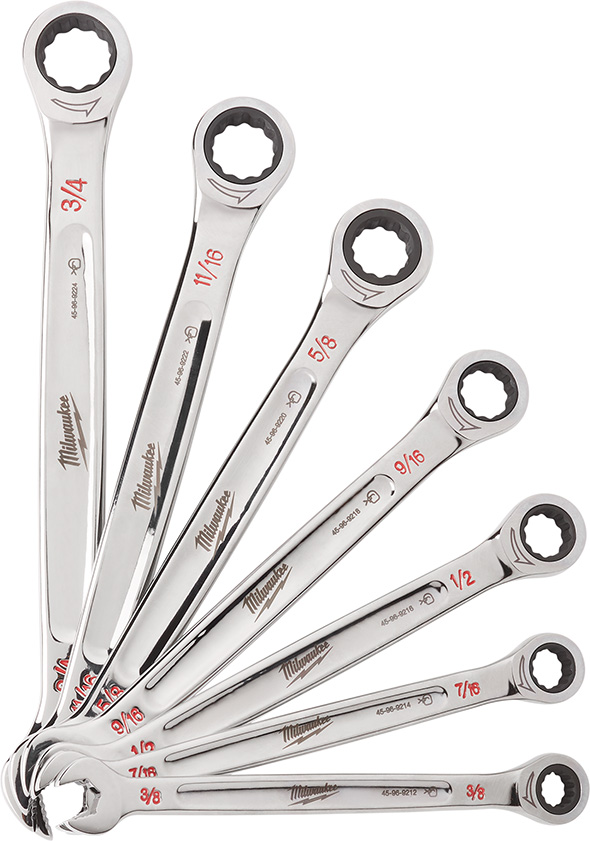 Are they my favorite wrenches? Not quite, but they’re darned good. I’ve been keeping the test samples in a Milwaukee tool chest, and the included trays make things very nice and tidy for storage and easy accessibility. 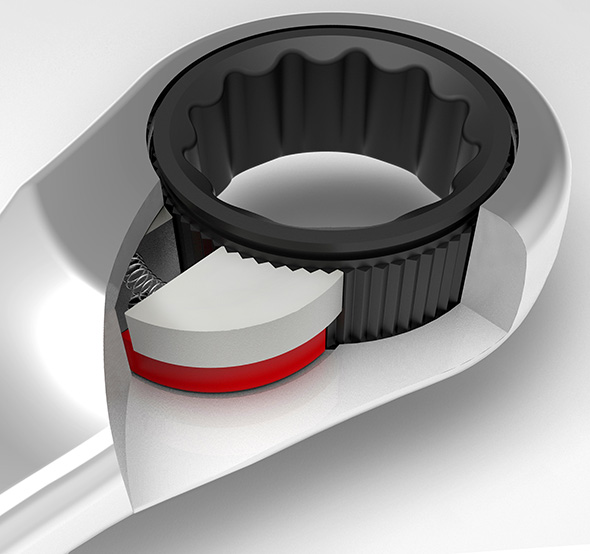 The 144-position ratcheting mechanism works by means of a double-stacked pawl, giving the wrench a minimal arc swing of 2.5°.

We’ve seen and used this kind of ratcheting mechanism design before, and it seems to work well. 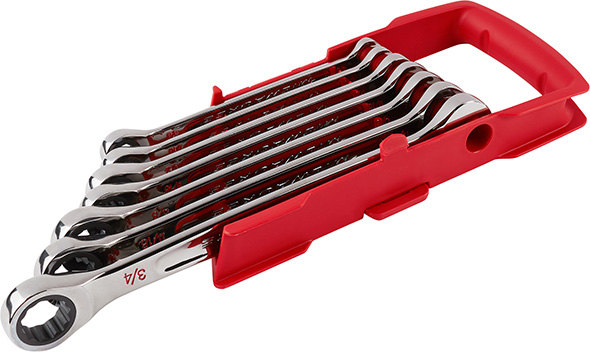 The new ratcheting wrenches will be available in 7pc and 15pc sets. The 7pc sets will come with handy portable organizers, and the 15pc sets will include trays to fit in a tool chest drawer. 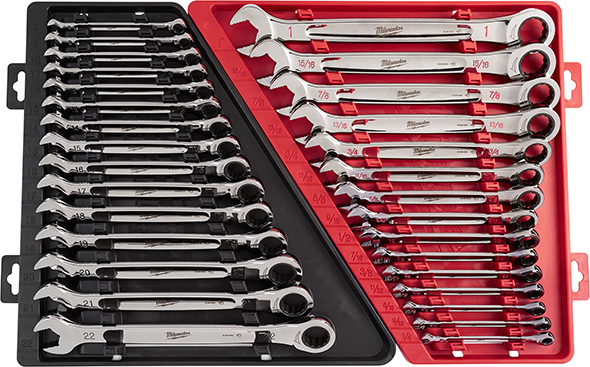 These trays are as convenient to store and access the wrenches as they look. It’s why I’ve been using Milwaukee combination wrenches pretty frequently – because the fit nicely in my tool box and without taking up much space. 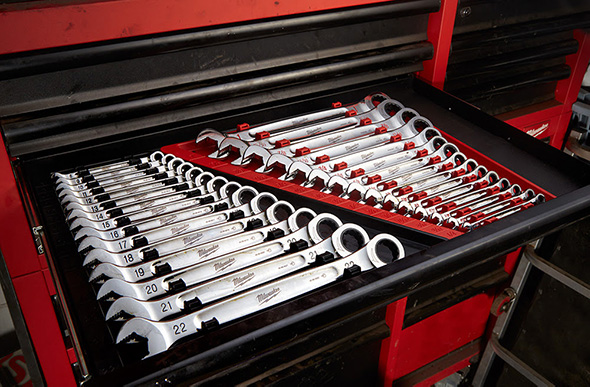 Here’s another photo, from Milwaukee. You don’t have to buy both sets, they are available separately, but if you do buy both, they sit together nicely.

I really like Milwaukee’s combination wrenches. They’re not my favorites, but they’re good, and I don’t have any good reasons not to like them. “They’re not mine,” seems to be biasing me a little.

I own Craftsman combination wrenches, as well as Williams, Gearwrench, Facom, Proto, and Armstrong. I also own Gearwrench and Proto ratcheting wrenches. I have also used Tekton wrenches, Dewalt wrenches, Kobalt, Husky, and a few other brands, through review sample access.

Milwaukee’s combination wrenches are comfortable to use, and while I haven’t measured anything yet, they seem to be precise, offering strong and secure fastener fitment. They’re a little shorter than some of my other wrenches, but that has yet to present any limitations.

There are pros and cons to both styles. Most of the time, I don’t need reversible ratcheting wrenches. And if you have standard non-ratcheting wrenches, you can use those in situations which could problematic or uncomfortable for zero-offset wrenches.

You really have to try both styles out to know what you want. There are tradeoffs.

I have not yet replaced my Gearwrench flex-head ratcheting wrenches yet, because they work well and I haven’t gotten into trouble with them yet. But they’re also not my go-to wrenches. I only reach for them when I’ve got a problem or task that they can better tackle.

While I want to express that these wrenches likely aren’t for me, I don’t have any hesitations about their quality. They are priced a little high, though. Personally, I’d buy a smaller Proto USA-made set of spline-end reversible ratcheting wrenches. That’s practically what I did – I bought individual sizes a few years ago, to cover most of the smaller hex nut and bolt sizes I tend to use most often. With the Proto set, there are limited set options, but you can also buy individual sizes, something you cannot (yet?) do with Milwaukee combination wrenches.

The question comes up every now and them, if one should buy ratcheting wrenches as their only wrenches. I would not want any of these sets as my only wrenches, but they would make great complements to standard combination wrenches. A standard combo wrench has a 15° box end offset, which can make it more comfortable to use in a lot of situations.

Now look at Milwaukee’s inch set. Ratcheting wrenches are a little bulkier in the box end, and there are times when a wrench is just a hair too big to fit.

Long story short, I am optimistic, based on what I’ve seen with their non-ratcheting wrenches.

But for users that haven’t yet tried non-offset wrenches, I’d encourage you to find a way to try them out first before splurging on brand new wrench sets. There’s less risk if you already have a good set of combo wrenches.

I don’t want you to think that I’m extraordinarily hesitant about these wrenches, because I’m not. Part of the reason for the direction of this discussion is my unfavorable stance towards non-offset ratcheting wrenches, and the other part stems from all the “WHOA AWESOME, BUY ‘EM!” opinions I’m seeing elsewhere. I haven’t seen any other tool preview, social media post, or other recent mention, where someone says “just keep in mind that these are flat-style wrenches with no reversing switch.”

These wrenches can still ratchet in both directions. But instead of flipping a switch, you turn the wrench over. That’s what the arrows on the box ends are for – they tell you the “torque” direction.