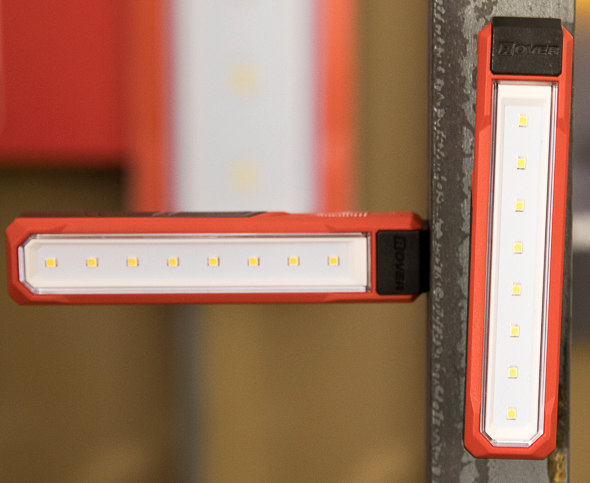 I have found that there are 3 types of opinions towards Milwaukee’s line of RedLithium USB rechargeable LED flashlights and worklights.

First, there are the users that own and LOVE their rechargeable Milwaukee flashlights.

Then, there are potential users who are open to trying them out, but aren’t quite ready to open their wallets yet.

Finally, there are some people who haven’t bought one yet, objecting to the use of proprietary Li-ion batteries.

To help out the second group of people, those who might need a push off the fence, here are 5 reasons why you NEED a Milwaukee RedLithium USB flashlight or worklight. If you’re still not convinced, then maybe they aren’t for you after all, and that’s okay. 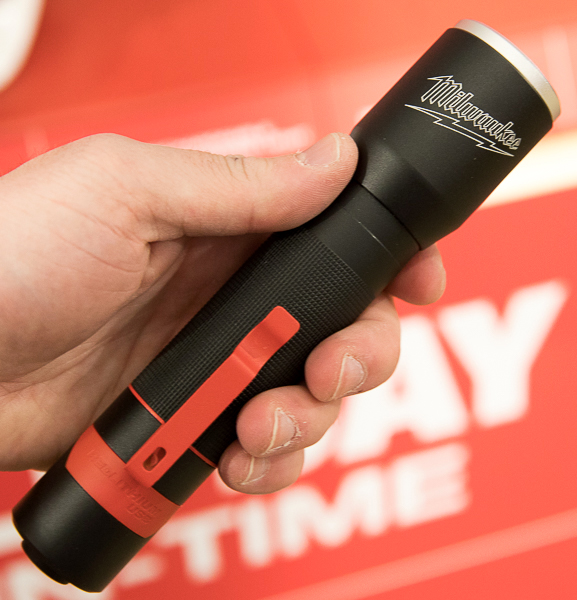 There’s a flashlight. It’s am little chunky, but durable and bright. 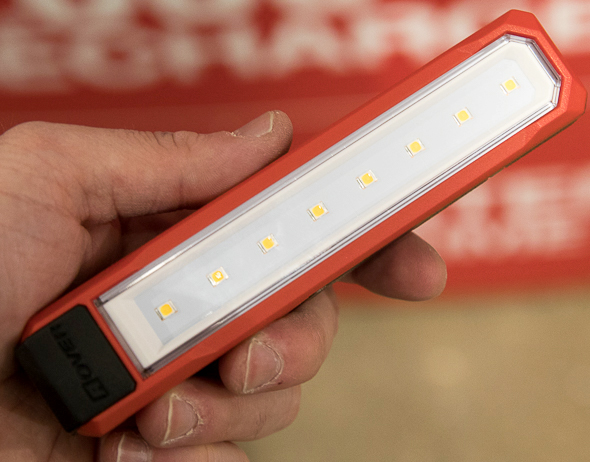 This is the Rover “pocket flood light,”which is probably going to be the most versatile “starter” light for many users. If you start with this one, look for model no. 2112-21.

The rear magnet isn’t as strong as I’d like, but the base magnet is. You won’t notice anything on thicker or bare steel surfaces, but it’ll slide a little on thinner or thin and coated steel surfaces. Milwaukee increased the magnetic strength on their smaller and lighter alkaline-powered light. I use both, sometimes for different things and sometimes interchangeably.

You know, I thought I’d like the alkaline-powered Rover light better, but I don’t, partially because you can’t use it with rechargeable NiMH cells without losing the brighter setting. The RedLithium USB system has grown on me. 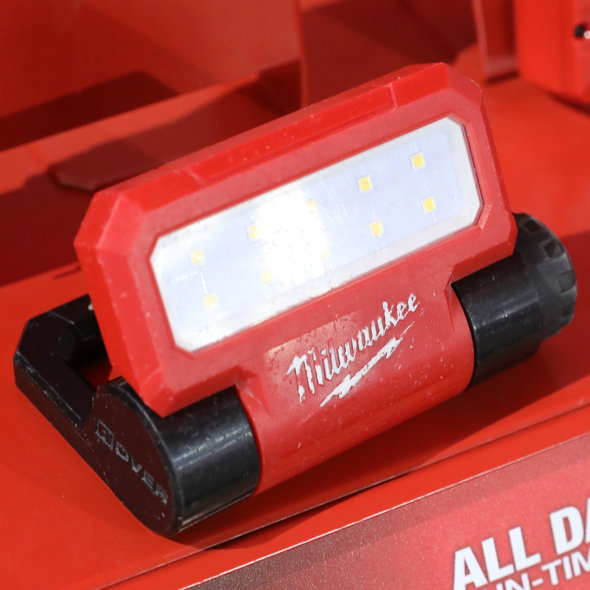 There’s a pivoting LED worklight as well. This one was a prototype at an NPS show, and so that’s why it’s more beat up than a production model. 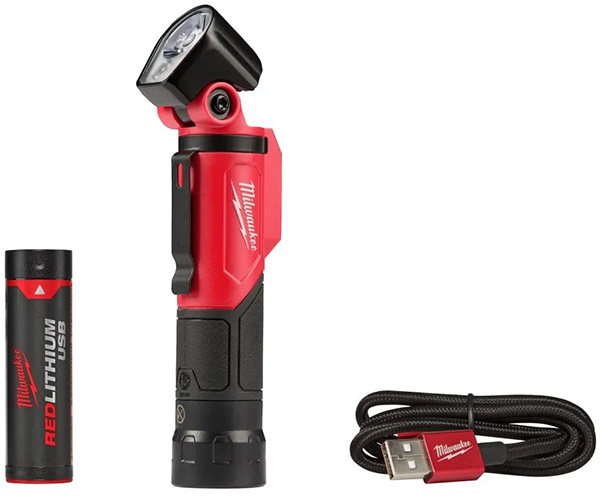 Finally, Milwaukee also offers a pivoting-head LED flashlight with pocket clip and magnetic base. This one is a little pricier than the others, but offers selectable flood and spot light modes. 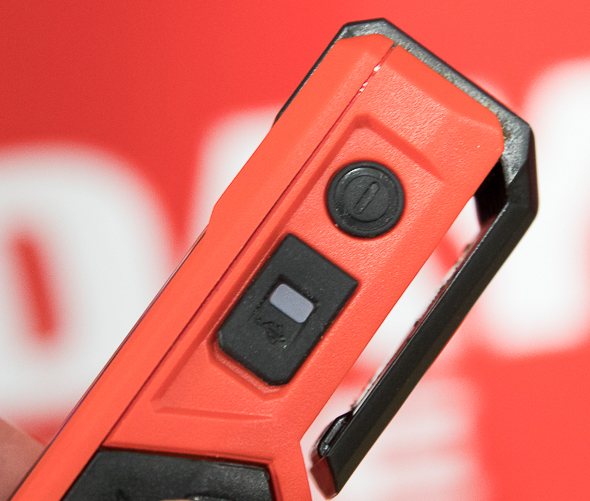 Each Milwaukee RedLithium USB flashlight or worklight has a built-in USB (micro) charging port, so that you can have it fully charged for use with minimal add-ons or accessories. 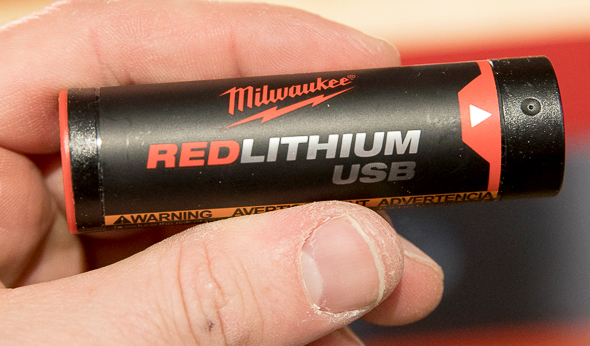 But, you can also recharge the batteries separately. This way, you can pop in a fresh battery and have the worklight up and running in seconds, rather than having to charge the battery inside the flashlight.

Yes, I know some would-be users would prefer standard 18650-sized Li-ion cells, but this way of doing things – using a proprietary battery – provides for more predictable performance and easier sourcing.

I’ve used mine a LOT. My Milwaukee-provided samples are sometimes used handheld, and other times they’re secured to magnetic surfaces.

When we had warranty service on our refrigerator, the tech had a RedLithium USB Rover.

An HVAC tech was here on two occasions, and both times his cordless worklight, which looked like some kind of small battery-powered halogen light, ran out of juice. “Here you go,” and my RedLithium Rover lit up the scene.

When another tech arrived to replace the heat exchanger gaskets, he had a beat-up but reliable Milwaukee M18 worklight. I showed him my selection of RedLithium USB flashlights anyway, and his eyes lit up.

I know that some of you have had great experiences with these flashlights and worklights (and headlamps), but it was the recent HVAC tech visits that really drove home a “Milwaukee is killing it with these products” mindset.

One of the tech’s halogen-styled cordless light was temperamental and its built-in battery ran out unexpectedly. The other tech’s M18 worklight looked much-loved, and it did the trick. But it seemed to me that they might have benefited from a worklight that they could carry up a ladder or down narrow basement stairs in a pocket.

In general, I don’t like built-in Li-ion batteries. The ability to replace worn batteries is a plus, and I like that I can charge the batteries either in the tools or in a separate charger.

I was a little hesitant about how useful these flashlights would work out for me, but I’ve been using them more and more. At this time, I really really like them, and for different types of applications.

The RedLithium USB lineup has been coming together, a little more so with each year’s new releases. I’d be willing to bet that there are some more tools on Milwaukee’s roadmap, but I wouldn’t say no to more lighting solutions. They’ve been getting it right so far.

I’d like to hear more about your experiences with these products. I haven’t seen many “in the wild yet,” but these products are also much smaller and easier to stash away than other Milwaukee innovations such as Packout tool boxes.

If you haven’t tried Milwaukee’s RedLithium USB LED flashlights or worklights yet, what are you waiting for?

Even the least expensive Milwaukee RedLithium USB flashlight will sting your wallet a little more than with your previous flashlight and worklight purchases, but there are occasional bonus deals or promos to help soften the cost.

The flashlight and worklight kits start at ~$60.

Acme Tools’ pivoting flood light promo kit is an example of a special bundle. You get a charger and spare battery for about the same price as the regular kit. In this case, I’d opt for the standard kit, as it’s eligible for Milwaukee’s rebate, which gets you the USB power source charger instead of the “standard” one. 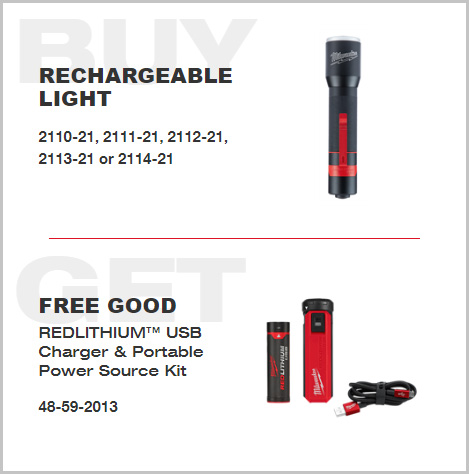 Right now, Milwaukee has a rebate offer – purchase a rechargeable light, fill out the form, and you get a free RedLithium USB charger and portable power source kit by mail, including a spare battery. The bonus kit (48-59-2013) is valued at ~$50.

HVAC tech almost didn’t believe me that this @milwaukeetool RedLithium USB charger can also give your smartphone a battery boost, but it can. While I was at it I showed him the range of RedLithium USB magnetic work lights and he was practically drooling. Can’t blame him, they’re awesome lights. #tools #milwaukee #cordless #cordlesstools #contractor #diyer