ToolGuyd > Hand Tools > Knives > Milwaukee Slide-Out Utility Knife (Quick Review)
If you buy something through our links, ToolGuyd might earn an affiliate commission. 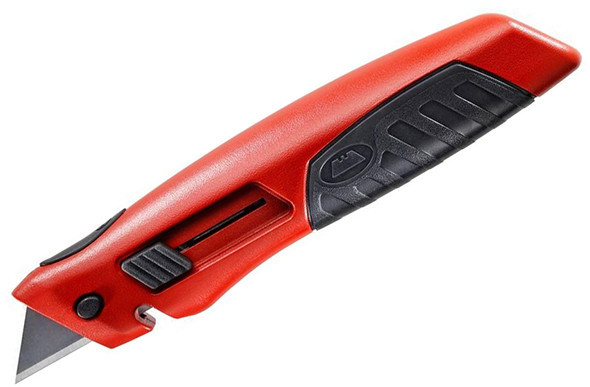 This Milwaukee slide-out utility knife, 48-22-1910, sees a lot of use in my house. I tend to use it for opening new boxes and packages, and my wife seems comfortable using it too. I believe it’s the only utility knife she’ll touch.

Despite its somewhat chunky dimensions and non-folding design, it fits in my pocket nicely.

I like the blade sliding mechanism, which is on the side of the knife, rather than the top. Maybe Milwaukee will someday come out with a lefty version.

The rubbery handle grip, covering the blade change compartment, is getting a bit chewed up on, so I’ll likely buy a replacement and take the current one for workshop use.

There are 3 cutting depth positions, and of course a 4th fully retracted setting.

I don’t use the cutting slot, but it’s nice to know it’s there. It doesn’t get in my way.

There’s not much else that needs to be said. It performs its duties quite well, and is almost a pleasure to use.

I don’t use this Milwaukee utility knife exclusively, but imagine that I could, for at least all the times I don’t need a more compact folding knife.

There’s not much I would want to improve. The blade storage compartment is grasped and pulled to open. Maybe it could be a little more secure? But I haven’t had a problem with it yet.

I’d also like to see an ergo-shaped or angled option, similar to some of Dewalt’s utility knives. I’ve rubbed some paint off the front of the knife, but not a lot, so this isn’t a huge deal. Maybe it would help with cutting through difficult materials or unusually thick or tough cardboard.

This is a good utility knife at a great price.

I bought this with a screwdriver as part of a Father’s Day or winter holiday promo bundle at Home Depot. Maybe it was 2 tools for $15? I’d buy more without any hesitation.

It lives in a kitchen cabinet, but sometimes follows me around the house or into the workshop in a pocket.

I tend to buy new or unfamiliar utility knives, just to try out. This is one of few times that a utility knife impulse buy became a permanent addition to my toolbox. Well, figurative toolbox.