ToolGuyd > Power Tools > Cordless > New Milwaukee “7.8KP” Thermal Imaging Camera
If you buy something through our links, ToolGuyd might earn an affiliate commission.

Learn More: What’s the difference between a thermal imaging camera and an imaging thermometer? 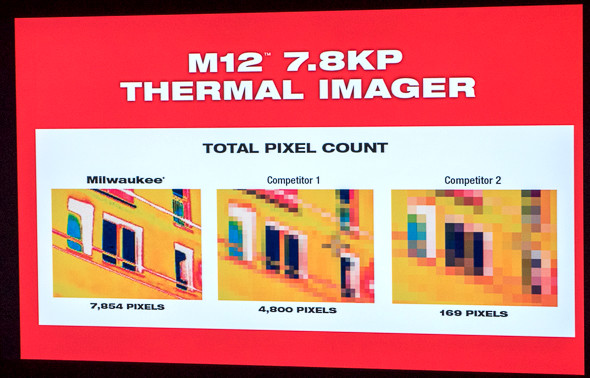 In their promo poster, Milwaukee compared the resolving power of the new M12 thermal imaging camera to competing models which have lower pixel arrays – 80 x 60 and I guess one that has a 13 x 13 resolution.

Many entry-level models have 80 x 60 px sensors, such as the [modifiable] Flir E4, which I own, the pocketable Flir C2, which I am currently testing, and the new Fluke TiS10. Bosch also has an 80 x 60 px thermal imaging camera coming to market, but thus far it has only been announced for the European market.

Dewalt, Fluke, and Flir all offer visual thermometers and imaging thermometers, which typically offer very low resolution thermal imaging sensors. Those products are more intended for guidance purposes, so that there’s some context when taking a temperature reading.

Catch up: Here is all of our Milwaukee new tool coverage from the event!

The samples that we tested at the event were loaded with basic functionality software, and so we’ll have to wait until production models are out before we have a good sense of the imager’s capabilities.

The demo units were speedy to use, and I liked the small size, which makes them much more “point and shoot” capable than Milwaukee’s better featured M12 thermal imaging camera.

Flir’s pocketable C2 is currently $699 (via Amazon), but I think that Flir and Fluke’s other traditional models might be more reasonable to look at for forming a reasonable pricing analysis.

As mentioned, I bought an early Flir E4 and uploaded user-generated firmware update to unlock the full potential of its thermal imaging sensor. If you look at my comparison of “before” and “after” images, images from the new Milwaukee M12 thermal imaging camera should look slightly better than the “before” images, and of course without the Flir MSX contrast.

I am glad to see Milwaukee broaden their thermal imaging lineup, and am optimistic about the new model. The big brother model is quite decent too, and even though Milwaukee hasn’t lowered the price since it launched, it remains competitive.