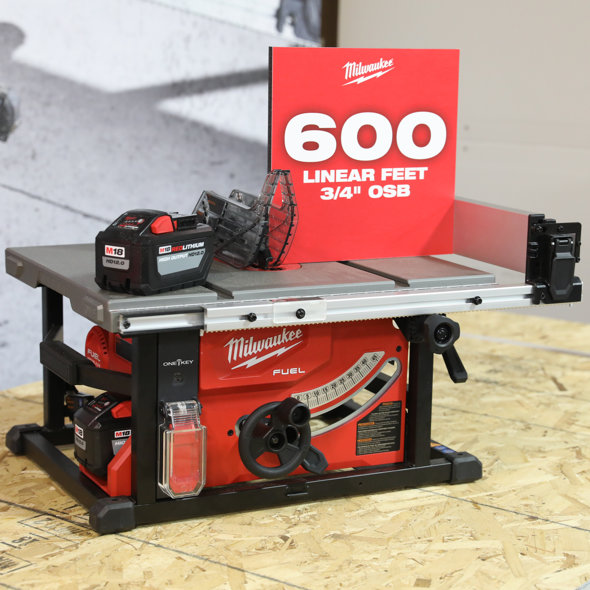 I talked about the hottest new tools from the Milwaukee Tools New Product Symposium last week, and one of the big stars was the new M18 Fuel 8-1/4″ table saw with One-Key. Milwaukee claims it’s the world’s first 18V table saw and I can’t think of an example to the contrary. The closest competitor I can think of is the Metabo 2x18V (36V) table saw.

In this post I’m going to go over every detail about the new cordless table saw we know so far. First off here are the relevant specs: 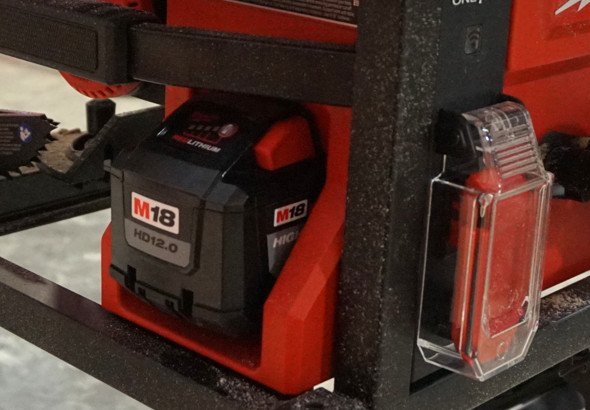 This table saw was designed to take advantage of Milwaukee’s new M18 HD12.0 battery. Couple this high output battery with a newly designed brushless motor, and you have a machine that can easily rip 2x material at 45°.

But output power is just one aspect of the new high output batteries, they also offer longer runtime compared to Milwaukee’s other M18 batteries. For the table saw, this translates into ripping up to 600 feet of 3/4″ OSB on a single charge.

When the cut is finished and the saw is turned off, the electronic blade brake quickly stops the blade in almost a second.

The dado insert plate will be sold as a separate accessory. 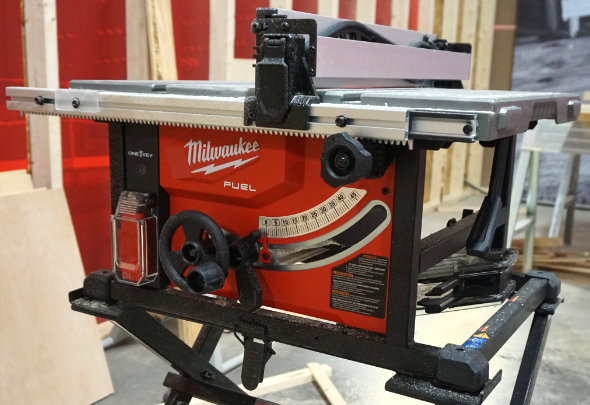 The saw has a large paddle switch, encased by a cover that needs to be lifted before the paddle can be pulled up to turn on the saw. The large cover and paddle make it easy to locate the switch, which can be turned off my simply bumping it.

The bevel angle adjustment is pretty standard for a contractor saw. A simple locking lever allows you to tilt the blade when released and locks in the bevel angle when engaged. There’s a single bevel angle stop at 0°, and the blade can be tilted to up to 47°. 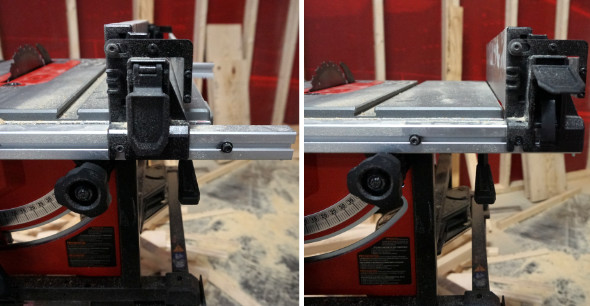 This might seem a bit cumbersome, but it is a compromise between  having a larger rip capacity and making sure the fence rails are completely inside the area of the table for storage. This really isn’t that big of a deal though, as moving the fence just requires unlatching a lever in the front and back of the fence

You might also notice that there are T-miter slots on both the left and right side of the blade. These type of miter slots prevent the miter gauge from rocking out of the slot as you slide it through the cut. Several competing contractor saws don’t have T-miter slots, and so this is a nice touch.

The flip-over fence has two positions. In the first position, the lip rests on top of the table this is for ripping thin strips where you don’t want the bulk of the fence close to the blade. In the second position, the lip is at the same level as the table, for supporting sheet goods that are wider than the table. 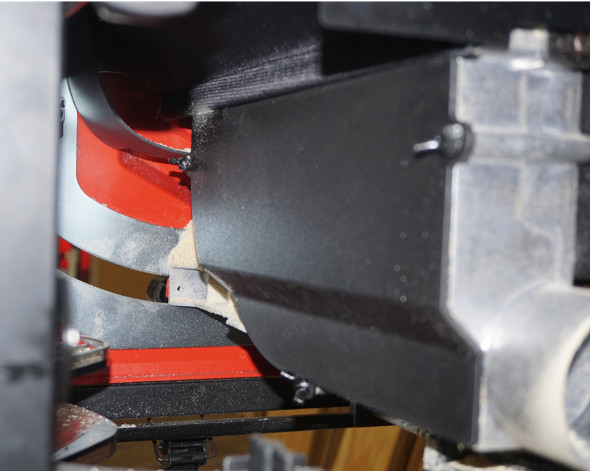 While there is no dust collection on the guard, the entire blade cavity is enclosed to aid in dust collection through a 2-1/2″ dust port. You can even see the fabric connecting to the bottom of the table to help prevent dust leaking out. 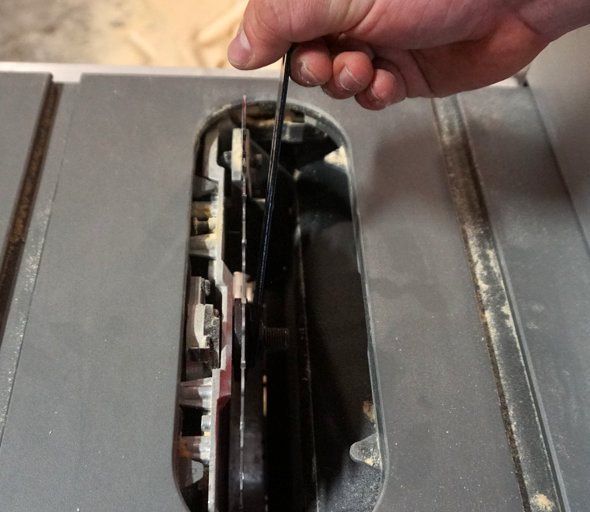 To change the blade on the table saw requires only one wrench. There’s an arbor lock under all that sawdust on the left of the blade.

Removing and replacing the riving knife and blade guard is made easy by a tool-less lever release. You can see the lever in the photo below, it is above and to the right of the dust port. 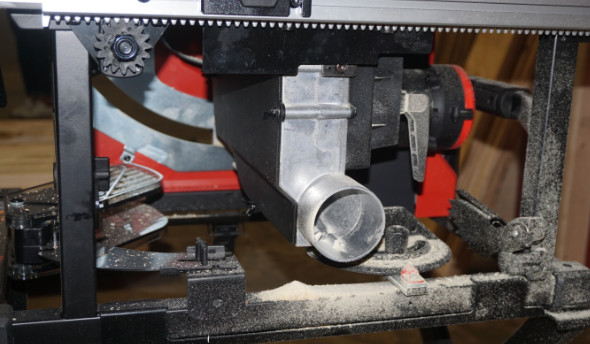 In the photo above you can see the miter gauge, blade guard, and anti-kickback pawls all stored neatly under the saw. 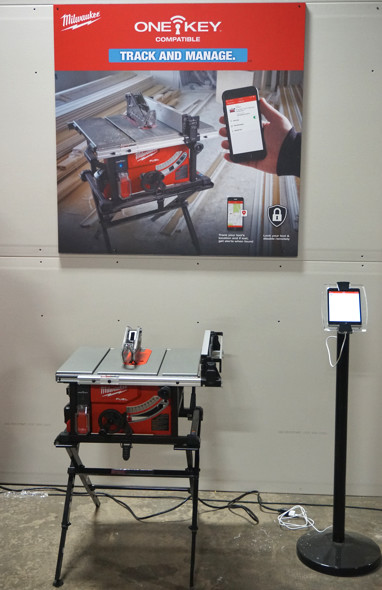 Finally, the saw will ship with One-Key for tracking the last location of the saw and locking out non-authorized personnel.

Milwaukee mentioned that the runtime will allow the saw to make up to 600 ft of 3/4″ OSB. They said this was the equivalent of ripping 2 full bunks of OSB in half. A bunk is one of the the units wood is shipped in, usually corresponding to a standard dimension for packing shipping trucks. Anyway, a bunk of 3/4″ plywood is about 40 to 44 sheets and so a bunk of OSB should be similar.

Still the point is somewhat valid, if you buy your plywood by the bunk then 2 bunks is a good visual representation of how much work you’ll get off one HD12.0 battery.

Speaking of the HD12.0 battery, does Milwaukee have something bigger in the works, or are they just trying to future-proof their M18 platform? If you look at the photo of the battery again you can see there’s more room for expansion. Well maybe you can’t see because of the dark photo, but there is extra room around the HD12.0 battery in the battery compartment.

Stuart’s Note: I saw something similar with the new M18 chainsaw, and was told that there’s a simple explanation, but one that they couldn’t discuss at the time. Maybe it’s to fit an M18 battery OneKey adapter?

We embedded this video before, but I wanted to talk more about it now. After the first cut, notice how long it takes for the blade to spin down after he turns off the saw. Without going back and looking at it frame by frame, I’d say that it’s about one second from the time he hits the power switch and the blade is completely stopped.

Now think about how long you had to wait for the blade to spin down last time you turned off your table saw. I was just making some cuts the other day and remember having to wait seemingly forever for the blade to stop so I could clear some waste away from the blade. Having a blade brake not only seems like a good safety feature, but a time saver.

In the first part you see the saw running on an HD 12.0 pack and then he switches out to a 5Ah pack. The new 12Ah pack not only gives you more run time, but Milwaukee claims that it can provide up to 50% more power than the HD 9.0 battery they introduced a few years ago. This is due to the larger 21700 cells and other tweaks made to the pack.

It maybe would have been more interesting to pit the HD 9.0 vs the HD 12.0, comparing the (15) 18650 cells against (15) 21700 cells, to isolate the performance difference between the types of cells. At the time, we were trying to show how the saw would perform with users’ existing M18 batteries.

Of all the tools to put One-Key on, why a table saw we wondered? The way Milwaukee explained it, a table saw is a tool that requires more training and experience to use properly and it is usually a larger tool you leave on site, and so the lock-out feature can help prevent the liability of untrained workers improperly using the table saw and hurting themselves.

They also brought up the humorous example of a drywall contractor seeing an unattended table saw and using it to rip down drywall. I’m not sure if that’s something that happened in real life or not.

Stuart’s Note: In a separate discussion, I was told that many users treat table saws as a bigger investment than say a cordless drill or other handheld power tool. So for such a tool, One-Key made sense for the lock-out feature, but also for tracking purposes. Whereas users might be hesitant to see One-Key automatically integrated on less expensive tools, it’s likely going to be more welcome on equipment of this type.

The last thing I wanted to mention was a safety aspect of the saw that took me by surprise. Several times, as I was playing with the saw, removing the throat plate, taking photos, etc., and the Milwaukee product manager would come running to pull the battery out of the saw.

It’s not that I wasn’t being safe in my own mind. I’m usually very mindful about unplugging my table saw after I make a cut or go near the blade, but not seeing a cord plugged in, I instinctively thought I was safe. It’s going to take a little getting used to — taking out the battery out after using the saw.