ToolGuyd > Power Tools > Power Tool Accessories > How it’s Made (in the USA): Milwaukee Carbide-Toothed Sawzall AX Blade
If you buy something through our links, ToolGuyd might earn an affiliate commission.

In my first Milwaukee USA factory tour post, I talked about how a typical Milwaukee Sawzall reciprocating saw blade is made. In this post, I will show how a Sawzall AX blade with Carbide Teeth is made.

If you recall from the last post, the first steps in the process for making a Sawzall blade goes something like this:

Milwaukee Tools emphasized the benefits of their typical Sawzall blade manufacturing process, and how the blades are stamped out before the teeth are milled. Well, in making the AX with carbide teeth they don’t follow this process. They make the teeth before they cut out the blade.

The carbide welding and grinding process is done in an enclosed section of the factory that has access control. They don’t show this section to every visitor and when they let us in we were only permitted to take photos of one very specific process.

But before we get to the process for making the carbide-toothed AX blade, we need to understand a little bit about why Milwaukee welds the carbide onto the blade in a certain way.

How Carbide Sawzall Teeth are Different

Milwaukee wanted to point out that the technology for adding carbide teeth to a circular saw blade doesn’t translate well to a Sawzall blade. Each type of blade has different requirements.

A carbide is a combination of carbon and another element in a specific ratio. To adjust the wear resistance and the “fracture toughness” they adjust the binder content and control the grain size.

On circular saw blades, the teeth are usually brazed on with a third metal (sometimes more) that provides a cushion for the carbide tooth. Above you can see the additional metal behind the tooth on the Diablo blade in my table saw. Of course you can always find exceptions, like Irwin’s WeldTec circular saw blades where the carbide teeth are welded directly to the blade.

On a Sawzall blade, the carbide needs a solid weld joint to survive the stresses. Milwaukee uses fusion welding which forms an electromechanical bond between the two metals.

When Milwaukee talks about “carbide” they are specifically talking about tungsten carbide. The only other information they gave us about the formulation was that one of the binders they use is cobalt. The carbide segments they use are tiny, only 3 mm long.

Here’s the process Milwaukee showed us for making the AX with Carbide Teeth blade:

Before we get into the process, the carbide tipped blades do not use bi-metal stock, as they don’t need a second hardened metal – the tungsten carbide does that job. They did not go into detail or show us that part of the process, but they said they grind the partial tooth form, the same profile that is on the bi-metal AX blade, into the long strip of metal before this part of the process

In the first part of the process, they unwind the toothed backer from the spool and they clean it to remove any contaminants to ensure a good weld joint.

Once the blade is prepared, a vibratory feed bowl orients the tiny 3mm long carbide segments correctly. From there the segments go into a long metal channel. A shuttle mechanism then transfers the segment to the electrode. 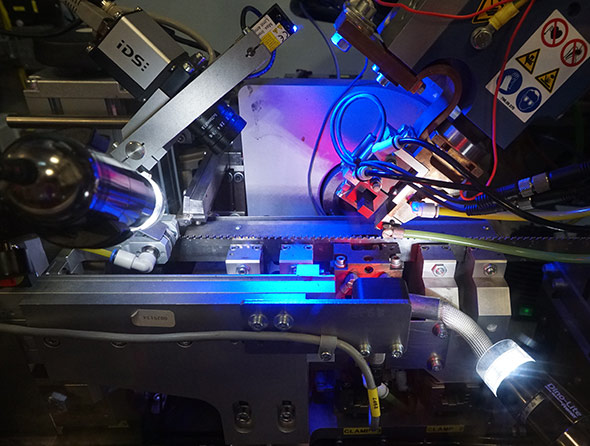 The electrode holds on to the segment by using a vacuum while the machine vision system positions the band. As the electrode touches the backer, the weld is completed. In the above photo you can see both the camera and lights for the vision system. 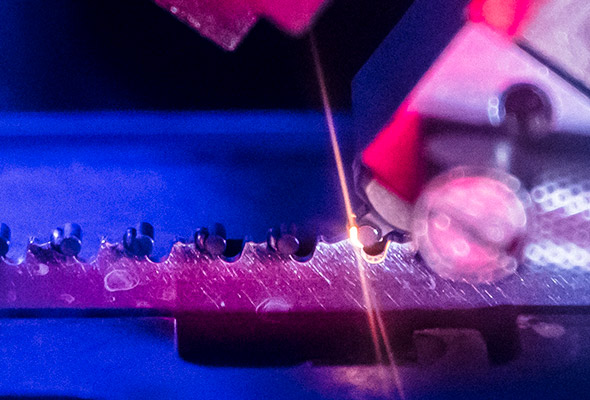 In the closeup photo above you can see the actual weld happening. You can also see the shape and size of the carbide segments. They are so much longer than the blade is wide because that’s about as small as they can reliably handle the segments. In the next step, two horizontally opposed diamond grinding wheels will grind them down the width of the blade (0.50 to 0.55 mm ). 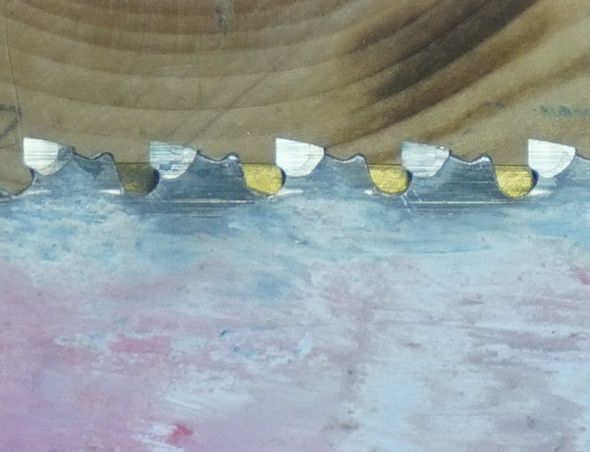 Because tungsten carbide is so hard, Milwaukee can only use a diamond or synthetic diamond wheel to shape the teeth. They didn’t let us photograph the side grinding step, but in the above photo of a used Sawzall blade you can still see the where the round carbide cylinder was welded to the tooth and ground to width. You can also see the later top grind step (rake and relief), that defines the shape of the tooth.

Once the long continuous-length carbide blade has been respooled, it is brought over to the High Flex Fabrication area where the blade is blanked from the roll and the top grind is done.

To do the top grind they stack the blade blanks together and do a single pass along all of them rather than trying to grind each individual tooth. Once the top grind is done the blades go to heat treating and the rest of the manufacturing steps are the same as any other Sawzall blade. 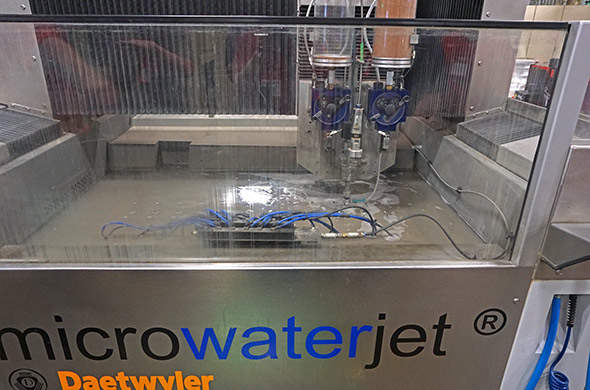 The High Flex fabrication can run two different blades at the same time. For instance they were running 9″ AX with carbide teeth on the first line and on the water jet they were cutting teeth for flush cut blades.

While the water jet wasn’t being used for the Ax with carbide teeth, it is still a really cool piece of equipment to show you. The water jet cuts metal with a mixture of water and media pressurized to 60,000 psi. In the video, the water jet is cutting out the tooth profile in a blank flush cut blade. When the water jet finishes cutting the teeth, the blade then goes to the setter.

To show you how precise it can be, here is a flush-cutting blade that has been cut out on the water jet.

Up Next: The Hole Dozer Hole Saws

Rather than try to shoehorn manufacturing the Hole Dozer hole saws into this post, we’ll save them for the next post. There are some very cool processes involved there, such as how each hole saw is formed and welded from flat material.

See Also: Milwaukee USA Factory Tour: How a Typical Sawzall Blade is Made