ToolGuyd > Power Tools > Power Tool Accessories > Milwaukee USA Factory Tour: How a Typical Sawzall Blade is Made
If you buy something through our links, ToolGuyd might earn an affiliate commission. 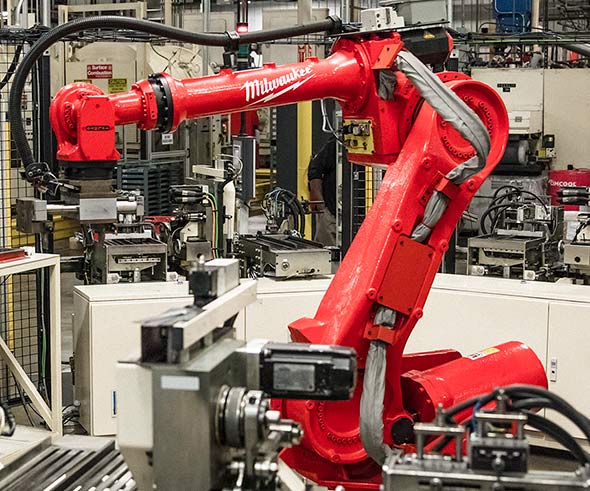 I recently had the opportunity to tour Milwaukee Tool’s Greenwood, Mississippi manufacturing facility, where they produce Sawzall blades and hole saws.

Milwaukee Tool invited ToolGuyd and several other tool industry media to visit their Mississippi facility. For the sake of transparency, I’d like to remind you that media event hosts often cover airfare, hotel accommodations, food, and in some cases entertainment. This trip was no different.

Although some might not find it very exciting to learn about how cutting accessories are manufactured, there are still several interesting processes going on here.

The Greenwood plant has been open since 2001 and has undergone expansion in the past few years. Their total space now sits at 390,000 square feet and they employ 670 people. To put the number of Sawzall blades they’ve made since 1999 in perspective, they gave the example that they could fill the square footage of the Empire State building 9 times with blades. 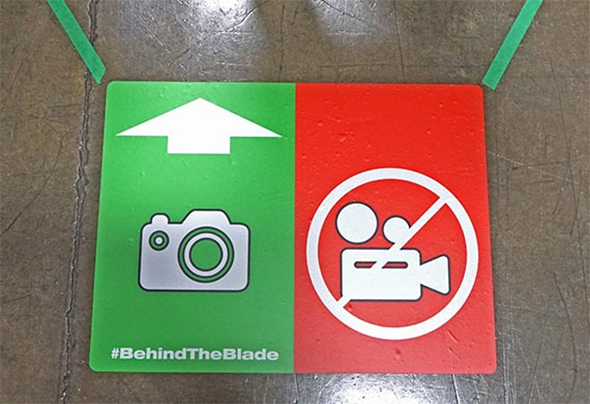 While we were able to see most of the current manufacturing floor, photos and video coverage could only be taken or recorded at predesignated areas. Even though it sounds stringent, they allowed us to take photos of other things, but they wanted us to ask for permission first.

We were told the biggest concern was that they didn’t want the competition to see their manufacturing capacity, so they wanted to prevent wide angle shots of the factory floor. When I pushed them on this further, saying that you can see how big their buildings are in an aerial photo, they said that it isn’t just about the amount of manufacturing area you have, it’s how efficiently you use the space.

Stuart’s Note: I’d think there’s more to it. If I operated a factory, in addition to keeping capabilities and capacities private, I would seek to protect the “how” and “why” my products were manufactured a certain way. Still, some factories prohibit photos or videos at all, so we’re grateful we’re able to share a glimpse of what Ben saw and experienced on the tour.

There were also areas that were off limits; most of the second building was completely cordoned off. They hinted that they were working on manufacturing some new products at the plant.

See Also: How a Sawzall Blade with Carbide Teeth is Made

How Sawzall Blades are Made 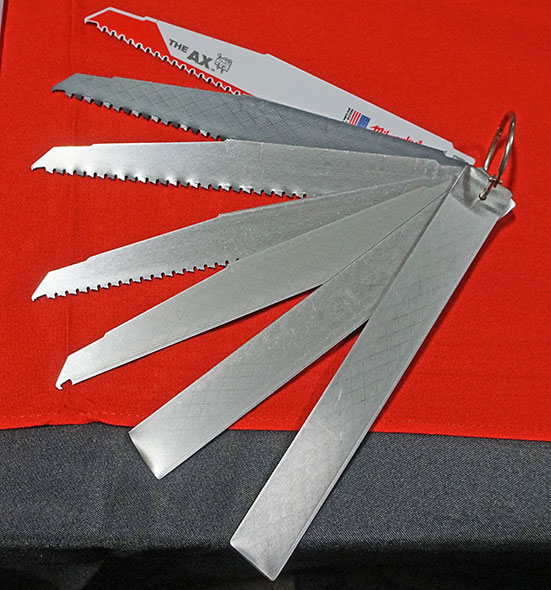 In general the process for making a Sawzall reciprocating saw blade is as follows:

We didn’t follow one specific blade type through the process or just look at one line. They showed us several different lines making different blades so all the photos and videos of different stages are not necessarily the same style of blade. 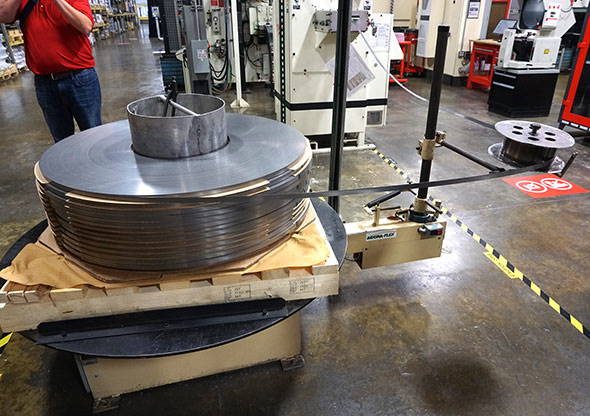 We started with the production of some bi-metallic blades. The blades start as a coil of flat stock that is unspooled into a machine that stamps the blades from the stock.

If you have heard the term bi-metal or bi-metallic thrown around before, but aren’t exactly sure what that means, don’t worry – I wasn’t sure either.

In the case of a Sawzall blade, it means that a thick strip of spring steel is welded to a thin strip of  hardened high-speed steel. The spring steel gives the blade flexibility, while the hardened steel keeps the teeth sharp.

Each blade is stamped out with very little waste, and what waste there is gets recycled.

We weren’t able to take photos or video of the grinding process, but Milwaukee really wanted us to take away that the teeth are not milled before the blades are stamped.

With milling, you have a cutting tool that degrades as it’s used, and so each tooth that is cut is a little worse than the last until it’s no longer in spec. Milwaukee redresses their grinding wheel with a diamond wheel after each 3 inch stack of blades has run, so the last tooth cut is identical to the first.

We were then shown some competing brands’ reciprocating saw blades. Looking at these stacks of blades, it is obvious that the teeth don’t line up. This results from the teeth being milled before the blades are stamped out.

Milwaukee claims that this leads to differences in cutting performance from blade to blade and that the process they use instead, where the teeth are ground after the blade has been stamped, results in blades with identical tooth patterns and identical cutting performance

In this video, the robot (of course painted painted Milwaukee red) is taking 3″ stacks of blades that have just been washed, and distributing them among the four teeth setting machines on this line.

Once in a setting machine, a single blade is taken out of the stack, moved to the setting jaws for the teeth to be set, and then finally placed into a new stack.

After the teeth have been set, the blades are heat treated. We weren’t allowed to record in this area at all, so I’ll have to explain what goes on here.

Rather than heat treat the blades in large batches, where the temperature from one part of the batch to another can differ as much as 50°F, they do heat treating in small batches, in small electric-fired ovens — three trays of blades in a single layer — so they can minimize the temperature differential to 0.5°C. Then they cool the blades with nitrogen that is generated on site.

This small batch size also allows them to be more versatile, and to quickly changing the process to meet demand. For example, they had stack of step bits from their sister plant in Jackson, Mississippi waiting to be heat treated.

Stuart’s Note: Heat treatment has HUGE effects on the final product. If a blade is hardened too much, its teeth will be brittle and prone to breakage. If it’s not hardened enough, the teeth will wear quickly. 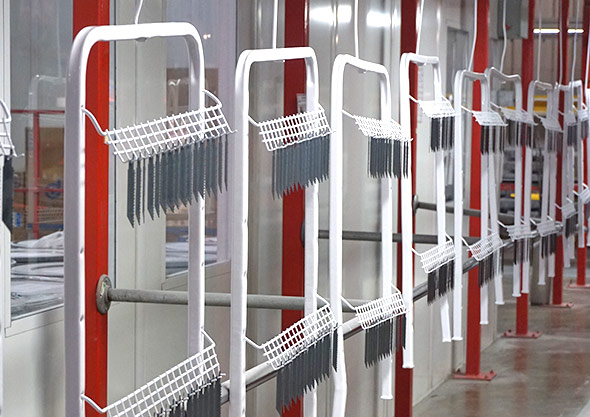 We were shown two different powder coating lines. The first line — the hang line or quick change over line — had workers placing blades on the above racks which made a circuit into the coating room behind them. There was then another group of workers removing the coated blades from the racks after they had been through the oven on the other side of the powder coating room.

The second line — the belt line or automated line — had one person loading stacks of blades into a machine that evenly distributed them on a conveyor belt. That belt then traveled into a different powder coating room

Watching the video you can see that the automatically placed blades aren’t always in perfect position. We saw the guy loading the blades run in a few times to put missing blades in the row.

One thing they didn’t let us photograph or videotape was the blade flipper-over. I’m sure it’s a pretty standard way to flip products over on a line, but it was still neat to watch.

After the first coat and oven baking, an arm picked up a row of blades with a magnet and dropped them onto another magnetic belt that was perpendicular to the line. Then the belt turned until all the blades were positioned upside down above the line, and then dropped them back onto the line with the uncoated side facing up. The blades then went through a second powder coating hood like the one above, and then another oven and cooling tunnel.

Above is a video of the high-speed printer Milwaukee uses to print the text and graphics on their Sawzall blades.

It’s really fast and highly automated. It’s a U-shaped assembly, but for some reason we weren’t supposed to photograph the first part.

A robot magnetically picks up two blades from a line of blades. It puts them on the conveyor which then runs under the high speed printer and a UV curing light. At the end, another robot stacks the blades and a human loads up for them next step. 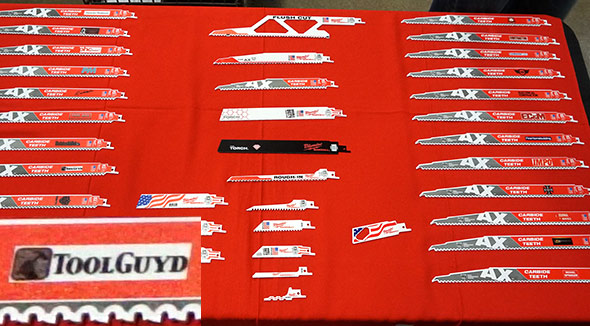 Before the event, Milwaukee requested a ToolGuyd logo for a special surprise. It turns out they wanted to demonstrate the capabilities of their high-speed printing line.

I can be really dense sometimes, because I took a photograph of this table thinking it was just an example of the different blades they could make. Only later when some of the other media people were showing me pictures of their logo printed on a Sawzall blade did I realize just what I had photographed.

The final part of the process is packaging. Here they weigh every set just to make sure there is the right number of blades in the package. This line is also automated, but there are people loading the blades and watching the process. I saw a person fix a packaging problem right on the line.

In the video, you can see a person on the right dropping a stack of blades into the front half of the plastic packaging. The robot then pulls the cardboard insert down from a stack above it, places it on top of the blades, and makes sure it folds right. Then as the packages move down the line another robot pulls the plastic back out of a stack above it and puts it onto the package.

What About the Carbide-Toothed AX Blade?

You’re probably thinking, this is all well and good, but what about the AX blade with carbide teeth? Well, the process behind making that blade is different from a normal bi-metal blade, so I’m going to save it for the next post.

If you missed it, check out our other factory tour coverage of how Dewalt brushless drills are built in the USA.

Part 2: How a Milwaukee Sawzall AX carbide-toothed blade is made!