ToolGuyd > Made in USA > I Use Milwaukee’s Tool Box for Baby Gear, and it’s Been Awesome!
If you buy something through our links, ToolGuyd might earn an affiliate commission. 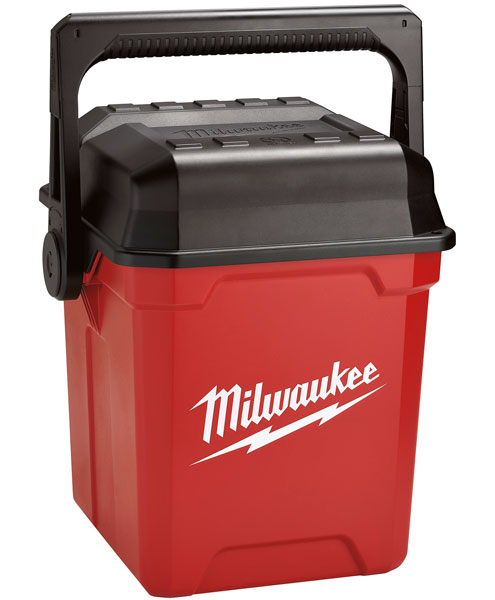 Milwaukee came out with their small bucket-sized tool box a year ago, and I’ve been testing it for a while since then. They also offer a larger tool box, as well as a new 10-compartment organizer tool box. I have nothing but good things to say about Milwaukee’s tool boxes.

As soon as the USA-made 13″ squarish tool box arrived, model 48-22-8010/MTB1400, I loaded it with tools and supplies and hauled it around. It’s a good size for a mish-mash of hand tools and small power tools, as you could see in Milwaukee’s product photo, below.

The box comes with a small divider for the bottom compartment, a removable hand tool insert, which also serves as a taller divider, a tray that rests near the top of the box, and a sturdy lid.

The lid doubles as a seat, and also has a v-groove that holds pipes in place for quick cutting. 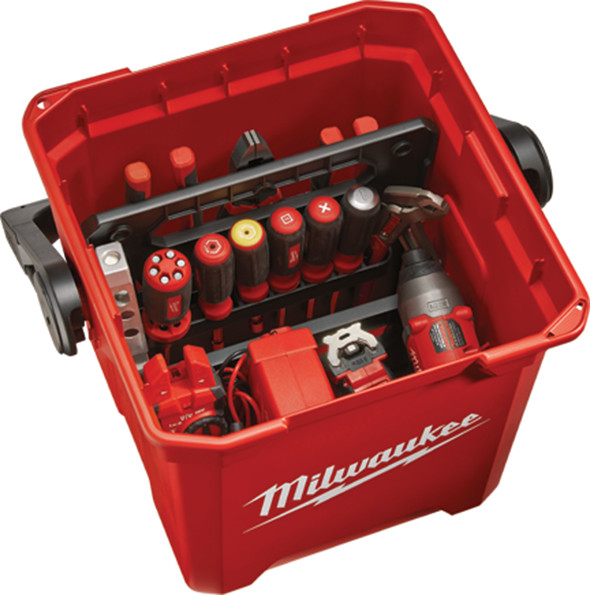 When I tested it with tools, I loaded the box with a couple of pliers, some screwdrivers, a 12V-class saw, an 18V drill, a big roll of duct tape, and somehow I also fit in a small extension cord. But that was Day 1, when I first received the sample. I had loaded it with whatever tools were at arm’s reach.

While I’m still talking about the basic features, I should mention that the lid is fully removable, but can be docked on the side of the tool box for safe keeping. I sometimes forget all about this feature.

One thing I really like is how the lid can be locked in place. With the lid on the box, swing the handle all the way to one side of the box to lock the lid in place, and then swing it back to the other side to unlock it.

When first using the box, figuring out which side to swing the handle to was a trial and error process. Now, I look at the holes at the corners of the lid. The one that’s red is the side that locks in, the one that’s clear is the one that’s unlocked.

There are also arrows on the side of the handle, by the pivot point, which clearly show the lock and unlock directions, but nobody seems to notice them. It can be funny to watch someone try to open the box for the first time.

When the handle is in the upright position, such as when you’re carrying the box, the lid is also locked in place.

Okay, so how have I been using this box? As you might have gathered from the title, I’ve been using it to haul baby gear around, mostly for all-day and overnight trips.

A day or two after I received the test sample, we went travelling with our infant son. I think it must have been an overnight trip, or at least an all-day visit to out of state family. We were trying to find a bag or box big enough for formula bottles, drinking bottles, diapers, wipes, baby butt ointment, cloth diapers for random usage, toys, a baby book, a changing pad, spare clothes, and probably some other stuff.

Previously we had used an empty bulk pack diaper box, but it had gone missing. Maybe we recycled it?

I was going to grab one of my backpacks, but then I saw the Milwaukee work box, just sitting there. I dumped out the tools and loaded it up with baby gear.

The small divider creates a compartment that’s perfect for lining up a couple of 8 oz. formula bottles. The larger compartment is perfect for diapering needs, empty baby bottles, and other misc. stuff. Things that belong together, such as spare clothes, diapers, and teething toys, are all in Ziploc bags. Wipes are separate, and sometimes in the top tray, as they’re useful beyond their obvious purposes.

The top tray is useful for smaller stuff, such as a roll of disposable diaper containment bags, hand sanitizer, and things like that.

I LOVE this box. It’s absolutely fantastic for hauling baby gear around, and I’d use it in a heartbeat for hauling tools around too. It’s large enough to hold plenty of stuff, yet small enough to be comfortably carried. It’s also organized enough so that I can find what I need, when I need it, which is extremely important at times.

It fits in the trunk of our SUV, and when the cargo compartment is too fully loaded, I can easily wedge it between front and back seats. Although I’ve got the bottom a little scratched up now, it’s plenty durable. It fell out of the cargo compartment once, or rather I accidentally knocked it out, but thanks to the locking lid, nothing spilled out.

I was never a fan of carrying tools or supplies in a 5 gallon bucket, and although I tried it once, bucket organizers aren’t my thing either. Because of that, I was a little hesitant about the size and form factor of this 13″ square-shaped tool box. But as soon as I am done using it for day trip and overnight baby gear, I will very likely repurpose this tool box for tools and supplies. Or, maybe it’ll follow my son and become a toddler box. After that, who knows?

There’s no limit as to what these boxes can be used for. At the recent Milwaukee media event, there were a couple filled with sand and used as tent pole anchors. This past weekend, I was tempted to use mine as a cooler.

The box is strong, durable, and versatile, not to mention conveniently sized. We’re going to use it for years to come, for transporting tools, baby gear, and who knows how else it’ll be used.

How would you use this tool box? For tools? Job supplies? Or other kinds of things, like baby gear?

Thank you to Milwaukee Tool for providing the review sample unconditionally.