ToolGuyd > Flashlights & Worklights > New Mini Maglite Pro & Pro+ LED Flashlights
If you buy something through our links, ToolGuyd might earn an affiliate commission.

Maglite has been heavily advertising their XL series of LED flashlights, including the recently added XL200 flagship model, but two new models are keeping their hugely popular mini Maglite line alive and with the times. 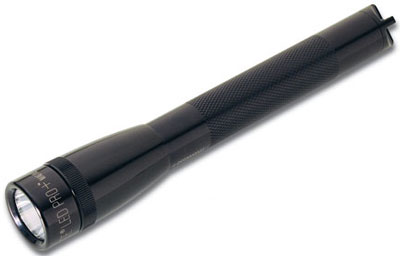 The mini Maglite Pro is based off of the same 2xAA design that has been around for over 25 years. It features a new latest generation LED module, traditional twisty head switch, and what sounds like new power regulation. As with other mini Maglites, the optics allow for spot to flood beam focusing.

Maglite has not yet released final specs, but says that early tests indicate a 200+ lumen output and 2.5 hour battery life.

200+ lumen in a mini Maglite? I’m not going to say “it’s about time!,” but I’ve been wondering when Maglite would join the lumen race. Not that homeowners and casual flashlight users need 200+ lumens, but Maglite must be have been losing considerable market share to cheap high-power models such as the Nebo Redline, which is currently $22 on Amazon.

Early tests show a high output of over 210 lumens, and more than 10 hours of runtime on the low power setting. Maglite says that a unique switching system lets users toggle between high and low output modes.

The one thing we don’t like about the current mini Maglites is the multi-mode electronic switch, which toggles between 100% power, 25% power, blink and SOS modes, which aren’t really needed in a basic flashlight. The new two output mode is a welcome simplicity.

A mini Maglite we picked up during the holiday season has two brightness settings as well – 77 lumens on high and 25% at low, which is probably around 20 lumens. Runtime is 10 hrs 45 mins on high, and 31 hrs 30 mins on low.

Based on  these specs, we surmise that the Pro+ low output setting may be in the neighborhood of 60-75 lumens in order to achieve a 10-hour runtime. It’s good to see Maglite catch up to competitors, but we hope they try to be cautious about playing the lumen race game.

Pricing and availability information is not yet available.

Pro and Pro Plus Info via Maglite