ToolGuyd > Awesome & Cool > Cool Finds at the 2015 Minneapolis/St. Paul Mini Maker Faire
If you buy something through our links, ToolGuyd might earn an affiliate commission. 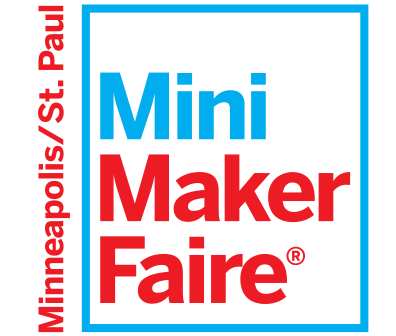 I love to tinker and build things. There’s just something about making things yourself that’s fulfilling in a way few other things are. Whether it’s building your own robots, making your own furniture, or just building something fun, the only thing that’s more rewarding than the finished product is getting other people interested and inspired.

Imagine my excitement when I found out a few weeks ago that Minneapolis/St. Paul (MSP) was having a mini Maker Faire on Saturday May 30th, 2015. I’ve always been jealous of other cities that get their own Maker Faire, and now there was one in my backyard. I don’t think I was ever more excited for my kids to get home from school so I could tell them where we were going in a few weeks.

Saturday rolled around and I decided that I not only wanted to share the mini Maker Faire experience with my family, but with anybody else who was interested in such things — whether they’ve never heard of Maker Faire or are multi-city or multi-year veterans. So I live tweeted the event on my twitter account (@benjamenjohnson) with the official hashtag #makerfairemsp.

Following is a taste of the best exhibits we encountered. Surprising me most was the discovery of all of the resources available for creating and making in my local area that I wasn’t aware of. I have linked to these resources below where I’ve been able to find more information. 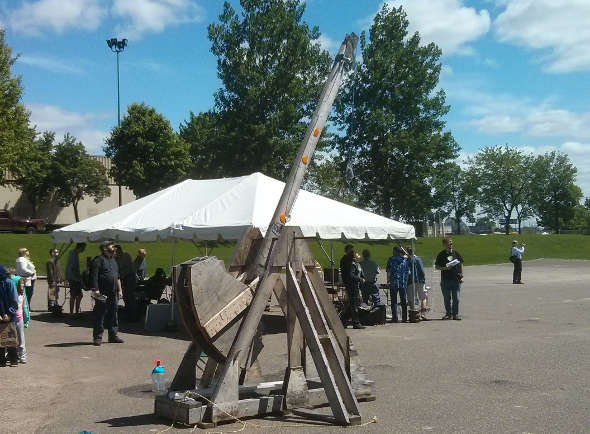 The first contraption we encountered was Riley Harrison’s Trebuchet of Doom from the the Hack Factory. He was using this gravity powered flinger to fire water balloons across the parking lot at kids who were jockeying to be splashed by the cooling payload.

Right next to the Trebuchet, some makers were firing shirts out of a three barrel T-shirt cannon attached to a homemade hovercraft. Unfortunately they didn’t have the hover craft working, but the sound of a bunch of T-shirts being fired 100 yards at a group of kid looking to score a free shirt reminded me of something out of Star Wars. 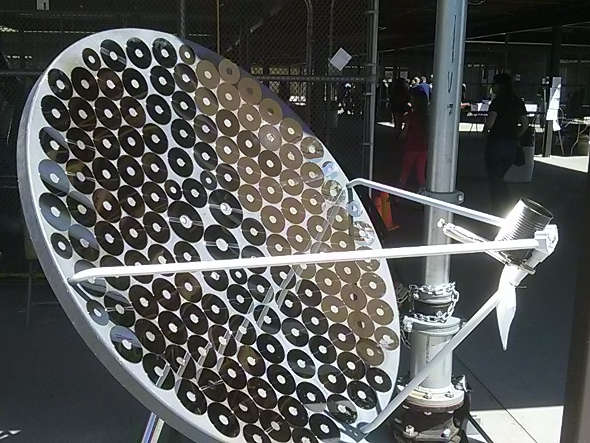 Further into the Faire, I spotted this Cooking with Hard Drives exhibit by Greg Olson. He recycles hard drives, more specifically the shiny and reflective data platters, and old satellite dishes, repurposing them into solar cookers. If you take a close look at the picture you’ll see a pair of Vise Grips locking pliers holding the can at the focal point. 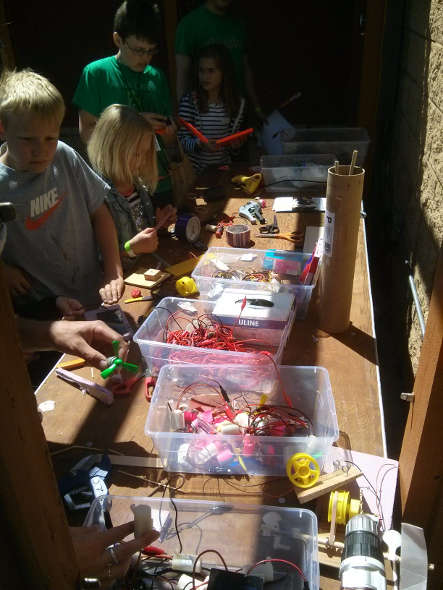 REcharge Labs sponsored a build you own solar powered boat station. Kids would start with a piece of foam and use rubber bands to attach solar cells and motors. Then they could test their designs in a big water trough next to the booth.

As you can see, my daughter’s design needed a little work. After watching her design spin around, my son decided that a dual-prop boat was the way to go. 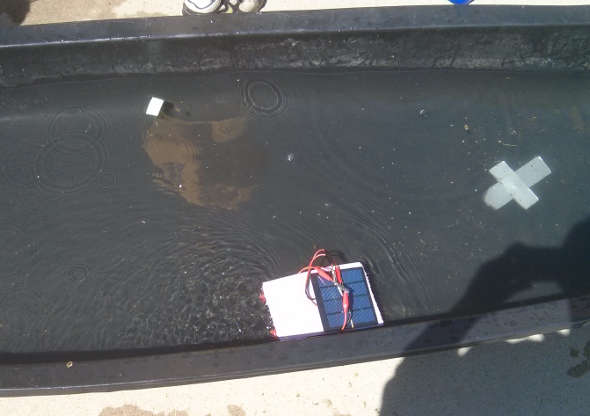 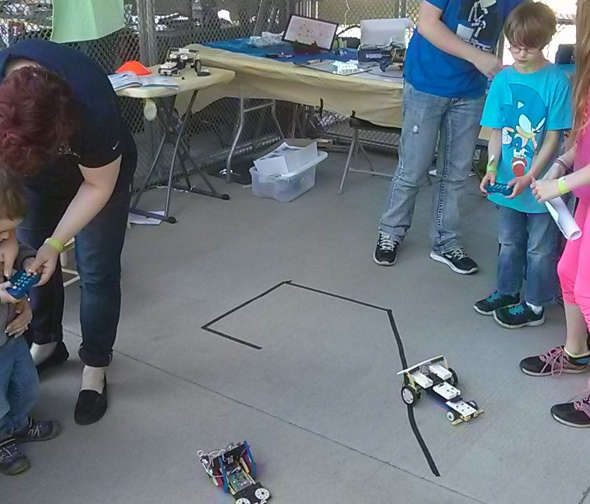 Robots 4 U had the robotics kits that they use in their robotics classes on display. But the big hit was the several pre-built remote controlled robots the kids could play with. 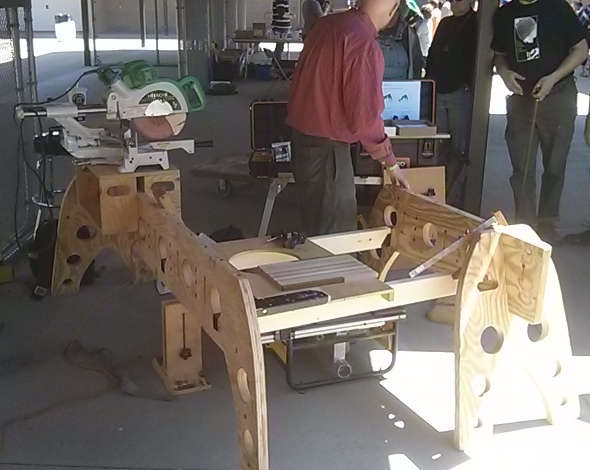 You never know what you’ll find around the next corner. I spotted a man demoing some sort of weird saw horse system. It turns out it was the TriHorse, a modular sawhorse that knocks down for portability and can be used as a stable platform for many different operations, including support for table saws and miter saws. 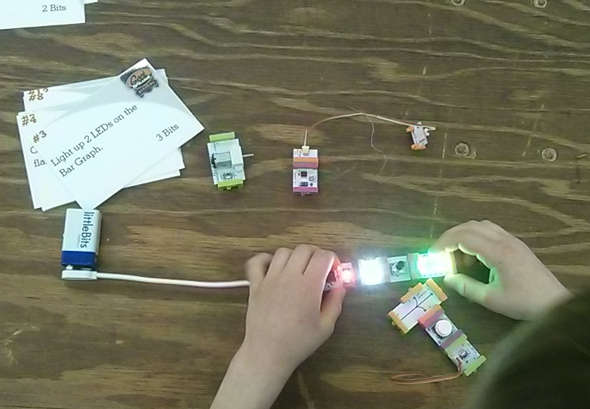 Best Buy sponsored a large booth which they set up a few different tech products like Little Bits, WowWee MiP Robots, and Samsung Gear VR. After watching the little WowWee self balancing robots for a while, my son gravitated towards the Little Bits tables.

Little Bits are circuit modules that allow for easy connection of components like LEDs, batteries, potentiometers, light flashers, motors, servos and more. All of the circuit elements align and snap together with built-in magnets, making it quick and simple for anyone to create a fun and working circuit in a jiffy.

Each table had a set of Little Bits and a stack of cards, with each card presenting a different problem for you to solve. For instance, the card pictured above asks you to connect 3 Little Bits together to achieve the action on the card.

I was really surprised that my son sat down long enough to make it through the entire stack! Little Bits have really found a way to make learning about electronics fun.

You can buy Little Bits thru Amazon, directly from the company, or from many maker-supply retailers, such as Sparkfun. 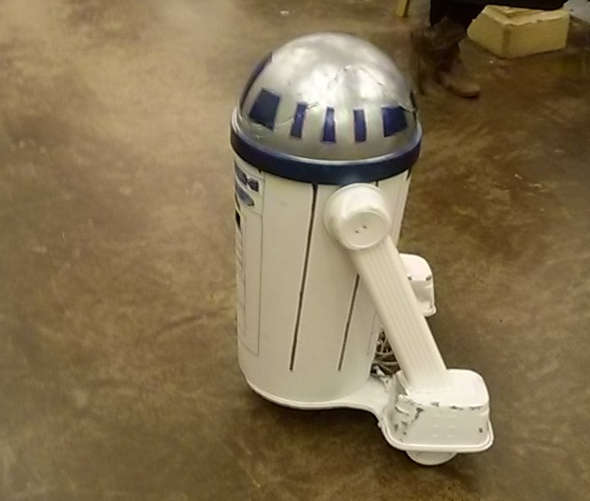 Who says a robot needs to be made out of expensive components? We found this R2-D3 unit wandering around the convention space.  Its body is made from a trash can, some downspouts ,and various containers. 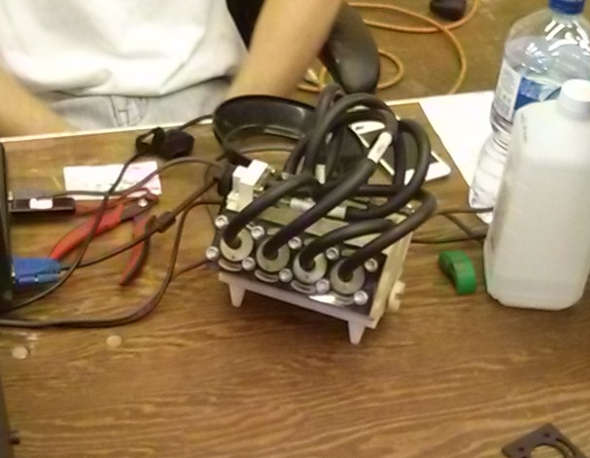 Built at Century College’s Fab Lab, all the components of this air-powered V8 engine were 3D printed. It actually runs! Ross Hjelmgren, the designer, powered it up by connecting it to an air hose. He admitted that some critical dimensions had to be re-machined on a mill and lathe. 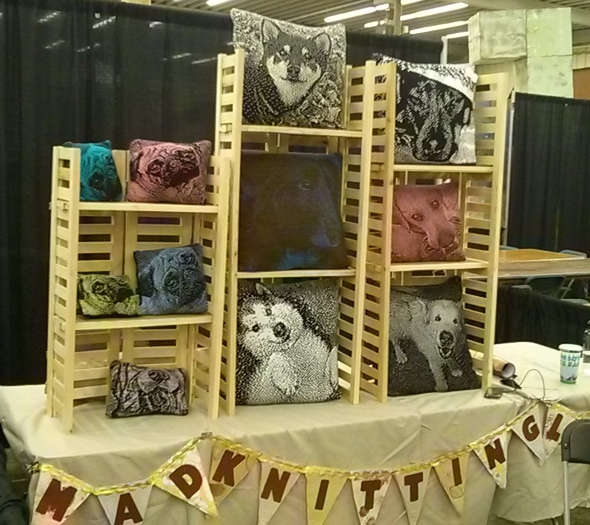 I’m a sucker for dogs, that’s why the Mad Knitting Lab caught my attention. All the pillows on display were made on their knitting machine that was hacked and equipped to turn digital photos into fabric. 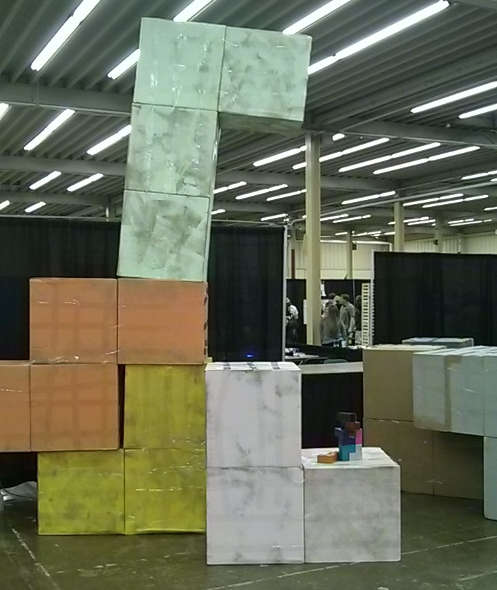 Besides having tons of tables set to play with Lego and other construction toys, Leonardo’s Basement had a giant Tetris set and other giant building blocks made of cardboard that you could build life-sized structures with. 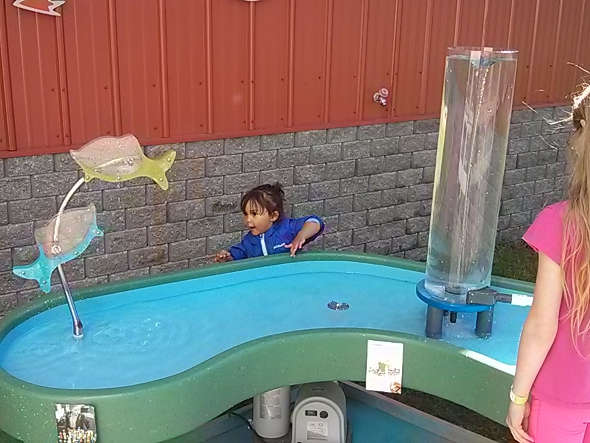 Outside of one of the buildings, kidZib!ts had a water activity table that attracted some little kids, and some big kids too! My 10-year-old daughter spent a while playing with the vortex generator.

The Rockler and MidWestSolutions booths teamed up to allow you to make wooden Minnesota keychains laser etched with your name. Rockler used their CNC Piranha to cut tabbed Minnesota shapes into sheets of 1/8″ plywood. Then they had a station where you could use a chisel to cut through the tabs. Next they had a drill press set up for drilling the lanyard hole. 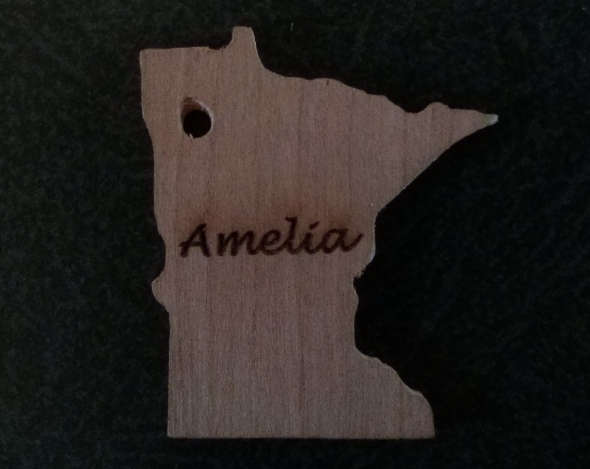 After you drilled your hole, you took the key chain blank over to the MidWestSolutions booth where they would enter your name into their software. Then they put the keychain in the Epilog laser cutter and told you to press the green button. A few seconds later you had your personalized keychain. 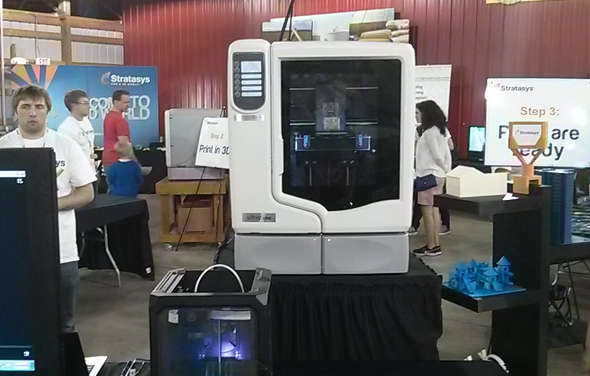 Stratasys was also allowing visitors to design a name tag in SolidWorks that they would then print out on one of their 3D printers. It was only supposed to take 15 minutes, but they had such a high demand early in the day, they had to turn away people because there just wasn’t enough time to print them all — even though they had half a dozen machines running. 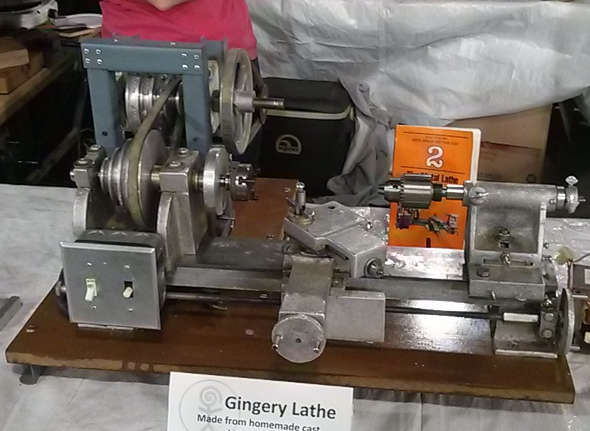 This homemade lathe was cast out scrap aluminum and is just one of the many homemade tools to be found at the Scorch Works.

The single coolest exhibit at the Faire had to be Sisyphus by Bruce Shapiro. Watching it was almost worth the price of admission alone. Imagine a large table covered with sand, then watch as a single large ball bearing plows through the sand to form complex designs. 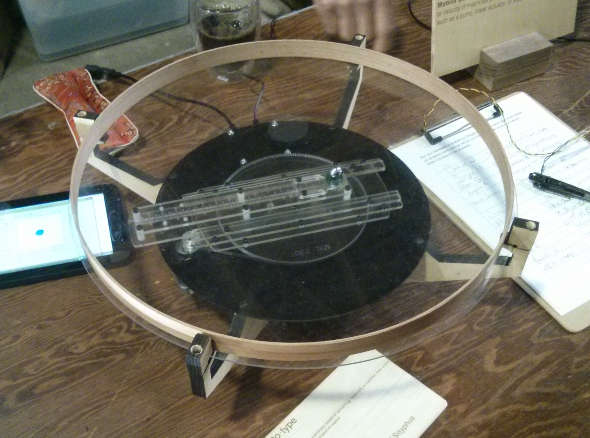 Of course there’s no magic here, it’s all controlled by a magnet on a linear actuator that can rotate on a turntable. They had a miniature demonstration model on their table showing the mechanism.

Turn down the lights, take a deep relaxing breath, and watch some more videos of Bruce’s Sisyphus on his website.

This event was only a community-organized mini Maker Faire. It lasted just a single day and had around 200 exhibitors. A flagship Maker Faire (there’s one in the Bay Area in May and another in New York in September) lasts a weekend and has many more exhibits. Being smaller does have its advantages: admission is cheaper and young children can only handle so many exhibits before they get tired; my 7-year-old son was done after 3 hours.

Hopefully within a few years the MSP mini Maker Faire will grow into a full-fledged Maker Faire. I talked to a few of the organizers and they were thrilled with the attendance numbers. What I love about events like is how they spark more interest for design and engineering in children and how they help to build a larger DIY community.

Find a Mini Maker Faire Near You