ToolGuyd > Editorial > Mixed Feelings About a Small USA Manufacturer and New Overseas Licensing
If you buy something through our links, ToolGuyd might earn an affiliate commission. 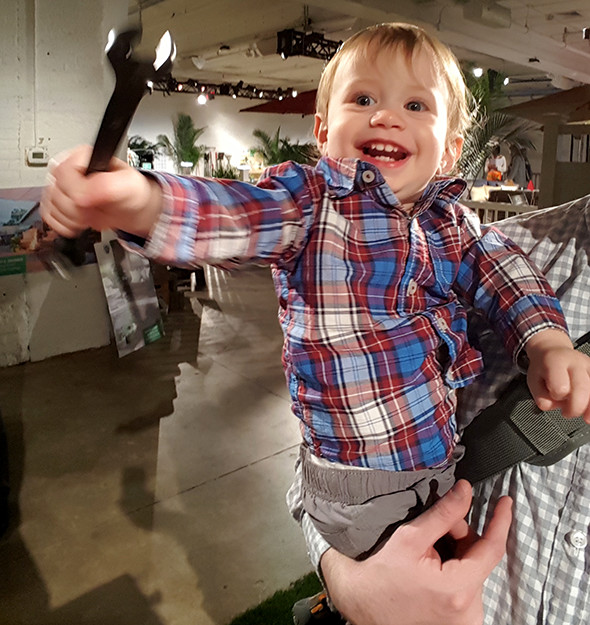 I tend to have established views on offshoring, but recent happenings have shaken my feelings up a bit. Maybe if I put my thoughts to paper I can make better sense of them.

There are few other things to talk about before I get into what my mixed feelings are about.

Really Right Stuff is a premium USA-based camera accessory company. They make tripods, ball heads, and other related photography accessories. In my limited experiences, I have found RRS to be a step above everyone else in their field.

RRS boasts – more quietly than I would – about how everything they manufacture is made in the USA. Even the sourced parts are made here, “down to the smallest screw.” Even the hex keys they bundle with their gear is made here. (If I recall correctly, they’re made by Bondhus.)

Only their “soft goods,” aka bags and cases, are made overseas by a USA-based company.

A few months ago, RRS sent out a survey that asked for my opinion as a customer, on Quality, Cost, & Origin Preferences.

On Page 2 of the survey, they asked for how I feel about several paths they might take, such as:

If Really Right Stuff made lower-cost products in another country, I would still buy them if the quality was the same.

I would buy more RRS gear if the technical features were reduced to lower the cost, while still being made in the US.

If there were “light” models where some features or capabilities were reduced to allow for lower pricing, would I buy them? Possibly, but some brands have tried that and the end results weren’t very good.

(I’m referring to Leatherman’s Croc, which was bundled with the Sidekick tool for a Home Depot holiday promo bundle. I have a Piranha, which is more featured than the Croc. The Croc was just crude in comparison. It’s not just the features that were cut back, but the finish quality.)

Part of what is great about Really Right Stuff products is the attention to detail and the superb quality. Would that carry over at an overseas factory?

The imported workbench has a different finish, and the different worktop seems to be made with a cheaper hardwood than maple.

The products are nearly identical, but with notable differences. What most consumers only see are their prices. The company doesn’t openly disclose which workbenches are made where. It was only when I received a test sample of the hardwood workbench that I was made aware that it was not made here.

Now onto the mixed feelings.

Bridge City Tools announced that it would license overseas production of tools to be sold outside the USA.

Bridge City Tools makes super-premium woodworking tools. Some are pricey but affordable, others extremely cost-prohibitive, such as this $3,800 smoothing plane.

I ordered a couple of Bridge City Tools a few months ago – most small, one a bit more of a splurge. I figured that I could easily resell them if they didn’t live up to my expectations.

Bridge City Tools goes through production cycles, and so even some of their regular tools are not always in stock.

I had one problem with the Bridge City Tools drill guide I bought. My Dewalt Pilot Point – my go-to bits for non-critical general purpose drilling tasks – wouldn’t fit! So I contacted Bridge City Tools, and they said:

I checked with our production specialist and he said that we have seen this numerous times. And in every case it is the imported bits that are the issue. Our drill bushings have a 0.0005” clearance.

Dewalt Pilot Points are pretty good drill bits, so I was in denial until I did some checking. Imported, yes. But crappy?

We talked about drill bits, and they pointed out one of John’s blog post about garbage drill bits. John is Bridge City Tool’s founder, and as far as I am aware he is also the product designer. I had linked out to and discussed his drill bit post in an early ToolGuyd post.

I pulled out one of my USA-made industrial drill bits and ordered a Lee Valley bit for the size I needed. Lee Valley makes their brad point drill bits from USA-made twist drills. Both USA-made drill bits fit perfectly.

Here’s a summary of the announcement in case you don’t follow the above link to read it: Bridge City Tools has found a Chinese manufacturer that can produce their manual table saw at such high quality that it would be indistinguishable from a USA-made saw.

The Bridge City Tools made in China would be licensed designs said to be made to the “exact same quality,” but the pricing is expected to be half as much.

50% lower pricing with the only noticeable difference being “made in China” labeling instead of “Made in USA?”

Overseas manufacturing is being established so as to make the tools more affordable in international markets.

A big part of me doesn’t like this news. I guess I’d be happier if they produced a lesser line of tools made overseas at lower prices. Some brands do that – they have a line of affordable tools – mainly imported – and a line of premium tools made in the USA.

It’s my wallet that wants Bridge City Tools to make their licensed imported tools available in the USA. I’d sure buy some of them.

But speaking from the heart, I don’t want Bridge City Tools or their licensed manufacturing partner to sell imported versions of their tools in the USA. Because I know that, once they do this, few customers or potential customers will be willing to buy the USA-made versions.

Who would spend double the money on a USA tool if an imported design with identical design and features and comparable quality was also for sale?

One could argue that an imported version of a tool would make the brand more accessible to a wider customer base, and while true, would any of those customers really graduate to the USA-made versions? No. If the quality of their imported tool purchase was as great as they’re said to be, why not buy more imported versions of Bridge City Tools?

Here’s the conflict I’m talking about: I feel a little grumpy that I won’t be able to buy imported versions of Bridge City Tools’ products at half price. But I also agree with the decision, seeing it as the best way to ensure that Bridge City Tools continues to make tools in the USA.

I don’t have a solid understanding of how Bridge City Tools operates, but I believe they might make some things themselves and work with machine shops and other companies to handle different manufacturing steps of complex products.

They build tools to order, typically when enough people have added their names to a pre-sale list.

What will happen 1 year, 5 year, 10 years down the road if imported versions of Bridge City Tools were available in the USA?

John, the founder of Bridge City Tools, is truly an artist. I’d say he designs tools for function and aesthetics. And he doesn’t hold back on anything, hence the premium pricing. If you don’t like that, there are plenty of other woodworking tools to choose from, some with the same functionality, and others coming close.

In my heart I love that here’s a USA manufacturer that’s sticking to their ideals and preserving USA jobs.

I’m a little upset that woodworkers outside the USA will be able to buy comparable quality made-in-China versions that cost half as much.

It’s a condition of their licensing agreement that the made-in-China versions match or exceed the quality of the USA-made Bridge City Tools.

They won’t exactly be Bridge City Tools, though, if they’re licensed designs. Would they? I think this is something for the collectors to debate about.

When I buy tools that are made in Europe, the cost to my door is typically a lot higher than if I lived in Europe, except for some cases when I can order from Amazon UK or DE. So I can understand how relatively expensive tools made in the USA might be even more prohibitively expensive elsewhere.

For the tools on my wishlist that I can’t afford or can’t justify, I’ll have to suck it up and get over it, just like when there are other tools I want to use but cannot afford.

If it sounds like I’m ranting, that’s not my intention. I’m simply trying to get everything down on paper, in hopes I can resolve the two completely opposite feelings I have about this.

I take pride in how I lean towards USA-made tools sensibly. I value features and quality, but with all things equal I’ll spend a little more for USA-made products.

I’m embarrassed a little by my want for access to the half-priced imported versions of Bridge City Tools, because it almost seems hypocritical.

What would I have done in John’s place? Keep things as they are, with the tools inaccessible to most of the world outside the USA? Well, not completely inaccessible – I’ve read there are knock-offs, and maybe that too factored into John’s decision.

It’s not easy to talk about Bridge City Tools, because many of their tools seem to be aimed at collectors or woodworkers who have run out of things to buy and still have money to spend. Some of their tools are affordable problem-solvers, others are art collection pieces.

My woodworking isn’t anywhere near the level where I could do these tools justice. I don’t need them, although I’ve benefited from the drill guide’s unique design.

If you’re a woodworker, and you considered some of their tools to be appealing and potentially useful but outside your affordability, would you buy them if made in China and half the price?

And if you’re not a woodworker, imagine that we’re talking about Snap-on or another USA tool brand.

What if whatever at the top of your wishlist was licensed to another company that could make and sell it for half the price, but only outside the USA? Would your feelings be as mixed as mine?

I’ve spent a lot of time criticizing some brands and retailers for their offshoring, mostly when tool quality plummeted or design compromises were made to compensate for lower quality components.

But here, when a USA company makes the decision to work with an offshore partner to produce tools under license, I’m unhappy because the tools won’t be sold in the USA as a condition of the agreement?

It sounds selfish of me, but how does this move benefit me? I think that the answer should be obvious, but I’m not really getting it.

As much respect as I have had for John over the years, stemming from his blog posts and what I’ve heard about him, his transparency makes me respect him and Bridge City Tools even more. If only more business owners and brand executives were as willing to talk about their overseas arrangements.

I Never Took a Shop or Woodworking Class, But…

Is Home Depot Dumping Bessey Clamps? If So, What Will Take Their Place?

I’m Not Sure Why, But I am Interested in Knives