ToolGuyd > Hand Tools > Knives > More About the Milwaukee Tool Fastback Utility Knife Holiday 2018 Bundle Deal
If you buy something through our links, ToolGuyd might earn an affiliate commission. 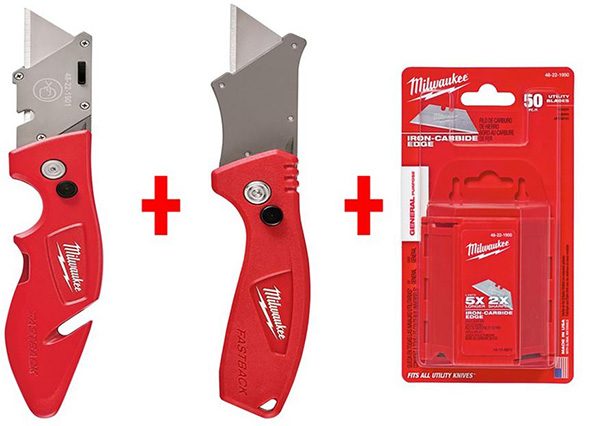 Shown above is how it’s depicted online at Home Depot.com. 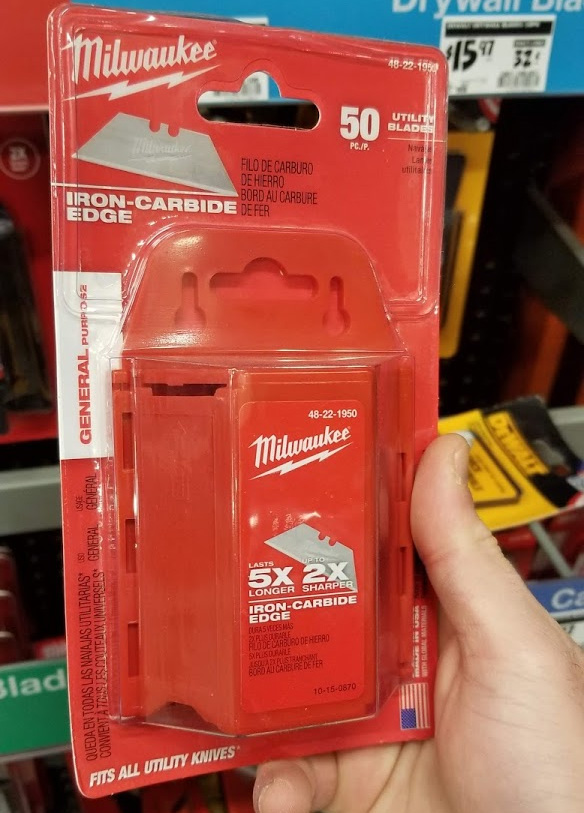 This is the pack of Milwaukee general purpose iron-carbide-edged USA-made utility knife blades that is available on store shelves year-round. The dispenser has a dual-purpose design, as it’s dispenses new blades and also has a disposal section for safely storing used blades. 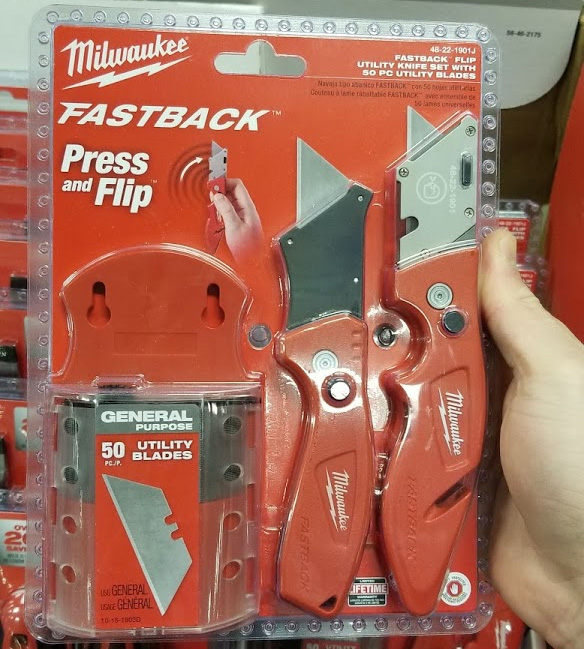 A reader comment, in reply to the deal post, prompted to investigate what you actually get in the bundle pack. With the in-store bundle, you get the Fastback knife, the Fastback Compact knife, and a pack of 50 general purpose utility knife blades.

But, it’s not quite the same as the everyday Milwaukee blade pack. 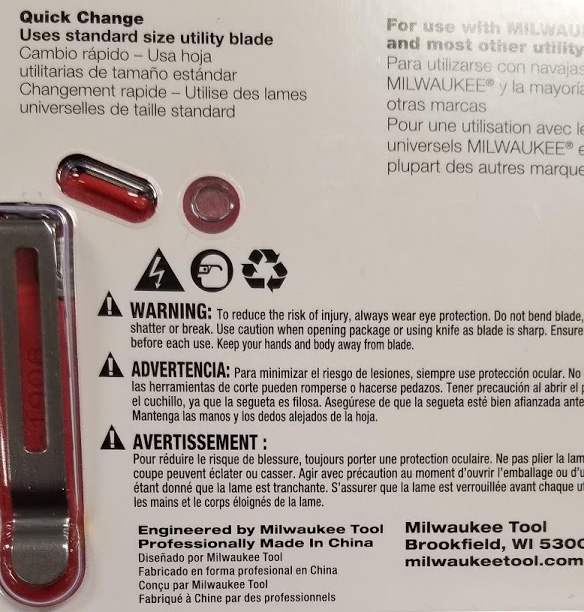 With the regular pack of blades, the contents are made in the USA. Well, at least the blades are. I don’t recall, but the dispenser might be made elsewhere.

Wit the promo pack, it says the contents are Professionally Made in China.

I think that the online image, showing the everyday 50 pack of USA-made blades, is an error, but most likely an unintentional one.

The fact of the matter is that while some of us will be disappointed at the slight discrepancy, most people won’t care, or even notice. To most people, “general purpose utility knife blades” don’t need any more details.

I should also point out that it looks like the dispenser in the holiday “special buy” pack is only a dispenser, with no storage compartment for used blades. It’s hard to tell for certain, but I am maybe 99% convinced about this. (While I was tempted to buy a bundle to find out, I really have way too many utility knives at this point. I didn’t even open some of the Lenox knives I bought last year for comparison purposes.)

Now knowing that you get a “special buy” blade pack rather than the everyday quality blades, I wouldn’t quite say that you get $29 worth of tools for $15. But, even if you take a few dollars off the value, what you get is still an excellent value for what you pay.

I believe the Fastback utility knives are exactly the same, whether you buy them individually, in two-packs, or as part of this bundle.

Would you spend a couple of dollars more on this bundle if it came with the everyday blades and dispenser/disposal pack, as opposed to the “special buy” version? Honestly, I don’t think I would.

Milwaukee Tool could have very easily taken the blade pack out of the bundle entirely, and it still would have been a good deal. So, while not the same blades, they do add extra value to the promo bundle.

And although I say “while not the same blades,” we really don’t know. As a reader mentioned, if they were the same blades, they would have the iron-carbide-edge labeling on the front. Maybe? Older packaging didn’t say this. 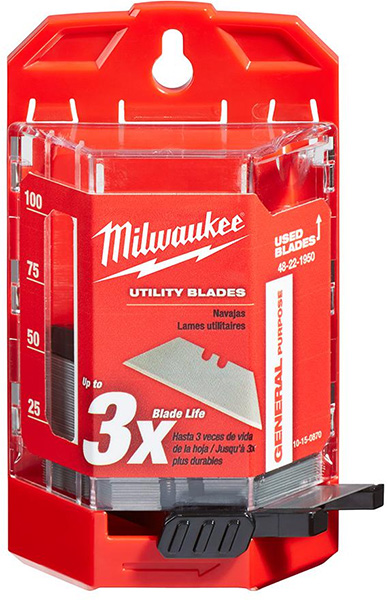 This is the image that Home Depot has up for the 48-22-1950 blade pack. The version that’s in-store now mentions the iron-carbide edge and 5X longer blade life. But this image doesn’t say that, and it in fact mentions up to 3X blade life.

While a little disappointing, I don’t think the difference in what you get is worth getting worked up over. Plus, there could be a difference between what is ordered online and what is available in stores. (I might order a bundle pack online, just to be sure.)

Hypothetically, while potentially not as good as the [newer?] iron-carbide-edged USA-made blades, you still get 50 general purpose blades.

Long story short, we’re all a little more informed about what you get in this $14.88 bundle. That being said, do you feel any differently about it? I don’t.