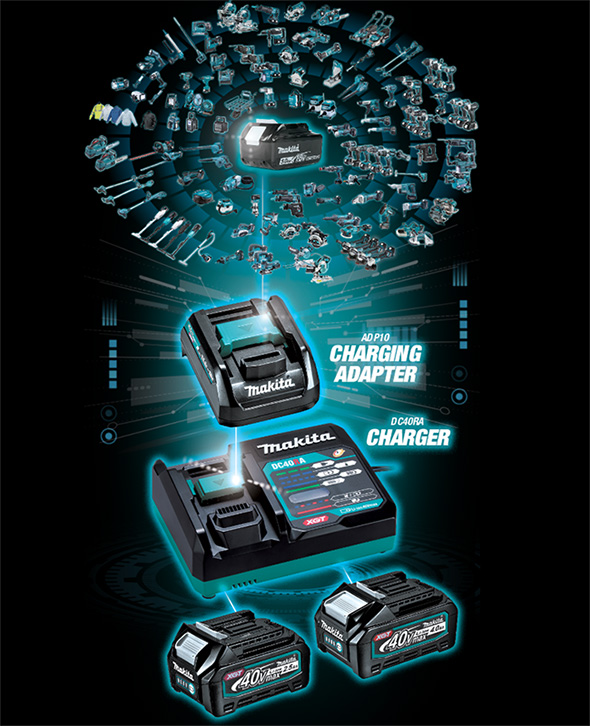 We recently posted about the new Makita XGT cordless power tool system, and have also learned that it will launch in the USA alongside Makita’s 18V LXT cordless system in late 2020.

Makita USA hasn’t said anything about cross-platform compatibility (or incompatibility) between the new 40V Max XGT tools, batteries, and chargers, and their 18V system.

However, Makita Australia provided a graphic that shows there will be a charging adapter, ADP10, which will allow for Makita 18V LXT batteries to be charged on the new XGT 40V Max charger.

The introduction of a charging adaptor has enabled consumers to charge both LXT and XGT batteries when using the XGT charger.

The Makita Australia press release uses similar language regarding how the XGT system will launch alongside the current 18V LXT system:

We are excited to announcement the launch of our new XGT 40V battery system that will coexist with LXT and continue towards our vision of a battery solution for all applications!

The keyword here is coexist.

Makita Australia includes much greater context behind the new XGT platform, with more information and details than Makita USA’s short press release. They describe how XGT is a genuine solution for high demand Industrial applications, and that it is future proof thanks to the charging adapter.

Makita will continue to develop and release new LXT tools for professional trade applications and the introduction of 40V Max will provide consumers with a genuine solution for high demand Industrial applications.

Makita again emphasizes that the XGT cordless power tools will not replace or stifle their current 18V system. It’ll be interesting to see if the situation changes in the next 5 years, but I don’t think it will. Makita makes some fine 18V-class cordless power tools, including their sub-compact line.

We might eventually see compact or sub-compact 40V Max cordless power tools, given the physical similarities between 18V LXT and 40V Max XGT Li-ion batteries, but there’s not much to start making predictions on.

The XGT range of tools and batteries come with a built-in program, providing digital communication between the battery and tool. Allowing not only for the battery to talk with tool but also the tool to talk to the battery. This Provides Makita XGT a foundation to adapt to even higher technology advances in the future.

The incorporation of tool design, higher output batteries and built in communication program makes XGT the best high demand system on the market, reinforcing the leadership role Makita has when it comes to innovation and technology. Makita XGT is a genuine LONG-TERM SOLUTION!

I don’t quit see what Makita has done to make “XGT the best high demand system on the market.” Are they planning for a tool customization or “communication system” similar to what Milwaukee (One-Key), Dewalt (Tool Connect), and Bosch (Bluetooth-Connected) have all already developed? 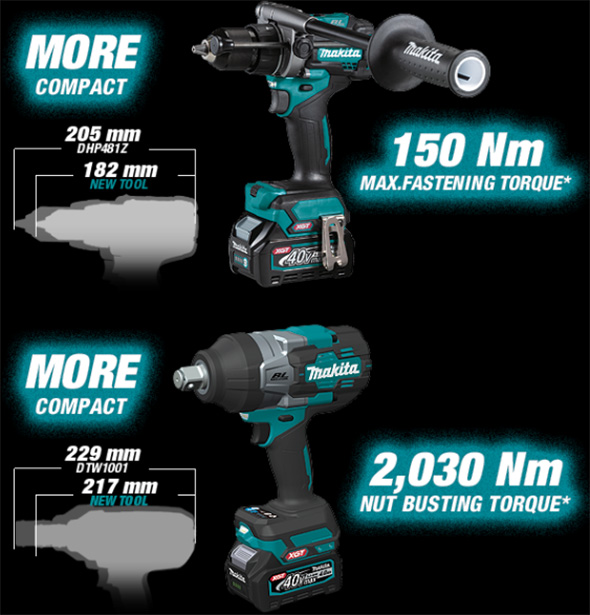 The bases of the new 40V Max cordless drills and impacts look a little bulkier than 18V equivalents. Perhaps this is where the new communication technologies will be housed. 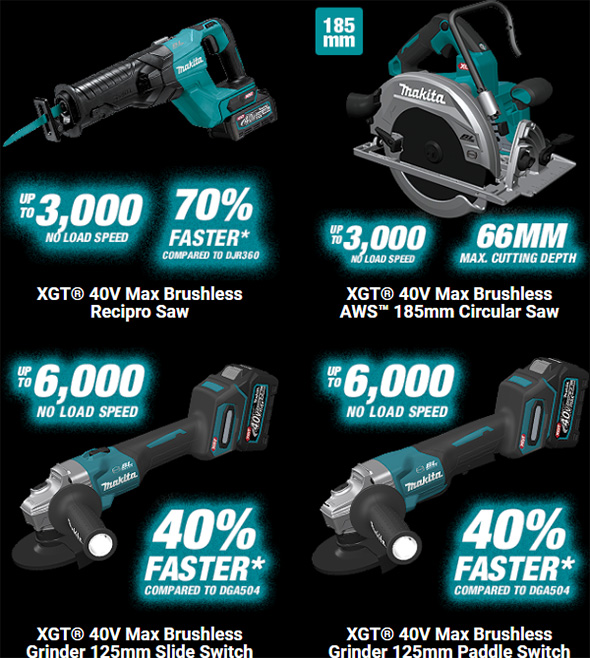 Makita mentions other advantages of their new XGT 40V Max cordless power tools over 18V LXT equivalents. The new Makita XGT reciprocating saw, for instance, is said to be 70% faster than their 18V X2 reciprocating saw. Compared to their 18V brushless angle grinder, the new 40V Max XGT grinders are said to be 40% faster. 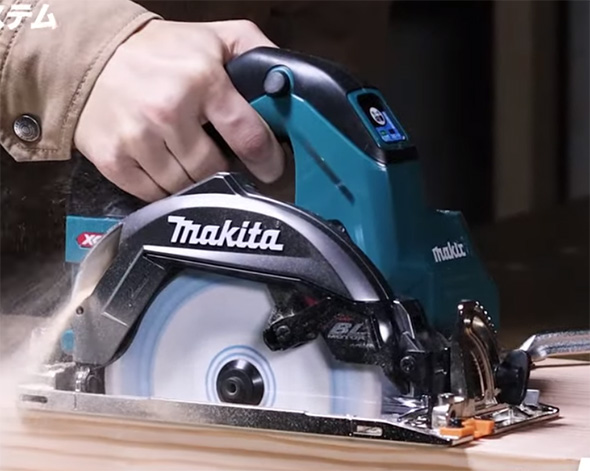 Makita Australia indicates that there will be two XGT cordless power tool combo kits, at least when the system launches – a 6pc combo kit and a 2pc drill and impact driver combo kit, with both including the 40V Max to 18V LXT charger adapter. 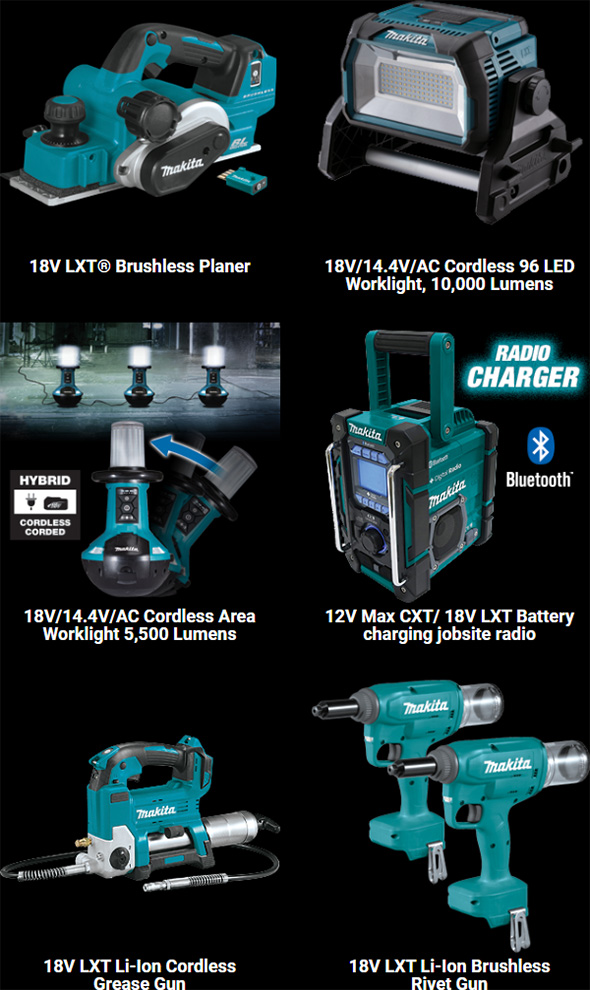 To support their claims of continued 18V LXT investment and a “tremendous roadmap” of new LXT products, Makita Australia showed off some new additions, including a hybrid-powered LED wobble light, rivet guns, and a battery-charging Bluetooth jobsite radio. 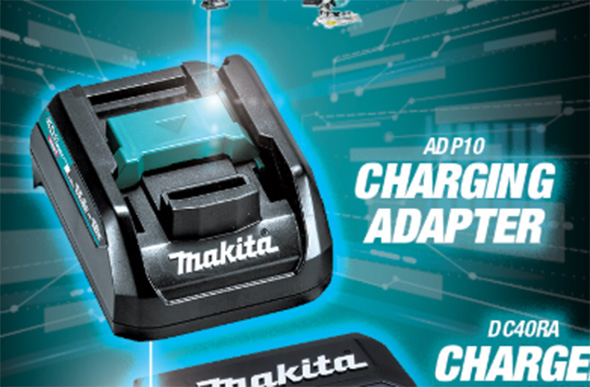 Will the new charging adapter really help users who have already bought into Makita’s 18V LXT system? If you’re a Makita 18V cordless power tool user, you already have an 18V charger. If you buy into the XGT 40V Max cordless system, you’ll need the 40V Max charger and the adapter.

It’s good to have options but will using the adapter for charging 18V batteries really be easier than simply using the 18V charger Makita users already have?

Side note – Makita says that the XGT charging system will charge batteries in as little as 28 minutes.

Now for a confusing part: 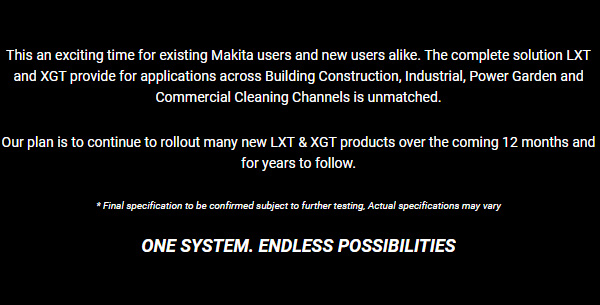 One system? But everything Makita has been saying is about how XGT 40V Max and LXT 18V will be two separate systems. Having a one-way charging adapter doesn’t make them one system.

And what about Makita 18V X2? They don’t address this at all, except for the comparative mention of how the new XGT reciprocating saw is faster.

If I had to guess, I would think that we might eventually see an 18V 2-port battery adapter that allows 18V batteries to power 40V Max XGT cordless power tools. However, with the 40V Max system being built from the ground up, the technology might not allow for that. Makita talks about how the XGT batteries will talk with XGT tools, and also how the XGT tools will talk to XGT batteries. And also – “This Provides Makita XGT a foundation to adapt to even higher technology advances in the future.” That might not allow for such an 18V 2-port to XGT adapter.

With talk about “Smart Technology,” Makita isn’t showing all their cards just yet. 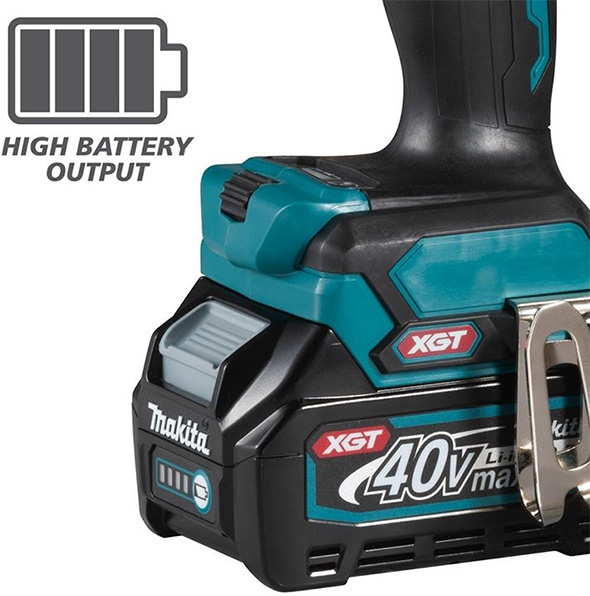 Here’s a closeup product image that shows the base of an XGT cordless drill and XGT battery. I wonder what that thumbwheel switch is for…

We still have a lot of questions, but hopefully we’ll learn more about the new Makita XGT cordless tool system well before their “late 2020” USA launch.

On social media, someone asked Makita when there will be 18V LXT batteries with higher capacities and next-gen Li-ion cells (21700).

A higher amp-hour 18V battery will not get to the next level of cordless solutions for higher demand applications.

Does this mean Makita won’t come out with 18V compact 4.0Ah or 8.0Ah LXT battery packs?