ToolGuyd > Hand Tools > Knives > More of my Notable OLFA Snap-Blade Knife Experiences
If you buy something through our links, ToolGuyd might earn an affiliate commission. 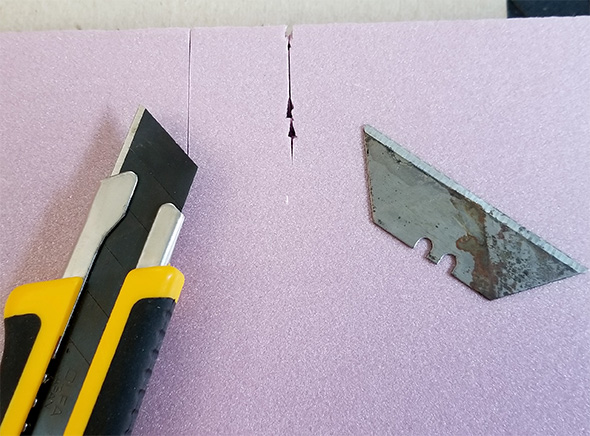 I have been convinced of the benefits OLFA Snap Blade utility knives bring to the table.

As a reminder, we’ve been participating in a paid OLFA sponsorship arrangement, for which I integrated their Snap-Blade knives into some projects and everyday testing. (More on that soon.)

On my workbench, there’s a do-everything utility knife that I use for a lot of things until the blade absolutely needs to be replaced. I use it on twine, opening up packages, breaking down boxes, plastic binding straps, zip ties, and all sorts of other things. When the time comes, I’ll change the blade.

I wanted to make a cut in 1″ foam insulation, to cut out a notch, and decided to try it on a test piece first. The blade was dull and should have been replaced, as it tore at the cardboard. I went to flip the blade, and saw that the other side was in even worse condition. As my luck would have it, that was the last blade in the handle, and my replacement blades were in the house.

I retrieved the OLFA knife, broke off the mostly-dull leading blade segment, and made a cut with the fresh edge.

Having multiple fresh and sharp blades immediately available makes it more likely I’ll actually change a blade. As easy it is to change blades on utility knives, I tend to put it off, especially when the handle is empty and I need to seek out a couple of replacement blades.

For softer materials, such as foam, a sharp blade is needed to make a clean cut. You might not always want or need a clean cut, but when you do, a fresh blade can make things go quicker, easier, and with better results. It’s even more important when making a cut in several passes for the times when you cannot “score and snap.” 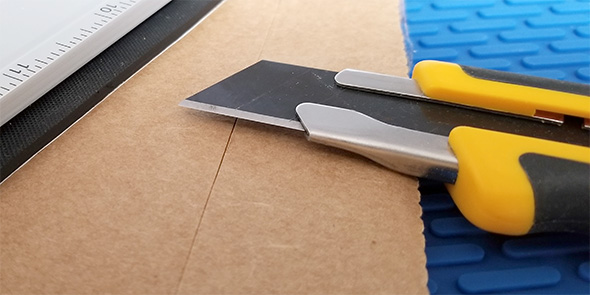 I don’t like cutting rubber sheeting, period. Scissors kind of get things done, and with a utility knife, you need a sharp blade and a lot of pressure.

This is another area where I have come to appreciate OLFA’s blade sharpness, and the knowledge of having multiple sharp blades at the ready.

Since I have several utility knives of different styles, I don’t always remember whether I have replacement blades loaded in the handle, or even if the front edge is the first or second edge of the loaded blade.

With OLFA’s Snap Blade knives, and all knives of this kind really, you can see what you have. If I know I’ll need more than what I can see, I can bring a pack of replacement blades with me. That’s easier to do with these knives too, as OLFA replacement blade packs take up far less space. 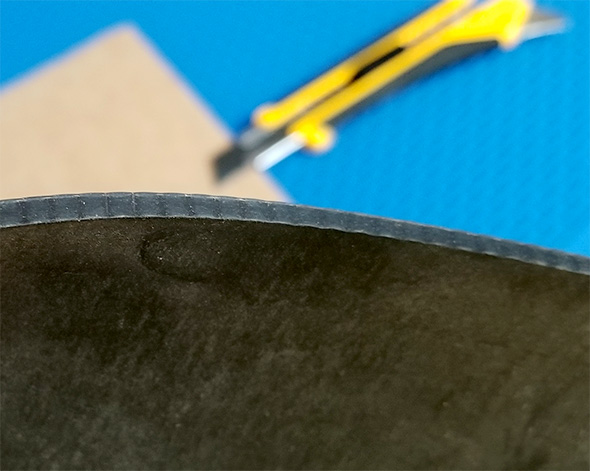 Shown here is a factory (or warehouse) edge. I don’t know what they use to make these cuts, other than it leaves ripples in the edge of the rubber material.

Here you can see the factory edge on top, and an OLFA-cut edge on the bottom.

Rubber sheet materials, especially this one (textured on the front and with adhesive and a paper liner at the back), are tough to cut, as you need to slice through the entire thickness at once. There’s a lot of resistance, and so you need a sharp blade. Sometimes I make such cuts in multiple passes, other times I muscle through and cut things all at once.

With an OLFA blade, I can make that cut in a single pass. With a standard two-sided utility knife blade, it can be hard, even with a fresh and sharp blade, due to the thickness.

If I’m making grommets with a punch, it’s not quite important what the edge quality looks like, when I cut a strip of rubber from a larger sheet. But if I’m cutting the rubber to create a seal, cushion, or to fit a recess, the edge needs to be as precisely cut as possible.

Although still not easy, I have found that the OLFA knives made available to me do make such tasks easier.

And if it could cut this tough stuff, it’ll be a breeze to cut through construction materials such as vinyl. 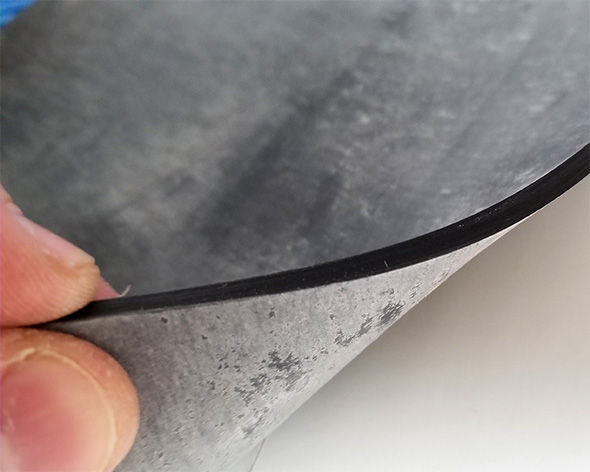 Here’s another rubber sheet – a thicker one – that I was able to cut in one pass, thanks to the sharpness and shape of the OLFA knife blades. But that was 12″ stock. For cutting larger pieces of rubber or vinyl materials, I’d score and then cut the material in 2 or more passes. It’s a lot easier, saving on effort and reducing the chance of straying off a straightedge.

For underlayment and other thinner sheet materials, one pass should get thing done. As with the foam insulation example above, you want a sharp blade that cuts cleanly, rather than a dull blade that can tear and displace material as it cuts. The OLFA’s Snap Blade design makes that easier. 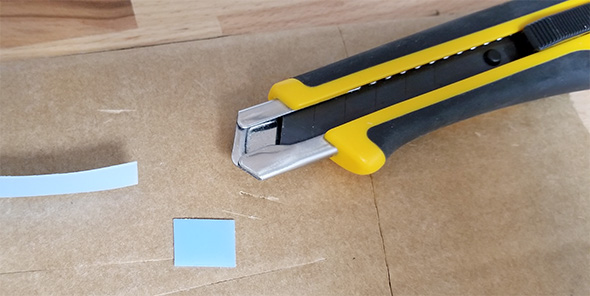 One of the tougher applications that I have enjoye using OLFA knives for is to cut through UHMW (ultra high molecular weight) adhesive-backed plastic strips. I used these as low-friction liners for my industrial bin shelving rack, and have found a few other uses for it.

I didn’t have large-enough flush-cutting pliers or close-enough-cutting scissors, and the blade on my utility knife was a little dull, with the tip gliding over the plastic tape a little. It was workable, but the first few test cuts required a little extra time.

So out came an OLFA knife, and it made quick work of things. I was also able to extend the blade to trim edge protrusions flush against aluminum channel.

When any knife blade starts to dull, it’s harder to cut this stuff in a single pass. Sometimes it will glide, if the tip is dull. Other times it might tear the backing liner a little, rather than cleanly cutting it. 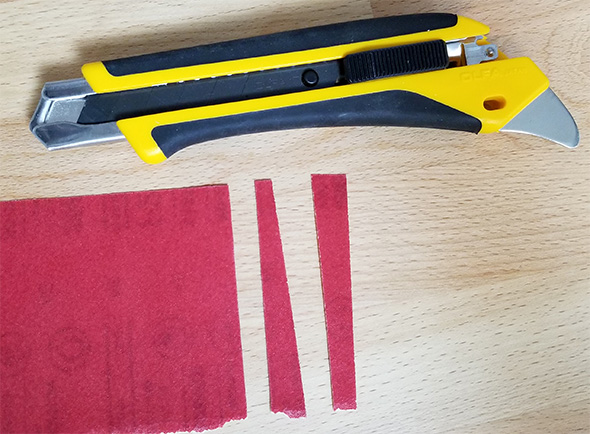 I don’t cut sandpaper all that often, usually preferring to fold and tear it. Strangely, I found myself more willing to use the OLFA knife for that. Even with a blade that was nearing the end of its usefulness, the paper backing didn’t tear or grab, it cut smoothly.

This experience reminds me that I change utility knife blades way too infrequently. Some materials definitely require frequent blade changes, but for the “little bit of this, little bit of that” types of cutting applications I usually do, I can be slow to recognize that a fresh blade is needed. It’s also frustrating when the tip of a standard blade is damaged or dull while the rest of a side is still good.

I also tend to get longer-lasting blades, which do last longer for tougher applications. But anything that requires more intricate or precise cutting? Fresh blade compared to fresh blade, I now find myself now preferring the OLFA. 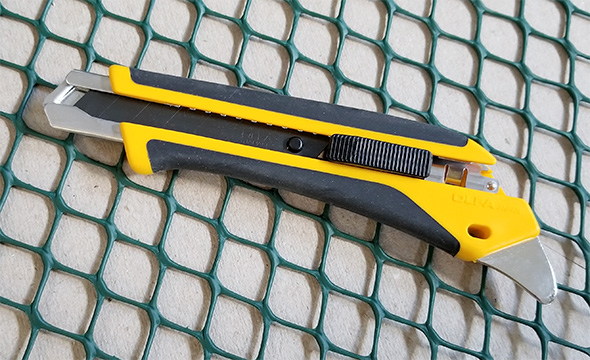 I had to cut through a lot of deer fencing and plastic wire fencing last summer and fall. The deer fencing was a cinch, and I liked that I could extend the blade for longer and faster cuts through doubled-over material.

I was hesitant to use the OLFA on thicker and harder-to-cut plastic wire fencing material, but it got through it. I’ll figure out an easier way for next year, but I was happy that the OLFA knife was able to get things done.

The OLFA knife is a lot lighter than the metal-bodied utility knives I am familiar with. But, it’s rock-solid, surviving drops and handling tougher cuts with the same ease.

This experience has really opened my eyes. Give the LA-X a try, and you might see why a growing number of pros are switching over.

For those of you that already swear by OLFA Snap-Blade knives, what do you use them on?