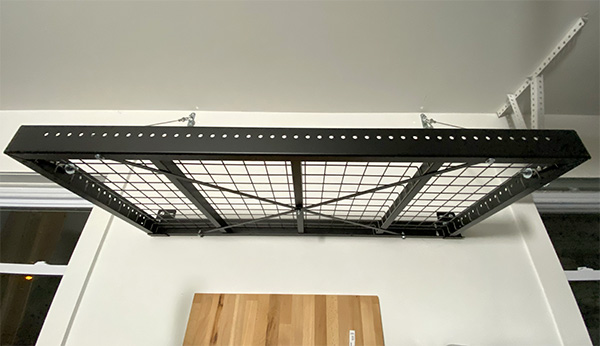 A couple of days ago, Home Depot had garage storage products on sale as part of the deal of the day. They have had quite a few tool and storage deals over the past couple of months, but this was the first time I saw New Age Pro wall-mounted shelves on sale.

Actually, this was the first time I saw New Age’s wall-mounted shelves at all.

I’ve seen New Age’s ceiling-mounted shelf system before, and while I really need over-the-head storage, I don’t have a good place where I can mount such shelves to the ceiling. The shelves would be risky to mount in the middle of my garage ceiling, which has no central beam support, and I always pish-poshed the idea of perimeter-mounting the ceiling shelves.

When I saw these wall-mounted shelves, a light went off and I bought a 2-pack of 2′ x 4′ shelves. 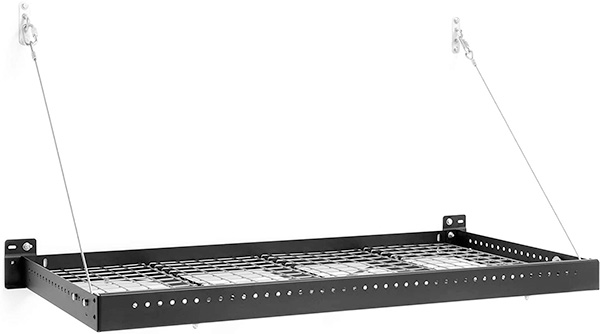 This is what they look like. The bottom brackets allow for some installation flexibility, and the upper supports can be mounted to the wall or ceiling.

I opted to mount my upper brackets to the wall. To do so, you need at least 26″ of space from the ceiling, from the top of the upper bracket to the bottom of the lower bracket.

Drilling holes so close to the ceiling benefits from a little added clearance, or else your pilot hole might not be straight and your lag screw not perfectly flush. Ask me how I know. 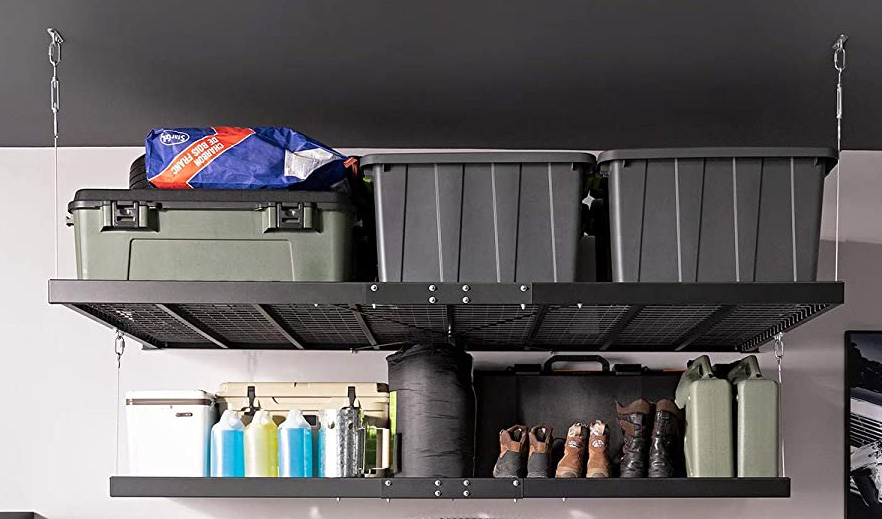 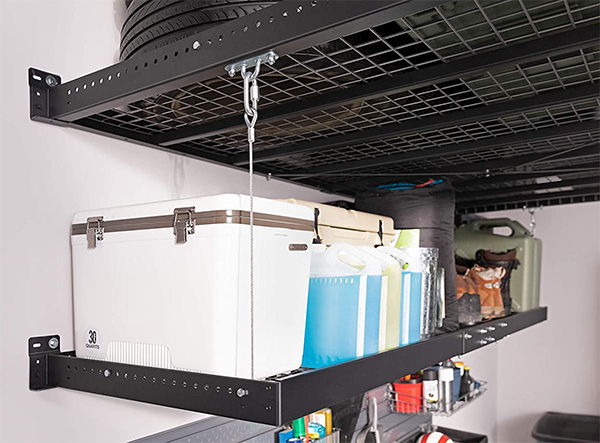 You can mount one shelf directly under another, linking the front support of the bottom shelf to the lower support rail of the top shelf.

You can also connect shelves together for a seamless perimeter configuration.

The shelves can support 600 lbs max, and you’ll need to refer to the installation manual for a break-down on how the weight limit changes for different shelf configurations.

Here’s how my experience with these shelves has been going so far:

I was a little worried about how delivery would go.

I ordered New Age Pro wall cabinets from Costco a while back, and one arrived damaged. They replaced it without issue.

I also requested New Age Pro products for review when we were part of the Home Depot influencer program, and have had mixed impressions. First, I was extorted into paying cash for the freight driver to deliver the products, otherwise it would “take too long to deliver and disrupt his schedule.” The driver also shredded two sections of the driveway.

One of the big floor-standing cabinets from that delivery was dented and had to be hammered into shape, and one of the drawers in the smaller cabinet quickly developed a hard-to-close issue with its slides.

Overall, New Age Pro seems to be of decent quality, but I am always a little concerned about how smoothly a delivery might go.

I placed my order Sunday afternoon (sorry, I learned about the deal too late to post about it), and it arrived on Tuesday.

Given the weight, it was delivered via UPS, and in a single 2-pack box. 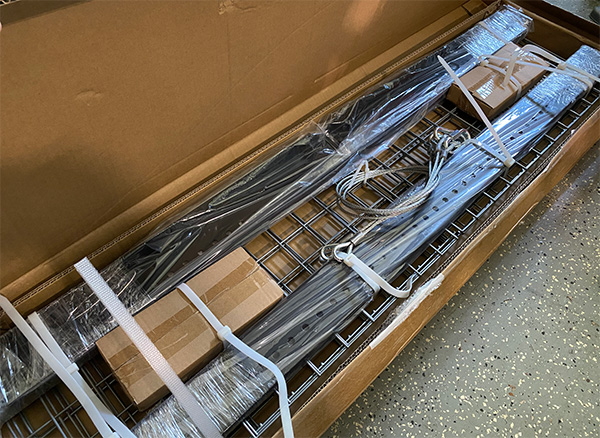 Unboxing the shelves surprised and thrilled me. Look at the size of those zip ties used to hold everything secure during transport!

The shelves shipped in a box that was heavily armored with a heavy and solid fiber cardboard material.

Despite all this, one of the U-shaped supports had a corner that was bent out of shape, but nothing that 10 seconds with my Knipex Pliers Wrench (~$48 via Amazon) couldn’t remedy.

I found the attention to packaging to be excellent.

Installation was tricky for me. On paper, it’s straightforward, but I ran into confusion and a couple of snags.

First, the user manual emphasizes that the cabinets need to be installed with full 3″ engagement into wood studs. They provide 3″ lag screws, with markings that indicate Grade 5 strength.

In several spots, when talking about the pilot hole or wall fastening, they repeat the 3″ wood stud depth requirement.

If you need to fasten any bracket between studs or joists, you’ll need to add wood blocking, and the manual does demonstrate this with greater thoroughness than I am accustomed to. Perhaps this because you don’t have as much flexibility as when mounting something like a cabinet with multiple fastener locations?

Where it shows or describes wood stud installations, or with blocking added, there is zero mention about drywall.

I’m sure the included 3″ lag screws would be fine, and that ~2-1/2″ depth in wood studs past drywall is still plenty strong, although the working weight capacity might be lower than the max rating.

The repeated mention about 3″ wood stud screw engagement depth is probably due to different wall surfaces having different thicknesses, but I didn’t want to have to think about it.

It might not be the best idea, but I headed out to the hardware store and picked up 1/4″ x 3-1/2″ Spax lag screws, which are said to have Grade 5 strength. That’ll give me 3″ of wood stud engagement, right?

The Spax screws weren’t a perfect fit for the included 1/4″ washers, but there weren’t any difficulties. Spax screws don’t require pilot holes (at least not at this size), but I drilled small pilots anyway to help with placements and to ensure I was drilling into studs.

I should mention that I also used Spax lag screws when installing some of my New Age wall cabinets a while back, as they’re easier to work with than standard studs that require larger and deeper pilot holes.

For the first shelf, for some reason my studs were ~46″ apart. I tried to figure things out and checked with two stud finders maybe a dozen or two times. Eventually I realized that I can move the installation brackets over a little bit.

The lower wall brackets are designed such that you can connect shelves together easily. Both of my shelves were to be installed in such a way that no additional shelves could fit between or next to them. Once I realized that, I modified the placement of the lower support brackets, and thanks to the mounting holes being horizontal, I was able to place the brackets exactly over the studs.

I marred my ceiling a little, drilling into the wall so high up, and one of the wire rope fasteners isn’t quite flush but felt body-weight secure, and so I’m not worried about it. I made sure to be careful when drilling the other pilot holes, reaching for a smaller drill/driver. An alternative would have been to space everything out a little lower, to increase the clearance between the top of the wire rope bracket and the ceiling.

For mounting to the wall, the manual gives specific instructions as to how to install the wire rope. For ceiling-mounting the front support, you can set things in 1-inch intervals. There is even a handy no-math-required chart in case you need to move the ring placement a couple of inches due to joist placement.

The second shelf went up a lot easier, thanks to proper 48″ stud spacing. I made a mistake with the bottom bracket placement, but that was easily fixed.

All this is to say that there is some installation flexibility.

I found it odd that every single one of New Age’s product photos show the wall mounted shelves being installed over drywall – presumably into wood studs or cement walls, but the manual seems to make the assumption or suggestion that the wall shelves are to be mounted directly to wood studs with no drywall or other wall covering in between. *Shrug?*

I *might* add some wood cross-beam supports, between the u-channels that support the wire grates, as smaller loads seem to cause the grates to flex a little more than I expected. By “smaller load,” I mean a milk crate placed next to a plastic tote. I’m not too worried.

Right now, I used the shelves to get stuff off the floor. As I continue my efforts to clear out my garage, I will likely use the shelves for bulkier stuff, probably in larger totes or bins. Dust collection hoses and things like that – that’s part of what I want to do up on these shelves.

I am extremely pleased, with my only regret being the inability to install more of these shelves.

I could potentially double-stack the shelves, with an additional level added beneath each shelf, but I don’t want to limit the headroom at those areas of the garage. I have ~9-foot ceilings, and just under 7 feet of headroom beneath these shelves. This means I can fit 6′ boards or sheets right underneath. Conveniently, there’s enough room on either side for 8′ boards.

YES, I would buy these again. Ask me again a year from now, and hopefully my impression will the same or even better.

The shelves are available in black or white. I went with the black. The 2-pack was on sale for $171. At the time of this posting, the 2-pack is $250, and single shelves are $100 each. Some of the shelves are still on sale at special pricing.