ToolGuyd > Power Tools > Cordless > New Dewalt Cordless Heat Gun
If you buy something through our links, ToolGuyd might earn an affiliate commission. 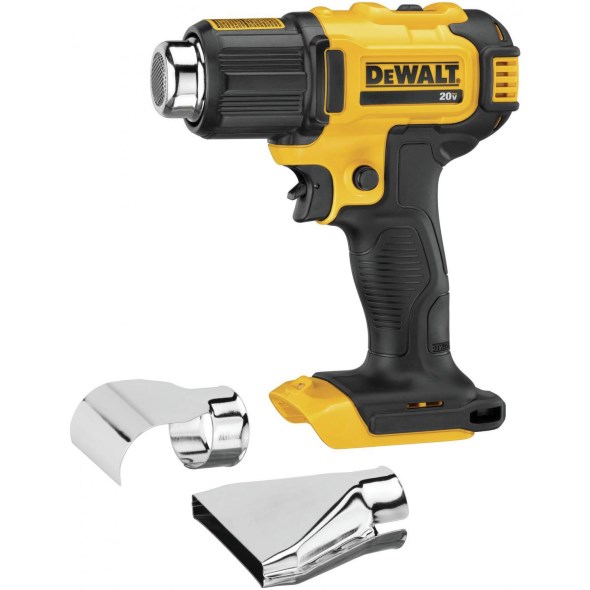 Details are a little sparse at the moment, but here’s what we know so far.

The Dewalt cordless heat gun looks to be operated by squeezing the trigger, with what appears to be a small safety interlock switch that could prevent unintentional operation during transport. There’s a lock-on button, and on top is the temperature selection switch.

You would be forgiven for mistaking the new Dewalt DCE530 heat gun for a cordless drill at first glance. Design-wise, it looks like a cordless drill, with respect to the overall appearance, but the switches and controls are also in all the right places where a drill’s switches are located.

The curved reflector nozzle is typically used on pipes, heatshrink tubing, and similar-shaped materials, and the spreader is used to provide even heat over a wider area.

The DCE530 is available for pre-order now and looks to be shipping at the end of July 2019, but that might be subject to change.

I just picked up a Werner heat gun, and if this had been available, I would have given it a serious look. Granted it would be double the cost, but being cordless this makes the tool much more practical. The integrated LED lights are an expected feature on a drill and I’ve not seen them on any heat guns that I’ve looked at.

What might you want a cordless heat gun for? Would the new Dewalt tool check all your boxes? 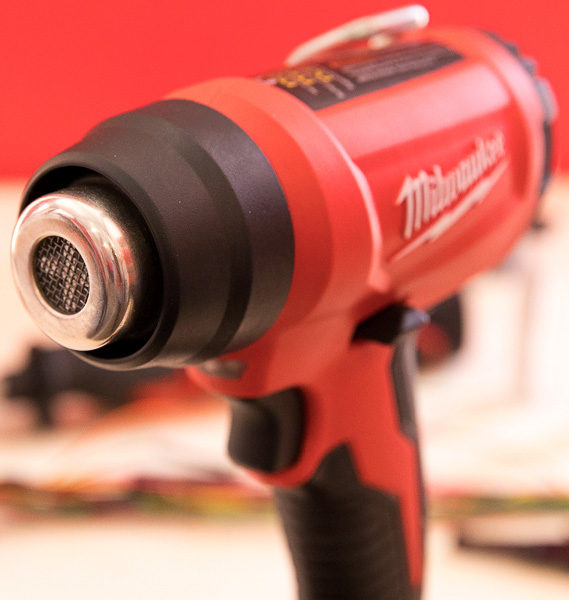 When Milwaukee’s M18 heat gun was first announced, they said it would deliver a max temperature of 1000°F. Later, its maximum temperature was specified as 875°F in press materials. In tests, Benjamen wasn’t quite seeing these temperatures.

This could also explain the two temperatures in the Dewalt cordless heat gun product pages. While the Dewalt is said to have a max temperature output of 990°F, to get that measurement requires 340 seconds of heating duration at high, and is measured very close to the nozzle (0.4 mm is ~1/64″). The 875°F spec that’s also mentioned in the spec sheet, assuming it’s correct, might be closer to the operating temperature, or maybe an “operating temperature under ideal conditions” specification.

From what we can tell so far, the new Dewalt cordless heat gun looks to be well-matched with Milwaukee’s. It is similarly featured, except for the absence of a ladder hook.

Thank you to Herb for the heads-up!