ToolGuyd > Power Tools > Cordless > New Dewalt Cordless Miter Saws in 2019? (Reader Question)
If you buy something through our links, ToolGuyd might earn an affiliate commission. 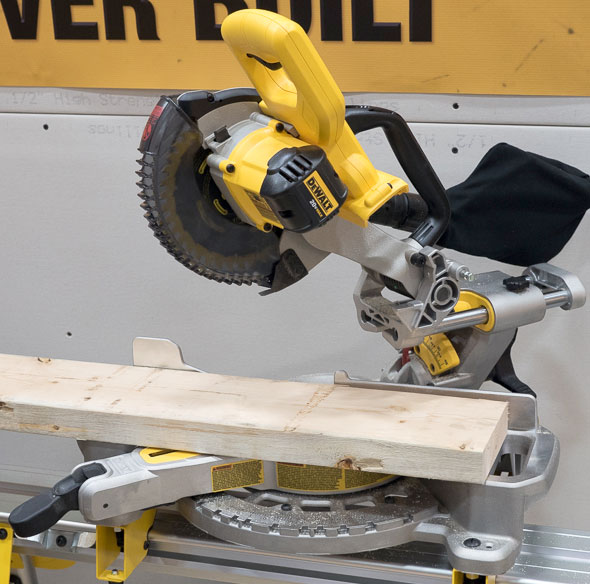 A reader emailed in with a tough question, asking for our thoughts as to whether Dewalt would be coming out with a new cordless miter saw soon.

Unfortunately, I haven’t heard any rumors yet. I can only speculate, but it’d be unsubstantiated guessing. Houston was okay with that, so I gave it some thought.

With Dewalt’s 20V Max cordless 7-1/4″ miter saw, Dewalt was insistent at the time that it didn’t need to be brushless. If its power was sufficient, and runtime decent, why add a brushless motor?

Could they come out with a brushless 7-1/4″ saw? Sure. But consider the pricing of their current offering.

If the current model still sells well, why come out with a pricier brushless one? It wouldn’t be a good idea, unless they can match the pricing, but can they?

While Dewalt could potentially come out with an 8-1/4″ saw, would they? That blade size is used in cordless table saws for power and portability considerations. In a miter saw, it’s possible, but it could be a headache when it comes to blade selection and availability.

Can Dewalt come out with a FlexVolt 60V Max 10″ cordless miter saw? Yes.

Dewalt came out with 10″ and 8.5″ FlexVolt miter saws overseas, but the last time I checked, they indicated that they will not be bringing those designs to the USA/North American markets.

Can Dewalt come out with a new FlexVolt 60V Max 10″? Yes. A non-slider 10″ saw? I’m not so sure they’d want to. Sliding? What benefits would it present compared to the current 120V Max slider? Maybe lower cost of entry if it only requires one battery.

The Dewalt 120V Max 12″ compound miter saw is discontinued, or at least the kit SKU DHS716AT2.

The Dewalt DHS790A, their 120V 12″ sliding miter saw remains extremely popular. The last time I compared cordless miter saws, the DHS790 was king of the hill.

I would say that Dewalt might be in a position to respond to industry trends and developments, but they’re leading in the cordless 12″ category, offering something that other brands don’t have.

Also, consider that Dewalt knows how many of their miter saws retailers sell in North America, corded and cordless, 10″ or 12″, sliding or fixed. They’re going to leverage that data when determining whether to expand their cordless miter saw lineup or not.

Given their current offerings, anything Dewalt might come out with in the cordless miter saw field could potentially take away from their existing offerings, rather than generating new purchases. There will have to be something new or changed before we’ll see any new cordless miter saws from Dewalt. It’s not knowing what new developments might be going on behind the scenes that makes it difficult to predict their plans and activities.

Milwaukee, on the other hand, has a hole in their lineup, with no red counter to one of their fierce competitor’s top cordless products, but their battery technology can now help them fill that hole.

Without fresh insight or industry developments, it’s hard to predict what Dewalt is working on. Will we see new cordless miter saw sizes? I don’t think so.

Updated cordless miter saw models? Ooh, that would be a different question and a different answer.

That’s an area I think Dewalt is more likely to expand into, with new dust extractors or vacuums featuring wireless automatic activation. If or when new Dewalt Tool Control vacs hit the market, we might see Tool Control-enabled or connectable miter saws to pair them with.

But right now, until anything new comes to light, it’s just a guessing game.